Trump’s Iran Policy: How To Succeed In Uniting Your Allies and Adversaries Against You 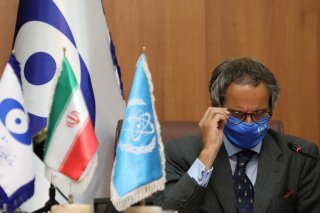 The waning days of August brought an unholy alliance between America’s staunchest allies and its two greatest adversaries. Americans barely noticed. Who can blame them? The nation is gripped by perhaps the most consequential presidential election since the Civil War, widespread protests, and an unyielding pandemic. Who cares what happens at the UN Security Council?

It matters because the Trump administration tried to pull a fast one, and the international community stood up and said, not so fast. U.S. officials invoked a controversial provision in the Iran nuclear deal called “snapback” to try to obliterate the agreement, once and for all, in hopes of forcing Iran to negotiate a tougher, more comprehensive deal. But leaving a void where there is now a structure is dangerous. The nuclear deal imposes constraints on Iran’s nuclear program and strict transparency requirements that are monitored and verified by the International Atomic Energy Agency (IAEA). IAEA oversight is like an early warning system, it gives the international community confidence that Iran is not seeking to acquire a nuclear weapon. If the deal collapses, and nothing replaces it, Iran’s nuclear program would become an ungoverned space, threatening greater turmoil in the region and much worse. With these stakes, the signatories to the nuclear deal must do a lot more to keep it operational: they must provide Iran economic incentives to resume full compliance.

There is reassurance in their determined rejection of snapback at the UN Security Council. France, the United Kingdom, Germany, Russia, and China argued that President Donald Trump withdrew from the nuclear deal in 2018, forfeiting the right to invoke snapback. Thirteen of fifteen Security Council members agreed. The president of the Council last month (a rotating position), citing the lack of consensus, delayed the process, and the Council’s new president wasted no time to announce he is maintaining that decision. U.S. officials may try again, but snapback is not the only potential executioner of the Iran nuclear deal. There are a few rushing currents carrying Tehran and Washington further away from re-engaging on a new deal, lending urgency to incentivizing Iran to remain bound by the current agreement.

In the best of times, it would be unrealistic to count on Iranian nuclear restraint. But the country is reeling from severe economic distress compounded by a raging pandemic crisis. Add to that mix the uncertainties of election-year politics in the United States and Iran, and it starts to border on negligence to think Tehran will remain bound by the nuclear deal without any economic incentives, until a new agreement can be negotiated. When might that negotiation take place? The result of the U.S. election may be contested well past November, and President Hassan Rouhani cannot run for a third consecutive term when Iranians go to the polls in June 2021. He would be a lame-duck when President Joe Biden, or Trump, takes office in January—assuming it is in January.

Biden has promised to re-join the nuclear deal and provide some sanctions relief if Iran resumes verified compliance, but that will not be as straightforward as it sounds. The Trump administration has shifted the political ground on Iran policy, and Democrats are divided on sanctions relief, a make-or-break issue for Iran. It would be difficult for any American negotiator to restore the sanctions status quo ante before starting talks with Iran, and equally difficult for the Iranians to accept less than that. Both sides will face a hostile audience back home, who will demand greater concessions of the other side but refuse to offer more to get them, or insist the other side meet certain pre-conditions before talks can even begin.

The best way to ensure Iran remains bound by its commitments until a new deal can be negotiated is for France, the United Kingdom, Germany, the European Union, Russia, and China, each a signatory to the agreement, to provide Iran economic incentives for resuming full compliance. For such an effort to succeed, three conditions are necessary: Iranian cooperation, a protracted stalemate on snapback, and unity on strategy and tactics. These conditions can be met.

President Rouhani recently reminded Washington that the door is open to talks on a new deal if the United States returns to the old one. Detailed IAEA reports also document that the country was fulfilling its commitments until May 2019. After that, Iranian leaders stopped waiting for the deal’s promised economic benefits and started loosening compliance. In response, both to register their concern and keep the deal operational, the Europeans launched the agreement’s dispute resolution mechanism in January, followed by an IAEA Board of Governors resolution in June calling on Iran to let inspectors into sites suspected of housing undeclared nuclear material—to which Iran recently agreed. It seems certain that the UN Security Council’s rejection of snapback played a part in Tehran’s decision to cooperate with the IAEA.

Snapback is stalemated at the Security Council for the moment. Trump administration officials argue that the U.S. right to snapback derives from UN Security Council Resolution 2231, which endorsed the nuclear deal, and not from the deal itself. It is a brittle reed of an argument. But there is no international body that can deliver a swift and authoritative ruling to demolish it. If the snapback process resumes, it would reinstate all UN sanctions on Iran lifted under the nuclear deal within 30 days. And here’s the rub: this unprecedented provision allows the party invoking snapback to merely assert “significant non-compliance” with the nuclear deal, but requires the international community to act on that assertion without any debate. Full compliance with the agreement is thus in Iran’s own interest. It would vitiate the rationale for reinstating UN sanctions. That, in turn, would cause the governments of UN member states, who must enact regulations authorizing compliance with the sanctions, to ask what behavior they were punishing. Sanctions are conduct-based, if there is no crime, why should anyone do any time?

Maintaining Iran’s cooperation will require unity among the Europeans, China, and Russia on strategy and tactics. Ironically, the unapologetic unilateralism of U.S. officials pursuing snapback has pushed Europe closer to China and Russia after months of disunity at the IAEA and the UN In mid-August, Russia and China voted no to the U.S. proposal to extend the UN arms embargo on Iran indefinitely. France, the United Kingdom, and Germany abstained. An abstention is the diplomatic equivalent of saying we disagree but won’t pick a fight. Considering Washington had spurned repeated European attempts at compromise, it was a restrained response. So it seemed the Europeans would take a similar approach to snapback. Instead, they fired a warning shot. In a letter to the UN Security Council president, leaked to the media, they declared as plainly as diplomatically possible that any decisions taken under the snapback process are devoid of legal effect. The unequivocal rejection of a U.S. initiative by America’s staunchest Western allies was shocking and brought Europe into closer alignment with Russia and China.

There can be no daylight among this group on providing Iran economic relief. And there is no sugarcoating the risk: the Trump administration will consider it highly provocative, even if Europe uses its Instrument in Support of Trade Exchanges, or INSTEX, created to legally circumvent U.S. sanctions. It may be possible, however, to moderate Washington’s reaction if Russia and China joined Europe in continuing to observe the UN arms embargo after it expires on October 18. With 90 percent of the U.S. House of Representatives urging the White House to extend the embargo, U.S. policy is unlikely to change. Europe, China and Russia should convince Tehran that resuming conventional arms trade would damage prospects for a new nuclear deal. While they are at it, collectively, they must also warn the Iranians that retaliation against snapback or failure to restore full compliance with the nuclear deal will cost Tehran their economic and diplomatic support. Iran’s cooperation is essential.

Failure is not an option. The collapse of the Iran nuclear deal could result in a number of scenarios are possible, all of them bad. If the deal’s collapse triggered a nuclear arms race in a Middle East already roiled by intense rivalries, the consequences would be unmanageable and potentially devastating for the region and the world. With the recent seventy-fifth anniversary of the United States dropping the atomic bomb on the Japanese cities of Hiroshima and Nagasaki, it is worth reflecting on the reasons the international community has worked so hard to prevent the spread of nuclear weapons.

Ferial Ara Saeed is a consultant at Telegraph Strategies LLC, focusing on analysis of political and economic trends for business and government to mitigate risk. A former senior American diplomat with expertise on North Asia and the Middle East, she worked on Iran policy during her career, including on Iran sanctions.