Trump’s Response to the Crisis in Northern Syria: A Case of Principled Realism in Action? 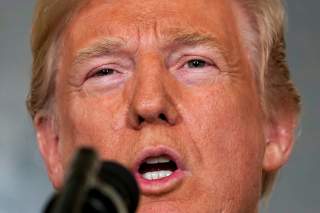 Henry Kissinger once said that “America has no permanent friends or enemies, only interests.” Unfortunately, the Kurds are currently experiencing the gravity of these words. President Donald Trump appears to be taking a page out of Kissinger’s ‘realism playbook’ with his abrupt decision to withdraw U.S. troops from northern Syria in anticipation of Turkey’s pending military operation. While arguing that the United States “does not endorse this attack,” Trump has nevertheless chose Turkey over the Syrian Defense Forces (SDF). How can we make sense of this decision? One approach is to look at the situation through the lens of the 2017 National Security Strategy’s concept of “principled realism” that is “guided by outcomes, not ideology.” When considered through this prism, Trump’s foreign-policy decisions have been more consistent than his critics think.

On October 9, 2019, Turkey’s President Recep Tayyip Erdogen announced Operation Peace Spring “to prevent the creation of a terror corridor across our southern border, and to bring peace to the area.” The military campaign is intended to create a thirty kilometer-wide “safe zone” that would eliminate what Ankara perceives as an imminent threat from PKK (Kurdistan Workers’ Party) fighters along its southern border and allow the settlement of up to two million Syrian refugees currently living in Turkey. Secretary of State Mike Pompeo acknowledged Turkey’s “legitimate security concerns” (the United States has designated the PKK as a foreign terrorist organization) and recognized the need to get U.S. troops “out of harm’s way” ahead of the pending military operation. Given this context, there were no “easy” or “cost free” options for the Trump administration to choose.

But how did we arrive at this decision in the first place? In response to the emergence of ISIS as a formidable fighting force in Iraq in Syria back in 2014, the United States frantically searched for options to work with regional partners. Former CENTCOM Commander Gen. Joseph Votel, who is now retired, eventually found the “answer” in the form of “a small band of Kurdish forces pinned up against the Turkish border and fighting for their lives against ISIS militants in the Syrian town of Kobane in 2014.” These forces were largely comprised of the Kurdish People’s Protection Units (YPG) and provided the foundation for the creation of the SDF that, with U.S. assistance including air support, served as the “defeat mechanism” in the fight to eliminate the ISIS physical caliphate. The SDF fought valiantly and their sacrifices included some eleven thousand casualties, compared with six U.S. service members and two civilians killed during the military campaign.

Votel laments the sudden change in U.S. policy and argues that a “hasty U.S. departure” threatens to destabilize Syria’s northeast and risks an ISIS resurgence. While his concerns are valid, the U.S.-SDF partnership forged during the Obama administration was always problematic and most national-security experts understood that Washington would eventually have to choose between Turkey and the Kurds. To be clear, Ankara does not distinguish between the PKK and the YPG and considers them all part of the same terror group and a national-security threat, so maintaining the status quo or offering half measures such as U.S.-Turkey joint patrols as a “security mechanism” proved unacceptable to Erdogen. In fact, U.S.-Turkey relations were likely to worsen the longer the situation persisted. Thus, Trump faced a dilemma and had to consider which option produced a better outcome for U.S. national security interests: continue working with the SDF and risk fracturing the longstanding relationship with a NATO ally, or abandon the Kurds (an ad hoc, albeit invaluable coalition partner in the fight to defeat ISIS) and risk perceptions of the United States as a feckless and unreliable security partner?

Moreover, Trump has made no secret of his desire to withdraw U.S. troops from the Middle East. He made a similar announcement in December 2018 that eventually led to the resignation of Secretary of Defense James Mattis. In addition to fulfilling a longstanding campaign promise, Trump argues that “we will fight where it is to our benefit, and only to win” while leaving it to others to sort out the security situation in their “neighborhood.” This is an example of “principled realism” in action where U.S. relationships and security commitments are expected to change in accordance with its national interests and desired outcomes.

Despite concerns that Trump is impulsive and “went off script” during his October 6 telephone call with Erdogen, it is more likely that he seized an opportunity to act upon these long held beliefs and strike an agreement with Turkey to deal with ISIS in the region. That said, his withdrawal announcement caught the administration by surprise; a consequence of the lack of any coherent interagency process. Predictably, Congress and regional and international allies and partners were confused by the unexpected change in policy and were quick to publicly express their concerns.

Sen. Lindsay Graham (R-S.C.) warned Trump against “American isolationism” and urged the administration to change course, while describing the Turkish military operation and U.S. troop withdrawal as a “disaster in the making.” He worked with Sen. Chris Van Hollen (D-MD) to spearhead bipartisan efforts to impose sanctions on Turkey that will face a likely presidential veto, but is indicative of the level of concern and frustration on Capitol Hill.

From a geopolitical perspective, former ISIS envoy Brett McGurk predicts that the consequences of Trump’s decision will be serious as it “strengthens the hands of our adversaries and competitors throughout the region and the world.” My Naval War College colleague, Hayat Alvi, argues that “Russia, Iran and the Assad regime will benefit greatly from American withdrawal from Syria; they all have wanted the United States out of Syria all along.”

As mentioned earlier, there are legitimate concerns of an ISIS resurgence amidst the ensuing violence and chaos from the military campaign. Trump is correct when he said that “the Kurds are fighting for their land” and SDF spokesman Mustafa Bali recently said in a tweet, “We will clash against the Turks to not allow them to cross the border. We will use all our possibilities against Turkish aggression.” Unfortunately, this raises the possibility that the SDF will reposition and concentrate its forces in northern Syria, potentially abandoning the detention centers such as the al-Hol camp where an estimated ten thousand ISIS fighters are held. Trump largely dismissed concerns about ISIS escapees by saying that “they are going to be escaping to Europe, that’s where they want to go. They want to go back to their homes.” That said, he also announced that the United States transferred two ISIS militants known as “the Beatles” out of Syria to a “secure location.”

Although Trump received assurances regarding Ankara’s commitment to protect civilians, the international community is currently bracing for an expected humanitarian crisis as Turkey’s military operation unfolds. The International Crisis Group warns that “a substantial Turkish incursion could meet with spirited SDF resistance and prompt new waves of refugees to flee to neighboring Iraq and even into Turkey.” In response to these concerns, UN spokesperson Farhan Haq said that “Civilians and civilian infrastructure should be protected. The secretary-general believes that there’s no military solution to the Syrian conflict.”

Finally, there are concerns about the reliability of the United States as a security partner. Coming on the heels of a rather muted response to alleged Iranian drone and cruise missile attacks against Saudi Arabian oil facilities, the image of the U.S. abandoning its Kurdish partners inspires little confidence in U.S. leadership for the region. Expressing anxiety regarding the credibility of U.S. security commitments to Israel against a growing threat from Tehran, former Israeli ambassador to the United Nations Dore Gold said that “I feel like a Kurd today.”

Trump’s announcement furthers the narrative that the United States is walking away from the Middle East and abandoning the so-called “Carter Doctrine.” The resultant power vacuum is fraught with uncertainty and danger as actors compete for power as evidenced by Erdogen’s decision to conduct launch a military operation in northern Syria. To mitigate these risks, the Trump administration should take steps to minimize the loss of life and reassure its regional partners.

That said, it is also the case that U.S. national-security interests are currently focused on countering the threats associated with great-power competition in other regions of the world. Whether one agrees or disagrees with Trump’s troop withdrawal decision, it is consistent with a “principled realism” approach that requires an assessment of U.S. relationships and security commitments commensurate with its interests and desired outcomes. Sadly, it appears that the Kurds are (once again) the unfortunate victims in this larger strategic calculation by Washington.

Jim Cook is an associate professor of National Security Affairs at the U.S. Naval War College. The views expressed here are his own.