The Trump Administration Denies that It's Fighting Iran in Yemen 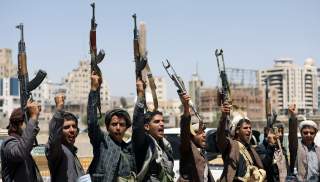 Trump administration officials have made a sudden about-face from trying to crush the Houthi rebellion to extending an olive branch to the Iranian-backed rebels in an effort to follow Saudi Arabia’s lead on the war in Yemen.

America’s involvement in the war has allowed Saudi Arabia to carry out a brutal siege on Houthi-held areas, where tens of thousands of civilians have died from air raids and starvation. Defenders of the war have always cited Iran’s support for the Houthis as a justification for the Saudi war effort.

But the Trump administration no longer considers the Shiite Muslim rebel group to be an Iranian proxy, according to State Department officials.

“Not all Houthis support Iran,” said Denise Natali, Assistant Secretary of State for Conflict and Stabilization Operations, at a Thursday morning briefing hosted by the newspaper Al Monitor.

“Iran clearly does not speak for the Houthis, nor has the best interests of the Yemeni people at heart,” said Brian Hook, U.S. Special Representative for Iran, at a press briefing later that day. “Iran is trying to prolong Yemen’s civil war to project power.”

In September, Hook had written about Iran “controlling and deploying” the Houthis as a “terror front."

The sudden policy change follows breakthroughs at the negotiating table between Saudi Arabia and the Houthi leadership.

But experts disagree on how accurate this policy change is.

“Both Iran and the Houthis rely on each other and have the type of relationship that allows them to further their own gains and without needing Iran to micromanage the process,” said Fatima Abo Alasrar, a nonresident scholar at the Middle East Institute. “Houthis have acted in the [Iranian Revolutionary Guards Corps’] self-interest in destabilizing the region more so than Yemen's national interest, and here lies the problem.”

“Therefore, portraying the Houthis as autonomous in their decisionmaking process is naive given the accumulative evidence of Iran's malign involvement,” she concluded.

“It’s about time the Trump administration woke up to the reality that the Houthis are not an Iranian proxy—something anyone who knows Yemen has known all along,” said Kate Kizer, policy director at Win Without War. “The State Department’s sudden about face on the Houthis completely undermines the administration's own arguments as to why fueling war crimes and the world's largest humanitarian crisis in Yemen is justified.”

State Department officials have privately believed that the decades-long Houthi rebellion was a problem created by Saudi Arabia rather than Iran since at least 2007, according to diplomatic cables published by WikiLeaks.

“The [Yemeni government] claims that al-Houthi followers envision a regime modeled after the Islamic Republic of Iran,” then-Ambassador Thomas C. Krajeski wrote from the U.S. Embassy in Yemen in February 2007. “This is still unclear, however, as the al-Houthi’s statements and military operations have focused mainly on control of Saada [in northern Yemen] in alliance with key tribes.”

Angie Bryan, then the Deputy Chief of Mission at the U.S. Embassy in Yemen wrote that an influx of Saudi-backed sectarian Sunni preachers had been “[o]ne of the deepest root causes” in “provoking the creation of the extremist Houthi organization” in an October 2009 cable.

“In the context of a battle for religious dominance between radicalized Shiites and Sunnis, a permanent conclusion to the Saada war is nowhere on the horizon,” she warned.

Saudi Arabia intervened in Yemen after the Houthis took Sana’a, the capital of Yemen, in 2015. Iran had initially warned the Houthis against their coup d’etat, but then began backing the rebels against the Saudi-led coalition.

Earlier this year, Congress passed a bill to cut off all support for the Saudi campaign, only for President Donald Trump to veto it.

During the December 2018 debate over the bill, Sen. Marco Rubio (R–FL) gave a speech defending the Saudi war effort as part of a struggle against Iran.

“I also recognize that there is a threat in the Middle East posed by Iran and their ambitions that must be confronted,” he said. “[The Houthis] are going to become what they are but in an expanded way—agents of Iranian influence and of Iranian-sponsored violence.”

“[T]he conflict in Yemen represents a ‘cheap’ and inexpensive way for Iran to cause trouble for the United States and for our ally, Saudi Arabia,” Trump wrote in an April 2019 statement vetoing the bill.

In May, the president declared a state of emergency to sell $8.1 billion in weapons to Saudi Arabia and other Arab monarchies without congressional approval. Secretary of State Mike Pompeo wrote at the time that the weapons would “help these nations to deter and defend themselves from the Islamic Republic of Iran.”

The State Department’s latest series of statements “shows that the so-called ‘emergency’ the administration declared to sidestep Congress and sell weapons to the Saudis and Emiratis earlier this year is fake,” Kizer said.

Last week, the U.S. Navy seized a stockpile of Iranian-made missiles that Iran was allegedly attempting to smuggle to the Houthis. But now that Saudi Arabia appears to be making serious progress with the Houthis, the Trump administration is downplaying the rebels’ connection to Iran.

Saudi Arabia sat at the table with the Houthis in Stockholm last year, but their agreement was “abysmal” at actually stopping the violence and “undoubtedly empowered the Houthis,” according to Abo Alasrar.

The war in Yemen reached a turning point in September. That month, a missile attack temporarily took down fifty percent of Saudi oil production capacity, and the Houthis captured an entire Saudi mechanized column.

The Houthis claimed September’s missile attack, even though the missiles were likely launched from inside Iran. Abo Alasrar called the incident evidence of Iranian involvement in Yemen.

A southern Yemeni force built up by the Saudi-led coalition also turned against the Saudi-backed government in Aden around the same time.

At the Thursday breakfast, Natali spoke about her trip to Yemen and the Persian Gulf “a few months ago” while describing the work of the State Department’s Bureau of Conflict and Stabilization Operations.

“We’re working on how to reintegrate former fighters that want to return to some of their homes. These are some Houthi areas,” she said. “Not all Houthis support Iran. How do we get people to be able to be accepted back and re-integrated into their communities?”

But Natali declined to provide more detail when asked about Iran’s role.

“I can’t speak to the Houthis and Iranians, but I can speak to what I saw and what my conversations were, which is the important role that Saudi [Arabia] plays in stabilizing parts of Yemen,” she said.

“Let me be clear about this also: The Saudis and the Houthis have always been talking,” former Ambassador Gerald Feierstein told Al-Monitor. “What has been changed, is the Saudis coming out publicly, saying, ‘Oh, by the way, we have a dialogue going with the Houthis.’”