Trump and Iran Talk Past Each Other On Coronavirus Aid 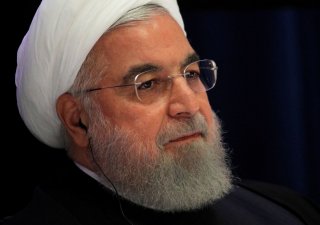 U.S. President Donald Trump said that he would be willing to offer Iran ventilators to help deal with the coronavirus on Sunday night, hours after Iranian central bank head Abdolnaser Hemmati asked for international financial aid.

The Trump administration had been pursuing a self-proclaimed campaign of “super maximum economic pressure” against Iran when the coronavirus pandemic struck. U.S. officials insist that the campaign does not blacklist food and medical shipments, but have also vowed to oppose a $5 billion International Monetary Fund (IMF) loan to help Iran cover its emergency expenses.

Iran would need an additional $10 billion “to contain the spread of the virus, strengthen our healthcare system and protect the frontline personnel in hospitals and elsewhere, and help our people who have lost their jobs,” Hemmati told Bloomberg News in an interview published Sunday morning.

The Iranian government has already allocated about twenty percent of its budget to fighting the coronavirus.

“We have not asked the United [States] for help!” the Central Bank of Iran governor added. “We have asked the IMF for support: an international, apolitical institution affiliated with the [United Nations], and for which, we were one of the founder members and contributors over the past 75 years.”

Sen. Dianne Feinstein (D–Calif.) and Rep. Ilhan Omar (D–Minn.) have both called on the Trump administration to approve the IMF request.

Trump was asked about Feinstein’s call for aid to Iran at a Sunday night briefing on the coronavirus.

The President speculated that Iran is waiting for the 2020 presidential election, claiming that “between them, China, Japan, Mexico, Canada, they would own America” under former Vice President Joe Biden.

The Trump administration has maintained its stance against the IMF loan.

“The world’s leading state sponsor of terrorism is seeking cash to fund its adventurism abroad, not to buy medicine for Iranians,” a State Department spokesperson told the National Interest on April 7. “The regime’s corrupt officials have a long history of diverting funds allocated for humanitarian goods into their own pockets and to their terrorist proxies.”

Hemmati also complained in his Bloomberg interview that U.S. financial sanctions have “limited” Iran’s access to its foreign currency reserve, much of which is held in foreign banks.

“The letter of credit for the purchase of coronavirus test kits from South Korea was rejected,” he wrote.