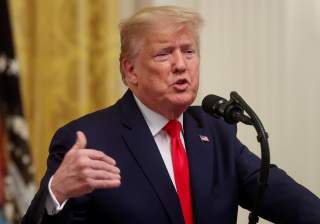 Millions of Iraqi citizens recently gathered together to participate in a "million-strong” march, the biggest demonstration during the history of Iraq in the capital Baghdad to demand the withdrawal of all U.S. forces. Al-Sadr, whose party holds the most number of seats in Parliament, seized on the public anger over the drone strike that killed Maj. Gen. Qassim Soleiman to call “a million-strong, peaceful, unified demonstration to condemn the American presence and its violations.”

On January 6, 2020, I attended the funeral of Suleimani, commander of the Quds Force of the Iranian Revolutionary Guards Corps, and Abu Mahdi al-Mohandes, the Commander of the Iraqi Popular Mobilization Forces, in Tehran. No well-orchestrated photographers or drone shots from above can do justice to the ocean of humanity present in their funeral processions. And Tehran was only one among many other cities that witnessed the funeral processions of Suleimani and his companion Abu Mahdi al-Muhandis. Millions of people mourned his assassination in Baghdad, Karbala, Najaf in Iraq, and in Ahwaz, Mashhad, Tehran, Qom, and finally his hometown, Kerman.

I have no doubt in my mind that his assassination will have an impact, not only on the future of U.S.-Iran relations but in the region and beyond. Here are twelve consequences I can point to in the aftermath:

First, the presence of roughly seven million people out of Tehran’s total twelve million population across twenty miles in the funeral procession of Suleimani shook the world. I, first-hand, witnessed the outrage and anger expressed by ordinary people chanting: “revenge, revenge. In his 2019 memo, David Wurmser, consultant to the U.S. National Security Council, suggested to the White House that many Iranians would welcome a strike on a senior commander such as Suleimani. This is clear evidence that illusions and delusions have prevented President Donald Trump from acknowledging reality and objective truths, which consequently have resulted in further delusions, and ultimately could result in actual tragedies.

Secondly, the Trump administration and the United States’ regional allies have insisted on mislabeling Suleimani and al-Mohandes as  “terrorists.” Even they could see the millions of people who participated in their funerals, marking the world’s largest memorial processions for any military figures. The phenomenal participation of ordinary people in those processions is the most telling evidence of their popularity and, incidentally, the pervasive anti-United States sentiments expressed. It simply shows that the Iranian Quds and the Iraqi Popular Mobilization Forces enjoy massive social support while U.S. forces in the region do not. Very soon after the U.S. military strike against Suleimani, Iraq’s populist Shia leader Muqtada al-Sadr has called for a “million-man march” against the presence of U.S. troops in Iraq, also right after the country’s parliament voted to expel foreign troops from Iraq. This vote came after U.S. airstrikes killed the two generals.

Third, not only state officials, but also the people of Iraq and Iran view the Quds and al-Hashd al-Sha’bi forces, along with Gen. Maj Suleimani and Al-Mohandes, on the forefront of combating terrorist groups such ISIS, Al-Nusra, and Al Qaeda. This fact was not hidden to the staunchest anti-Iran politicians—including Trump. For instance, in his remarks on January 9, he admitted that ISIS was an enemy of Iran. ISIS actually welcomed the assassination of Suleimani. The United States did what ISIS had failed to do for many years: assassinating two great military commanders who most successfully fought them. From this day forward, the majority of Iranians and Iraqis will not believe U.S. claims of fighting ISIS, but may, in fact, view Washington as a hidden or unwitting ally of ISIS. Let’s not forget that that before his ordering the assassination of Suleimani, Trump also had once said that the United States was responsible for having founded ISIS.

Fourth, Suleimani was a high-ranking Iranian official who had arrived in Baghdad upon the invitation of the Iraqi State. Interim Iraqi prime minister, Adel Abdul-Mahdi, made it clear that Soleimani arrived in Baghdad not to plan attacks on American targets, but to coordinate de-escalation with Saudi Arabia, and thus debunking Trump’s claim of “imminent attacks.” “I was supposed to meet Suleimani at the morning the day he was killed; he came to deliver me a message from Iran responding to the message we delivered from Saudi to Iran,”Abdul-Mahdi said. However, it is the first time in U.S.-Iranian relations that the U.S. government publicly assumed responsibility for the assassination of a senior Iranian military commander. In response, Iran attacked two major U.S. military bases. No country has been able to successfully attack a U.S. military base since the second world war. This is certainly an unprecedented event in the history of U.S.-Iranian relations, as Washington and Tehran have now apparently entered a military confrontation.

Fifth, it has been a year-and-a-half that the Trump administration has waged a vicious economic, security and political war against Iran, which in the wake of the recent military offenses, effectively morphed into a military confrontation. Once Iran militarily responded to the assassination of Suleimani, Trump said that Iran and the United States “should embrace peace” and that they can “work together” to fight ISIS. White House National Security Advisor Robert O'Brien said that he is convinced that Iran is more likely to return to the negotiating table since the United States killed Quds force’s leader. This is an illusion and a miscalculation: the assassination of Suleimani has made diplomacy much more difficult, and a viable deal with Iran far less likely.

Sixth, for a long time, U.S. officials accused Iran of having the blood of American soldiers on its hands. Let’s not forget that Iranians also believe the United States has Iranian blood on its hands, by unconditionally supporting Saddam Hussein’s war of aggression against their country and more recently by enforcing their inhumane sanctions. But by assassinating a top-ranked Iranian military commander, the United States simply created an undeniable proof of responsibility for shedding Iranian blood.

Seventh, the Trump administration has immiserated ordinary Iranians by causing unprecedented economic hardships through adopting a policy of “maximum pressure” on Iran. This has resulted in unrest in many cities in Iran, with tens of people killed or wounded. Domestic discontent with the economic climate of the country is casting doubts about the people’s participation in the 2020 parliamentary and 2021 presidential elections. By assassinating Iran’s most popular commander, Suleimani, Iranians came to the streets expressing the utmost sympathy and solidarity. As Ayatollah Ali Khamenei remarked, there has been a renewal of social unity and solidarity among the Iranian people, which ought to be preserved.

Eighth, the U.S. military invasion of Afghanistan, Iraq and Libya, its support for Saddam Hussein’s war of aggression against Iran, its alliance with Saudi Arabian in the war on Yemen and last, but not least, its support for the Israeli occupation of Palestine have led to the solidification of the “resistance forces” in the Middle East. Palestinian Hamas, the Iranian basij, the Yemeni Huthies and the Iraqi Hashd Al-Sha’abi are few among many others resisting U.S. and Israeli hegemony. Suleimani and al-Mohandes were the highest-ranking Iranian and Iraqi commanders of the resistance forces, and their martyrdom has created scars on the people’s hearts, thus institutionalizing a permanent grudge against the United States, whose actions and ensuing catastrophic consequences will continue to damage the region for decades to come. While it is true that the U.S. military is the most powerful in the world, it also has never won a guerrilla or asymmetric war, whether in an occupied country or otherwise. And it never will.

Ninth, Europe and NATO had already made major mistakes by either indirect support or direct participation in wars and military occupations in the Middle East. Their support of such an egregious assassination of the two high-ranking commanders of the resistance front will practically expose them to new major threats. Conversely, the Eastern powers, especially Russia and China and India, have seized this opportunity to gain favor by condemning the assassination and sympathizing with the nations of Iran and Iraq.

Tenth, the Iraqi prime minister confirmed that Suleimani “came to deliver me a message from Iran, responding to the message we delivered from Saudi Arabia to Iran,” he said in an interview with the Washington Post. It has been revealed that U.S. allies in the region, particularly Israel, were partners in the assassination of Suleimani and Abu Mohans. Prior to their assassination by the United States, Iran had proposed the Hormuz Peace Endeavor, or HOPE, in September 2019, which provided a golden opportunity for regional dialogue. This opportunity has been dramatically undermined.

Eleventh, Iran’s military attack on the U.S. military base in Iraq was the first official attack on U.S. facilities by any country in the post–World War II. The attacks, compounded with the downing of the U.S. drone earlier in 2018, eliminated Washington’s doubts about Iran’s countervailing capacities. Now, U.S. allies will understand better that they will be the main victims in the event of a war between Iran and the United States. Moreover, the Iraqi Parliament’s decision to expel U.S. troops from Iraq marks the start of a new movement against the U.S. presence in the region, which could lead to the gradual withdrawal of U.S. troops altogether.