Trump Might Be Right About NATO Engagement in the Mideast 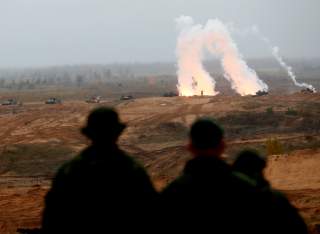 In his first White House address after the recent confrontation of the United States with Iran, President Donald Trump asked NATO to take a bigger role in the Middle East. His call for higher involvement in the processes of the troubled region was met with much skepticism. Yet, though many fail to acknowledge it, NATO and its European members have a stake in the events in the Middle East. By taking a more leading position in a region not so far away from Europe, the alliance has not only the chance to help in peace efforts but also to recalibrate its scope and capabilities in the face of increasingly hybrid and indirect threats and challenges.

Though different members of the organization may have diverging interests and concerns, everybody wants to prevent an escalation that could be devastating. Some of the suggestions floated by President Trump, including the possibility of expanding NATO to the Middle East is extreme and will likely be rejected a priori. But these wild suggestions should not distract from the concrete possibility of having an increased NATO presence and role in that region.

The North Atlantic alliance, with unparalleled military capabilities in the modern world, has served as a powerful deterrent against destabilizing activities and malignant actors in Europe, especially vis a vis Russia, and has contributed actively in the fight against terrorism. Now, with new challenges being presented in its close proximity, NATO has the possibility to gain capabilities in terms of strategic engagement in peace efforts and serve as a cohesive force in defusing conflicts that could indirectly affect many member states.

No one can negate the already great contribution in prior U.S. efforts in the Mideast. The first and only invocation of NATO’s Article 5, which enshrines the principle of collective defense, was after the Al Qaeda terrorist attacks of September 11. The military alliance actively participated in the Afghanistan campaign. More recently, NATO has been an integral part of the U.S.-led campaign in the fight against the Islamic State.

Yet, while so far NATO has participated with active deployments and ground presence in these missions, the complexity of some conflicts, such as the one with Iran, would promote the development of new capabilities beyond merely military ones. New capacities in conflict prevention and peace efforts would not be a result of an artificial goal, but rather a natural inclination stemming from the acknowledgment that modern security concerns have evolved.

A potential military confrontation or a fully-fledged war could have unintended consequences for Europe. Conflicts in the Middle East and North Africa have shown that they can have side effects on the security and stability of Europe. The wars in Syria and in Libya were accompanied by an influx of migrants that destabilized Europe and resulted in a humanitarian crisis that tore European consensus apart.

In reacting to the news of the death of Soleimani, NATO Secretary-General Jens Stoltenberg took a measured and careful approach due to the sensitivity of the moment and the risk of escalation. Both the United States and Iran have stated that they do not want a military confrontation but there is still the danger that unforeseen events and miscalculations could lead to war. The opportunity is there for NATO to get actively involved in Mideast peace efforts.

Many Europeans might be skeptical about this new dimension of NATO but it is worth highlighting that European powers could elevate their geopolitical position and address security concerns through it. The need to revamp the military union has been emphasized by European leaders. French president Emmanuel Macron’s provocation with his characterization of NATO as an organization “experiencing a brain death” aimed to increase awareness about the need for the recalibration of its role and mission.

For many decades, NATO has served as a peace tool that deterred hostile actors with its military might. In an increasingly changing world and with new complex challenges that asymmetrically and indirectly affect its members, the alliance needs to develop and enhance its capabilities in conflict prevention, conflict resolution, and peace efforts. By doing so, it could serve as a strategic force in containing current and future conflicts that could threaten the security and stability of its member states. The current Mideast is a good place to start.

Akri Çipa is a foreign policy expert and researcher specialized in the Balkans and the Middle East. He holds a Master of Science degree in Negotiation and Conflict Resolution from Columbia University in New York. He can be found on Twitter @AkriCipa