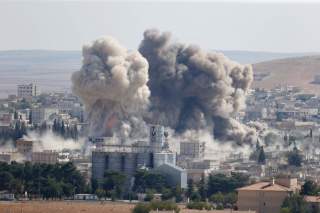 Although President Donald Trump has taken credit for the defeat of the Islamic State of Iraq and Syria (ISIS) in its self-proclaimed capitals in Mosul, Iraq, and Raqqa, Syria, he has wisely refrained from declaring overall victory. However, the Trump Administration’s recent policies risk making victory over ISIS and its ideology of Salafi-jihadism nearly impossible.

The U.S.-led coalition's routing of ISIS in Raqqa and Mosul has neither brought about the demise of ISIS nor eliminated the ideological or militant threat of Salafi-jihadism. ISIS is still active in parts of Syria and Iraq, and a significant number of its members have joined other sister Salafi-jihadi organizations. While it is true many ISIS members have been killed, some have managed to escape or were given exit under certain terms of surrender. In fact, thousands were allowed to leave to Idlib province from Raqqa and ISIS strongholds in Lebanon. More importantly, the al-Qaeda-affiliate in Syria, the al-Nusra Front, has rallied its forces in Idlib province. Furthermore, al-Nursa was operating recently as an umbrella organization for various Salafi-jihadi organizations under the label Hay’at Tahrir al-Sham.

In addition to al-Nursa, in some areas, similar Salafi-jihadi groups operate with tacit or explicit support from Arab Gulf countries and Turkey, such as Ahrar al-Sham and Jaysh al-Islam. As a result, Idlib province has arguably emerged as the new hub of Salafi-jihadism. Tens of Thousands of jihadis committed to the murder of unbelievers, at the forefront of whom are the Americans. These terrorist groups are setting deep roots in Idlib and are sending off hundreds of seasoned jihadis overseas to help expand the power of their affiliate organizations throughout the Muslim world.

In the meantime, the Trump administration has reoriented its national defense strategy in which inter-state strategic competition, not terrorism, has become the primary concern. The strategy refers to China and Russia as strategic competitors flouting international law and order and specifies Iran as the most significant challenge to Middle East stability. The administration is right in underscoring the threats and challenges arising from these countries. Yet, the administration is committing a serious strategic mistake in facing off China, Russia, and Iran at the same time while relegating the war on terrorism to a secondary priority.

Moreover, the apparent U.S. campaign to remove the Iranian regime constitutes an undoubtedly fresh fodder to the aid of Salafi-jihadism. This is true and comes with mounting tensions between Washington and its allies, the cumulative effect of the trade war between the America and China, the growing acrimonious relationship between America and Russia. Central to this is whether or not the United States can meet all these challenges and still lead an international campaign to contain or reduce to a minimum the threat of terrorism. Clearly, Washington cannot.

Even as America was leading the campaign to defeat ISIS in Syria and Iraq, Salafi-jihadi organizations have expanded their power and their transnational networks throughout the globe. Dozens of Salafi-jihadi organizations from Central Asia, North Africa, the Sahel region, the Indian subcontinent, and Southeast Asia have pledged their allegiance to ISIS or al-Qaeda. Additionally, ISIS and al-Qaeda have been making an effort to enhance their operational command throughout those regions. These specific places include; the Sinai, Libya, Yemen, Somalia, the Sahel region, Nigeria, Afghanistan, Pakistan, and the Philippines. This is manifested not only in sustained terror operations in weak or failed states but also in attempts to establish new capitals and transnational networks in stable countries.

In May of 2017, ISIS-linked groups from four terrorist groups—Philippine Abu Sayyaf, Islamic State of Lanao, Ansar Khilafah and Bangsamoro Islamic Freedom Fighters—took over the major city of Marawi in the southern Philippines. The fight for Marawi raged for months and reflected the intense military campaigns that the ISIS had supported outside Syria and Iraq. Although Marawi fell back into government hands, ISIS’s acts of terror against government authorities have continued unabated, with the most recent one taking place on July 4, 2018. Twenty members of the country’s armed forces were murdered. No less significant, ISIS and al-Qaeda are reinforcing their transnational networks by linking Salafi-jihadi and Islamist groups throughout Southeast Asia.

The Trump administration's strategy to address inter-state competition, Iran, and North Korea all at the same time, while butting heads with allies, will surely undermine partnerships to protect the homeland and safeguard the international order. No less significant, the administration will have inadequate international support in tackling the socio-economic and political grievances moving some Muslims to join Salafi-jihadi organizations. Salafi-jihadism has grown exponentially since September 11, and the fight against ISIS and al-Qaeda has regressed in many countries. It behooves the administration to compartmentalize and balance its relationships with both allies and competitors. This is necessary to enhance international efforts to battle and contain Salafi-jihadism on political, ideological and military levels. Also, this constitutes the main challenge to the administration and the main immediate threat to American citizens. Therefore, disabusing itself of the illusion that ISIS or Salafi-jihadism has been defeated in Syria, the Trump administration should reorder its priorities by leading a campaign to snuff out the gathering storm of terrorism in Idlib, Syria.

Robert G. Rabil is a professor of Political Science at Florida Atlantic University. He is the author most recently of The Syrian Refugee Crisis in Lebanon: The Double Tragedy of Refugees and Impacted Host Communities (2016); Salafism in Lebanon: From Apoliticism to Transnational Jihadism (2014); and White Heart (2018). He can be reached @robertgrabil.

Image: Smoke rises after an U.S.-led air strike in the Syrian town of Kobani October 8, 2014. U.S.-led air strikes on Wednesday pushed Islamic State fighters back to the edges of the Syrian Kurdish border town of Kobani, which they had appeared set to seize after a three-week assault, local officials said. The town has become the focus of international attention since the Islamists' advance drove 180,000 of the area's mostly Kurdish inhabitants to flee into adjoining Turkey, which has infuriated its own restive Kurdish minority-- and its NATO partners in Washington -- by refusing to intervene. REUTERS/Umit Bektas (SYRIA - Tags: POLITICS CONFLICT TPX IMAGES OF THE DAY).