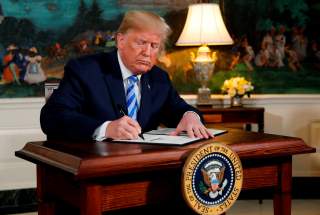 “Then there were none” was Agatha Christie’s most memorable mystery about a house party in which each guest was killed off one by one. Donald Trump’s policy toward Iran has resulted in much the same: a vanishing one by one of American partners who were previously supportive of U.S. leadership in curbing Iran, particularly its nuclear program.

Dozens of states, painstakingly cultivated over decades of American leadership in blocking Iran’s nuclear capability, are now simply gone. One of America’s three remaining allies on these issues, Saudi Arabia, has become a central player in American strategy throughout the Middle East region. But the Saudis, because of the Jamal Khashoggi killing and other reasons, may have cut itself out of the action. The United Arab Emirates, so close to the Saudis, may also fall away.

Such paucity of international support has left the Trump administration dangerously isolated. “America First” should not mean America alone. The United States risks losing the cooperation of historic and proven allies in the pursuit of other U.S. national security interests around the world, far beyond Iran.

Who done it? It is no mystery. The Trump administration’s withdrawal last spring from the Iran nuclear agreement caused the death of support for U.S. policy. That agreement had been negotiated with Iran by six major world powers and the European Union. It was fully endorsed by the UN Security Council and received overwhelming support from the UN’s member states.

European allies share many of our concerns about Iran’s regional activities, but they strongly oppose U.S. reinstitution of secondary sanctions against them. They see the Trump administration’s new sanctions as a violation of the nuclear agreement and UN Security Council resolutions and as undermining efforts to influence Iranian behavior. The new sanctions and those applied on November 5 only sap European interest in cooperating to stop Iran.

The mounting European and Asian opposition to U.S. overreach is also stirring deeply-held concerns about the dominant role of the U.S. Treasury and the overwhelming power the U.S. dollar plays over the world’s economic system. For the first time, our European allies are actively working to circumvent the U.S. Treasury, sanctions and dollar.

Moreover, Russia, China and others in Asia delight in seeing further division of the Western Alliance and the loss of American leadership.

Without international backing of its Iran strategy, the Trump administration is deprived of the political and diplomatic partnership required to achieve its objectives in the Middle East. The United States alone cannot permanently prevent Iran from acquiring a nuclear weapon; block Iran’s export of ballistic missiles; end Iran’s support for Hezbollah threats. Covert or military action won’t help us achieve our objectives. Only well calibrated multilateral political, economic and diplomatic pressure brought to bear on Iran with many and diverse partners will produce the results we seek.

More urgently, the release of American citizens from Iran’s prisons will only happen through direct, quiet U.S. diplomacy. This must be built on an improved bilateral environment, not the heightened hostility of the administration’s unilateral, extreme pressure.

There is no question that the administration’s go-it-alone strategy has damaged Iran’s economy and increased internal discord. But this outsized pressure has emboldened Iran’s hardliners, other states in the region and Iran’s population, a dynamic that is not advantageous to us. In the past, such an approach has not resulted in bringing about a more reasonable, pliable or cooperative government in Tehran—much less one that will decide to return to the negotiating table with the United States.

The United States cannot provoke regime change in Iran any more than it has successfully in other nations in the region. And, drawing on strategies used to topple governments in Iraq and Afghanistan, the United States should be wary of launching or trying to spur a military invasion of Iran.

The now severely damaged partnership with the Saudi crown prince, on which the Trump administration has relied to carry out an already flawed strategy, underscores the need to return to a genuine multilateral alliance.

The United States can succeed in reaching its objectives with Tehran only through the deliberate cultivation of broad partnerships based on leveraged and patient diplomacy. And many partners are better than none.

Thomas R. Pickering is a former U.S. ambassador to the United Nations, Russia and India.