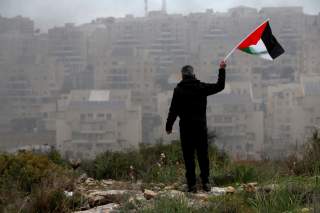 In the coming weeks, Palestinians and their allies are expected to push a UN Security Council resolution condemning President Donald Trump’s Middle East “peace plan.” The plan, welcomed by Israeli premier Benjamin Netanyahu and opposition leader, Benny Gantz, teases the prospect of Palestinian statehood. In theory, there would be a capital in suburban East Jerusalem and an area twice the size of what the Palestinian Authority and Hamas currently control. But, in exchange, the Palestinians must give up claims on West Bank settlements and land, as well as most of Jerusalem.

The plan has been commended as reasonable and generous by some Western observers, though it’s not dissimilar to one proposed twelve years ago by Israeli leader Ehud Olmert. But one thing’s certain: there’s no way it will fix the modern world’s longest-running conflict.

It seems the plan is Trump and Netanyahu’s effort to make good on their repeated pledges to address this crisis. Of course, it was announced at a time when both leaders faced scandals—and while Trump has since survived his impeachment trial, Netanyahu continues to face corruption charges. They’re also both facing upcoming elections. By simply providing a detailed plan, then, they can assert their diplomatic credentials to supporters, even if it was always inevitably going to be rejected by the Palestinians.

And this deal won’t accomplish much besides that. It requires major concessions that Palestinians have already been urged to make—which they’ve refused. Plus, it came at the same time as Israel’s formal annexation of more West Bank land, as well as Israeli officials’ downplaying of the promise to temporarily freeze further settlement activity if the Palestinians agree to the deal. But even if they do, the deal demands the allaying of Israeli security concerns, the entrenchment of democratic institutions in Palestine, and guarantees of civil rights. None of these prospects are realistic.

Indeed, there’s a reason there hasn’t been an election in the Palestinian territories since 2006: Israeli, Palestinian and Jordanian agencies alike conclude that, if there were, Hamas would win in both the West Bank and Gaza. The Palestinian Authority’s West Bank-based Fatah government, keen to hold onto power, is deeply unpopular and accused of widespread corruption. That could explain why it hasn’t held an election in fourteen years, despite claiming a desire to do so. And a Hamas-run Palestinian state will never be accepted by Israel since the terror-group-turned-political-party’s chief business model is to lob rockets at Israel before seeking international sympathy and support from their foreign backers whenever Israel retaliates.

And even if an incumbent Palestinian government wanted to allay Israel’s security concerns, it’s doubtful it could. In 2000, then-Israeli leader Ariel Sharon visited the disputed temple mount and Al-Aqsa mosque complex in Jerusalem after receiving assurances from the Palestinian Security Chief that it would cause no problems. What followed were widespread protests, escalating bloodshed and militancy, which claimed thousands of lives. So tenuous is the idea of a stable Palestinian state that the Egyptians—by no means friends of Israel—have asked for a “buffer” of Israeli-controlled territory between Egypt and territory the deal would cede to Palestine at its border.

For decades, there has been a massive trust deficit between the conflict’s two sides. Palestinians lost trust in any deal after the Oslo Accords didn’t deliver the outcomes they hoped for and faced sluggish progress in their implementation. And Israelis who’ve witnessed the “second intifada” and election of Hamas in Gaza years after Israel pulled out of that territory aren’t buying it, either.

Addressing this issue could take generations. Instead of an unfeasible deal, what’s most likely to actually help in easing tensions are joint initiatives and programs that allow Israelis and Palestinians to work together—building trust, cooperation and the goodwill necessary for any future arrangements. But an unfeasible proposal that amounts to little more than political theater from embattled politicians certainly won’t do much at all.