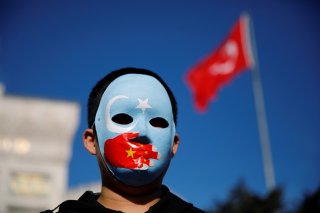 “The incidents in China are, simply put, a genocide. There’s no point in interpreting this otherwise,” said Turkish leader Recep Tayyip Erdogan in 2009, almost twelve years before the United States applied that label to the Chinese government’s treatment of Uyghurs in the country’s northwest Xinjiang region. As a growing number of countries join Washington’s vocal criticism of Beijing, Ankara appears to be pulling a volte-face, not only silencing its criticism of the Chinese government but also strengthening its bilateral partnership. This spells trouble for the 50,000 Uyghurs who have taken refuge in Turkey as well as their 12 million brethren back in China.

When Chinese Foreign Minister Wang Yi visited Turkey last month to meet with President Erdogan, Tukey’s foreign minister announced that the two countries would like to take their relations to “a level of strategic partnership.” This comes on the heels of accusations by Turkish and foreign analysts that China has bought Turkey’s silence on the Uyghur issue, the way Beijing has also done with many other Muslim-majority states. China and Turkey have a yuan-lira swap deal dating back to 2012, and Beijing has invested heavily in infrastructure projects, including grabbing a 65 percent stake in Turkey’s third-largest container port in Istanbul.

Turkey’s Uyghurs know best the potential ramifications of Ankara’s deepening ties with Beijing. Hundreds of Uyghurs staged protests in Istanbul and Ankara during Yi’s visit, demanding the Erdogan government take a stronger stance against China. This embarrassed Erdogan, who has presented himself as the leading patron and defender of Turks and Muslims worldwide. Given Turkey’s ongoing financial meltdown, and Ankara’s desperate need for Chinese capital, however, Erdogan has little room for maneuver. So instead of heeding the Uyghurs’ calls, Turkey’s increasingly authoritarian president will do what he knows best by cracking down on Uyghur asylum seekers the way he also does with Turkish dissidents.

Ahead of Yi’s Ankara visit, for example, Turkish authorities placed Seyit Tumturk, the chairman of the East Turkistan National Assembly—an Uyghur advocacy platform established in 2018—under house arrest under the pretext of a Covid-19 quarantine. In protest, Tumturk tweeted that he was perfectly healthy and pointed out that the quarantine order conveniently coincided with the Chinese foreign minister’s arrival.

In January and February, the Turkish police tried to prevent Uyghur protests by citing both public health and security concerns, and released detained demonstrators on the condition that they end their protests outside the Chinese diplomatic missions in Istanbul and Ankara. Turkish officials have gone as far as to suggest Washington is manipulating the Uyghurs to create a pretext for conflict with China. In February, following another round of arrests of Uyghur protesters in Ankara, Turkey’s interior minister warned Uyghurs not to fall prey to “overseas plans,” a Turkish euphemism for U.S. meddling.

The Erdogan government’s attempts to silence the Uyghur community extend to the Turkish parliament, where the government’s indifference to the plight of the Uyghurs continues to draw criticism from Turkey’s opposition leaders. An opposition motion for a parliamentary inquiry into China’s treatment of the Uyghurs failed when Erdogan’s Islamist-rooted Justice and Development Party and its ultranationalist coalition partners voted in unison to block it. An opposition lawmaker has even accused the government of selling out the Uyghurs in exchange for immediate access to the coronavirus vaccine developed by China’s Sinovac. Ankara has ordered 100 million doses of the vaccine, but received only 18 million so far instead of the 50 million that Beijing promised by the end of February.

China has also been taking other steps to increase the legal pressure on the Uyghur diaspora in Turkey. Last December, Beijing ratified an extradition treaty Turkey and China signed in 2017, raising concerns that Ankara’s ratification would put Uyghur asylum seekers at risk. There is already evidence that China has been demanding the extradition of specific Uyghurs in Turkey. The Turkish government also received criticism from Uyghur activists for sending the refugees to third countries like Tajikistan, from which it is much easier for the Chinese to extradite them.

The disappearance of the members of Turkey’s Uyghur diaspora has raised further concerns about the safety of Uyghurs in Turkey. Many suspect Beijing is behind such incidents and that the Chinese have pressured Ankara to either utilize the Turkish police or allow Chinese operatives to roam freely within Turkey’s borders to harass the Uyghurs. China’s similar pressure on other governments to intimidate, detain, and deport Uyghurs strengthens such suspicions.

Turkey’s ongoing drift away from its NATO allies and transatlantic values and the country’s troubling economic trajectory will offer China greater political and economic leverage over the Erdogan government and thereby exacerbate the pressure on Uyghurs. As Turkey’s NATO allies continue to increase pressure on Beijing by introducing sanctions against senior Chinese officials, Ankara is set to remain an outlier.

The Erdogan government’s reluctance or inability to join its treaty allies in their condemnation of China’s abysmal treatment of the Uyghurs speaks volumes about the state of Turkish democracy in a country where almost the entire nation supports the Uyghur cause. China’s hope is that Erdogan will sustain his iron grip over Turkey and continue to muzzle reactions from Turkish citizens and Uyghur refugees. The deepening courtship between these two authoritarian regimes will only intensify the plight of Uyghurs in both countries.

Aykan Erdemir is a former member of the Turkish parliament and the senior director of the Turkey program at the Foundation for Defense of Democracies. @aykan_erdemir

Umut Can Fidan, a student at the George Washington University, is an intern at the Turkey Program of the Foundation for Defense of Democracies.