Turkey’s Intervention in Syria and the Art of Coercive Diplomacy 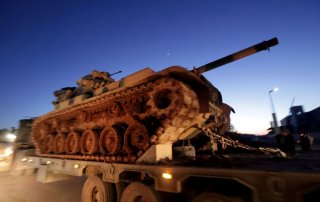 Turkey’s military intervention in Syria two weeks ago was launched amid a devastating and still ongoing humanitarian crisis in Idlib, where more than 700,000 people have been displaced since December according to the United Nations. Idlib is the last remaining rebel stronghold in Syria; its fall would cement a victory for the Assad regime after nine years of conflict and subject its population of 3 million to brutal repression. It was just four years ago that Bashar al-Assad vowed to recapture every inch of territory the regime had lost.

But Turkey’s military intervention and bold, if not audacious, assertiveness has delayed those plans and revived Turkey’s credibility and capacity as a major belligerent in a conflict that was on its way to becoming a full-fledged victory for Russia and Iran. Turkey now has an opportunity to reinforce its negotiating hand with the Assad regime and Russia, Assad’s principal patron, both to prevent Idlib’s fall as well as to secure other concessions related to the humanitarian needs of its devastated population.

Turkey’s operation was launched in response to the Assad regime’s expansive military campaign to retake Idlib, which would have resulted in a catastrophic humanitarian crisis with dire implications for Turkey’s own borders and domestic politics. Ankara has already accepted millions of Syrian refugees, much to the dismay of some segments of its population and political class. Turkey’s operation was limited in this sense, focused as it was on the humanitarian crisis rather than reinvigorating the rebel insurgency (and war) to generate a costly and risk-ridden momentum that eventually threatens the survival of the regime in Damascus.

However, the intervention could allow new possibilities to manifest both on the battlefield and at the negotiating table. The Idlib intervention has enabled the space for coercive diplomacy: Ankara’s use of force has established a red line that has, for now, prevented Idlib’s fall while also potentially strengthening Turkey’s negotiating hand in future bilateral interactions with Russia.

Although Western inaction in recent years has centered on apprehensions toward provoking a conflict with Russia, Turkey’s airstrikes have outlined how such constraints were to some degree self-imposed and maybe even disconnected from the calculus in Moscow.  Ankara inflicted substantial dilapidating damage to Assad’s armed forces, including regime loyalist militia groups and Iranian proxies amid the total absence of Russian jets during the course of its military engagement.

Indeed, Russia does not want to engage its rivals in Syria directly, much less become engulfed in a war with the West and its allies. Like the West, there were a whole host of constraints and risks that Moscow faced when it intervened in Syria in 2015 but it was never given the opportunity to either overestimate its military capabilities or revise its policies under the pressure of decisive Western action, which was limited to the war on ISIS. Moscow then went on to have it both ways, securing the survival of the regime (its foremost objective) and then still continuing to empower and enable its ongoing repression of the Syrian population.

It might be the case that Ankara has not achieved all of its objectives in Idlib, but it has delayed the restoration of regime control over the area. Last week’s ceasefire agreement with Russia creates a buffer zone along the strategic M4 highway that dissects Idlib province and will be policed by joint Turkish-Russian patrols but does not provide for the withdrawal of Syrian troops from newly captured territory.

It is doubtful that the agreement will last, given the regime’s determination to retake the area. Thus the question is whether Turkey can capitalize on the momentum generated by its intervention to achieve a form of coercive diplomacy that is focused around the threat of the use of force. Coercive diplomacy is designed to make an enemy stop or undo an action, either with or without resorting to military action. What is essential is ensuring the threat of force is credible enough to compel adversaries to comply with the coercing party’s demands. Once force is used (as in the Turkish case), it demonstrates to rival belligerents a resolution and willingness to escalate the dispute militarily, thereby producing escalatory steps that can be either advanced or reversed depending on how the target actor responds.

This differs from the conventional use of force in situations where diplomacy may be on the margins or discarded altogether and where the use of force is designed to be decisive and at times overwhelming to achieve military objectives. Moreover, coercive diplomacy differs from deterrence because it is not a strategy that threatens adversaries to dissuade them from undertaking hostile actions that have not yet been initiated.

In other words, Turkey’s intervention and future use of force can now be integrated into a diplomatic strategy that has clear demands, like preventing the fall of Idlib to the regime for example. That may force the Assad regime and Russia to make a cost-benefit calculation for any future effort to retake Idlib, one that would not have taken place in the absence of Ankara’s military intervention two weeks ago. Another similar intervention by Turkey could be more intense and inadvertently take on a momentum that disrupts the stability of the regime itself. These are calculations that the regime and Russia have not had to make before.

Turkey has also exposed its rivals’ shortcomings that could be exploited. For starters, the intervention showed that Moscow can be negotiated with and pressured if military force is leveraged. The intervention will be an important example and case study of what an intervention could look like in the future, whether it is conducted and led by Turkey, the United States or both, in the sense that regime onslaughts can be contained provided military engagement is confined to a framework that is either explicitly or implicitly agreed with Russia.

Secondly, the intervention has shown that the Syrian regime is heavily dependent on its foreign patrons and is ill-equipped to stave off foreign interventions unless it is insulated by Moscow, especially over its skies. If ever there was any hope within and beyond regime circles of establishing greater autonomy and independence away from the shackles of Moscow and Tehran, those have now been shattered for the foreseeable future.

What might develop is a much greater Russian stranglehold over Damascus, making sure that all roads towards any settlements (short and long-term) goes through Moscow but also a greater urgency in Moscow to achieve a lasting ceasefire and settlement for Idlib. Of course, only time will tell if Russia now takes Turkey’s concerns seriously, given its record for breaching previous ceasefire agreements with Ankara.

There is still heavy lifting for Turkey to do, and indeed the United States. Both Ankara and Washington have mutually beneficial interests in Syria: preventing the regime’s resurgence and restoration of control over the country in its entirety; keeping Iran’s influence at bay; and delaying a postwar settlement that allows for the flow of external funding for Syria’s post-conflict reconstruction, which may also result in the regime’s reintegration into the international community.

As it stands, there is consensus in Washington and Ankara that ceding rebel-held enclaves to the regime and restoring its sovereignty over those areas will undermine these objectives and worsen the refugee crisis (one of Turkey’s principal concerns). But the United States is unwilling to commit its forces and resources to Idlib, which is dominated by jihadi groups comprised of around 90,000 fighters, much less force a reversal of the substantial gains the regime and Russia have made. Moreover, the alliance between Turkey and the United States is still strained by Turkey’s PKK conflict and U.S. dependency on its Syrian sister-organization the YPG, in addition to Ankara’s purchase of Russian S-400 missiles.

It is inconceivable that Turkey’s military intervention will open up fresh prospects of reviving the U.S.-Turkey alliance, at least not on a sustained basis. But that does not mean the United States should not evaluate how it might respond and engage the Idlib crisis the next time there is another Turkish intervention and another round of conflict with the Assad regime. Foresight is forearmed: Turkey’s intervention may not have been transformational, but its offensive has added another layer to a war that is far from over and that may yet produce opportunities for Washington in unexpected ways.

Ranj Alaaldin is a Fellow at the Brookings Institution in Doha and Director of the Carnegie Corporation's Proxy Wars Initiative.