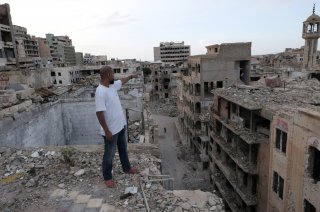 Last week’s ceasefire in Libya might have seemed almost inconceivable just a few months ago. Yet hard work remains to translate this positive step into something more durable—both for Libyans most affected by the fighting and for stability in a region vital to U.S. national security interests.

Washington largely has maintained its “lead from behind” approach in Libya ever since initially helping overthrow Muammar Gaddafi in 2011. This approach has become steadily more untenable since spring of last year, when the eastern-based Libyan National Army (LNA) sought to bring down the rival Government of National Accord (GNA) based in Tripoli.

This ambitious offensive pushed the GNA to the ropes and compelled it to seek military salvation from Turkey last November. Ankara was quick to inject weapons and advisers, which swung the battlefield pendulum back toward stalemate. But this came with a hefty price. Tripoli signed an agreement demarcating exclusive economic zones (EEZ) with Turkey that purported to recognize Ankara’s vast offshore claims in the increasingly energy-rich Eastern Mediterranean.

Turkey’s intervention should have catapulted Libya into a major crisis point for the United States, for multiple reasons. Its maritime boundary deal with Tripoli directly and intentionally contravenes existing Greek and Cypriot EEZs that are based on international law. It also would block a planned natural gas pipeline to Italy from these countries and possibly Israel.

This undermines U.S. policy to peacefully develop the region’s natural resources and reduce Europe’s dependence on Russian natural gas. In recent months, Turkey also has provoked crises at sea with NATO allies Greece and France to enforce its own illegitimate EEZ claim and top off the GNA with weapons, in violation of a UN arms embargo.

These actions in turn helped provoke the rival LNA’s supporters—chiefly Russia but also France, the UAE, and Egypt—to ramp up their own military efforts in Libya. In Russia’s case this includes advanced fighter jets, air defenses and “little green men,” similar to those in Ukraine. Indeed, both sides have poured in thousands of mercenaries.

Combined with Turkey’s distancing from NATO, and with its own permanent lodgment in Syria, Moscow’s new Libyan foothold threatens the transatlantic alliance with encirclement from the southeast. It also would represent a major setback for America’s strategic focus on great power competition.

Geopolitics aside, the escalating violence on the ground deepens the Libyan humanitarian crisis, especially considering how the conflict has dislocated populations and destroyed the country’s fragile public health infrastructure right as coronavirus hit. Without a stable long-term solution, the crisis could spread outward and send larger refugee flows to Europe.

If nothing else, the ceasefire is a welcome respite from many of these troubles. But for it to become an inflection point toward stability, the United States must fulfill Secretary Mike Pompeo’s recent pledge and apply “all the tools in its diplomatic arsenal” toward peace.

The good news is neither side in Libya can impose total victory by force, making it unlikely that the frozen frontline shifts radically. The bad news is Turkey and Russia can use this stalemate to divide the country between themselves, as they have in Syria despite also clashing there.

To borrow a phrase from National Security Advisor Robert O’Brien, an “active, but neutral” United States can be so crucial—if only it were indeed active. That is why Washington should engage its formidable diplomatic resources and appoint a Special Envoy for the Eastern Mediterranean.

He or she would bring unique leverage toward addressing the Libya conflict and its regional implications. Unlike Turkey, Russia, and others, the United States has not alienated Libyan leaders or average citizens through any military intervention or efforts to control economically vital natural resources. Instead, both the Obama and Trump administrations have consistently supported the agreed UN framework for a negotiated settlement on security, economic and political issues in Libya.

And unlike Germany and the EU, whose diplomatic efforts have been commendable but essentially fruitless, the United States can wield real leverage in the Eastern Mediterranean. An American envoy could make clear to Ankara that Washington views Greece or Cyprus as viable alternatives for relocating U.S. military assets currently deployed in Turkey.

The United States also should build on existing initiatives by its local partners to promote peaceful, collaborative exploitation of regional energy resources. An envoy could offer Turkey to join such efforts if it renounces its EEZ deal with Tripoli—which also would simplify peacemaking in Libya—and stops its provocative energy exploration in contested waters around the Eastern Mediterranean.

America has let Turkey and Russia dominate the conflict in Libya. There will be no peace if they are allowed to dominate the ceasefire as well.