Turkey Must Choose the Tough Option and Leave Syria 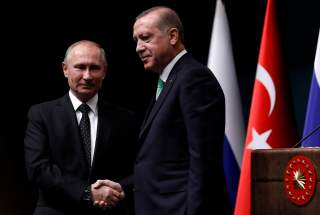 On September 17, Erdoğan reached an agreement with Putin at a meeting in Sochi to create buffer zones between government forces and those of the opposition confronting each other in Syria’s northwestern province of Idlib in a bid to stave off an imminent regime offensive on the remaining rebel enclave. This may have postponed the military showdown for the moment but is unlikely to lead to a lasting solution as the regime of President Bashar al-Assad supported by Russia and Iran is intent on subjugating Idlib. Turkish options in Syria are limited as the Russians seem intent on helping Assad to establish control over Idlib and surrounding areas. Additionally, recent large-scale Russian naval deployments off the Syrian coast and its air attacks on parts of Idlib in the last few weeks—ostensibly against jihadist positions—testify to Moscow’s resolve.

Turkey has been working on several strategies to postpone the inevitable. It has been reinforcing its military presence at observation posts in Idlib to demonstrate its determination to prevent the fall of the enclave to Assad’s forces. Turkey is also trying to weed out Hayat Tahrir al-Sham (HTS), an offshoot of Al Qaeda and formerly known as the Al-Nusra Front. The HTS controls some 60 percent of the province, and Turkish forces are mobilizing Islamist and nationalist opposition factions in Idlib that resent HTS’s overwhelming presence. Ankara hopes to eliminate HTS to placate the Russians who consider it a terrorist organization and are bent on destroying it. The Turks are hoping that this will persuade the Russians not to revive their bombing campaign and stop the Syrian regime from attacking Idlib.

However, because of its strained relations with Washington and burgeoning arms and energy relationships with Moscow, Ankara is in no position to confront the Russians openly. Besides, the September 7 tripartite meeting in Tehran among Russia, Turkey, and Iran on Idlib failed to arrive at a consensus. This indicates that a full-scale assault on Idlib, while delayed by the Sochi accord, is likely a matter of time. At the Tehran meeting, Turkish president Recep Tayyip Erdoğan called for a cease-fire on all sides. However, Russian president Vladimir Putin declared that this would be pointless, as it would not include HTS and other groups that Russia considers terrorists. Iranian president Hassan Rouhani also insisted that the Syrian government must regain control over all its territory and that this was non-negotiable.

Therefore, the Sochi agreement is but a temporary reprieve. This pause seems to be based partly on Russia’s desire not to be held primarily responsible for the human catastrophe likely to follow a regime offensive in Idlib. But Russia’s influence over Assad and the IRGC and Iran-trained Shia militias allied with the regime is limited. This means a regime offensive against Idlib is likely to get underway sooner rather than later, and Moscow will have to fall in line once this happens. This is what transpired in Aleppo and eastern Ghouta where similar agreements were reached and then collapsed when Assad’s army, with the aid of Iranian forces and allied Shia militias, forcefully removed opposition combatants and their civilian supporters from these areas.   On the other side, the battle-hardened jihadists of HTS pushed to the wall by the Turkish campaign against them—a campaign required by the Sochi agreement—are unlikely to respect the terms of the accord and meekly give up their arms. They would rather fight than surrender and may even go on the offensive against Assad’s troops to embarrass Turkey and derail the Sochi accord. Their actions are, therefore, likely to provide the regime and its allies with the excuse to resume a full-scale assault on Idlib.

If this happens, as is likely, it will leave Ankara with two unpleasant options. The first is to fight the regime and its allies in support of the opposition forces while attempting to counter Russian air support for the offensive. This would leave Turkish-Russian relations in tatters at a time when Turkey’s ties to the United States are deeply strained as well. It would also be a massive undertaking since Turkey’s military capacity is severely hobbled because of significant purges among senior officers after the failed coup of July 2016. Also, a military adventure of such proportions is likely to erode Erdoğan's popularity at home once figures of Turkish casualties begin hitting the headlines in the international and domestic press.

Turkey’s alternative is to try to mend fences with the Assad regime to extricate itself from the Syrian quagmire. This would mean leaving the Turkish-backed Syrian rebel Free Syrian Army (FSA) factions to their fate and ignoring the human suffering in Idlib likely to follow a full-scale invasion. Also, it would not solve the refugee crisis, but Turkey could insist that in return for its withdrawal Russia and Iran pledge that displaced persons will be sheltered in “safe areas” close to Turkish borders but not allowed to enter Turkey.

Such a move could salvage Turkey’s relationship with Russia, which the standoff over Idlib threatens to unravel. In return, Russia and Iran could guarantee that they will not allow the Syrian Kurdish militia the People’s Protection Units (YPG) to expand the Kurdish enclave in Syria. In fact, such a deal may entail the YPG surrendering some of the territory it controls on the Turkish border to Assad’s military. The reduction of YPG-controlled territory and curbs on Kurdish ambitions will also serve Tehran’s interests as it is plagued by its own Kurdish conflict, which seems to be becoming more acute.

Recent columns published in the pro-government Turkish press indicate that Ankara is seriously considering this option. Well-known columnist Mehmet Barlas, a staunch Erdoğan supporter, wrote: “We have to contribute to the Assad regime’s efforts to reform the constitution and hold elections. . . . Turkey must avoid a face-off with Russia over Idlib. The way to do this is to pursue a line that supports Syria’s unity and the legitimacy of its administration.”

The United States should not prevent Turkey from cutting such a deal with Russia, Iran, and the Assad regime. This is because Washington is not in a position to help Turkey substantially in a military confrontation in Syria without getting involved in another major Middle Eastern war. Furthermore, Washington already seems to be moving toward conceding legitimacy to the Assad regime. Its early unequivocal rhetoric of 2012–13 insisting on Assad’s removal as a precondition for any settlement in Syria has given way to a grudging acceptance of Assad’s rule. As early as March 2017, Sean Spicer, the former White House press secretary, stated categorically, “With respect to Assad, there is a political reality that we have to accept.” Around the same time, former U.S. Secretary of State Rex Tillerson stated, “I think the . . . longer-term status of President Assad will be decided by the Syrian people.” Despite the Trump administration’s more recent belligerent rhetoric regarding the Assad regime, there is little evidence that Washington wants to remove Assad by force or to prevent the regime’s occupation of Idlib. For example, Washington reportedly sent a message to FSA leaders in June that stated, “You should not base your decisions on the assumption or expectation of a military intervention by us.”

In this context, a withdrawal from Syria by way of an arrangement with Russia and Iran that includes some face-saving gestures seems the better of Ankara’s options. It could look like a defeat for Erdoğan, but it may be the best outcome for Turkey given the current configuration of forces in and around Syria. Turkey’s withdrawal, if it happens, would also mark the end of its neo-Ottoman ambitions, which this author had warned against as far back as 2012. It would mean a return to a saner, conventional Kemalist policy of minimal involvement in the quicksand that is the Arab world. This may turn out to be a positive long-term outcome for Turkey.

A Turkish withdrawal as described above is likely to have only marginal effects on Ankara’s relationship with Washington. The United States itself is neither willing nor able to intervene militarily in Syria in any major way. It cannot, therefore, expect Turkey to do the dirty work since the negative implications of a military confrontation in Syria could be very severe for Turkey. Moreover, other vital issues are bedeviling U.S.-Turkish relations, such as American support for the YPG and Turkey’s purchase of Russian S-400 air defense systems. A Turkish withdrawal from Idlib is not likely to change the course of this already rocky relationship.