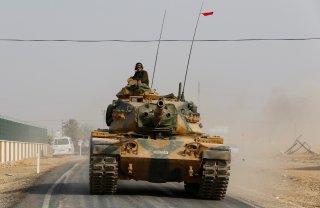 Turkish leader Recep Tayyip Erdogan informed the Turkish parliament on Wednesday that the country’s military would launch an operation against Kurdish fighters in two cities in northern Syria to establish a “30-kilometer security zone” along Turkey’s southern border to protect it against the spillover from Syria’s ongoing conflict.

Erdogan outlined the plan to Turkey’s lawmakers, claiming that Turkish forces would “clean up Tal Rifaat and Manbij of terrorists”—referring to two large cities in northern Syria adjacent to the Turkish border—before moving “step-by-step into other regions.”

Tal Rifaat and Manbij are both under the control of the Syrian Kurdish People’s Protection Units, or YPG. While several American and European countries have provided assistance to the YPG in recent years, largely due to the essential role it played in containing the advance of the Islamic State (ISIS) terrorist proto-state from 2014 through 2017, Turkey has classified it a terrorist group due to its ties to the Kurdistan Workers’ Party, or PKK, which has fought a violent insurgency in southeastern Turkey since the mid-1980s.

Although Turkey also opposes the government of Syrian president Bashar al-Assad, who has largely defeated the rebellion in southern Syria, it has primarily intervened in the conflict to weaken Kurdish groups. Ankara has accused the YPG of conducting attacks against Turkish security forces within Turkey, and Turkish forces have occupied land in northern Syria to function as a buffer zone against further attacks.

U.S. secretary of state Antony Blinken cautioned against the move, although he did not suggest that the United States would take any action against Turkey to prevent it. “It’s something we would oppose,” Blinken told a press conference alongside NATO Secretary General Jens Stoltenberg. “The concern that we have is that any new offensive would undermine regional stability [and] provide malign actors with opportunities to exploit instability.”

The Syrian Democratic Forces, an opposition coalition to which the YPG belongs, also warned that the Turkish operation would undermine the group’s efforts to fight against the remnants of ISIS, which lost all remaining territory within Syria by 2019 but has maintained an active insurgent campaign against Syrian-Kurdish forces.

“The SDF has been expecting a possible battle [with ISIS] for a while now,” SDF spokesman Farhad Shami told AFP in response to Erdogan’s comments. “In the event of an attack, we will pause our war against [ISIS] and start military measures against the Turkish invasion,” inhibiting the group’s ability to fight the terrorist threat.

Once launched, the new incursion would be the fourth such operation in northern Syria since 2016. During previous incursions, the Turkish government claimed that it was fighting both ISIS and the YPG, although the overwhelming majority of fighting was ultimately conducted against Kurdish forces.