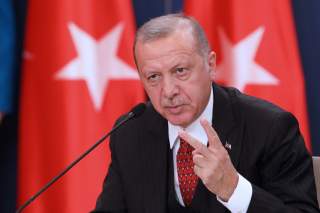 Turkey went to the recent NATO summit under a cloud of tensions. The U.S. Senate Foreign Relations Committee Chairman Jim Risch was preparing to support a bipartisan sanctions bill over Turkey’s acquisition of the S-400 missile defense system, and Ankara was feuding with France’s Emanuel Macron. Turkey had other ideas, it would browbeat the United States and France and other NATO powers by pushing back on a defense plan for Baltic states to wring concessions from NATO. It wants support for its recent October operation in northern Syria and for NATO to agree with Ankara that the Kurdish People’s Protection Units (YPG) are a terrorist group.

Ankara’s NATO goals were only one of a series of files Turkey was working on in early December. This is part of Turkey’s grand strategy that increasingly places the country astride the Middle East as a regional power as well as an emerging global power. This is not a usual place for Turkey to be, after years of exploring different foreign policies from “zero problems with our neighbors” to “neo-Ottomanism.” Along the way, Turkey has historically flirted with “pan-Turkism” and is portrayed as having “pan-Islamic” ambitions. Adding it all together: A muscular policy in the Mediterranean, Africa, Syria, Iraq, working with NATO, Russia and Iran at the time, outreach to Malaysia and Pakistan, as well an alliance with Qatar, relations with Hamas and soft power initiatives through media and the Red Crescent, Turkey is mapping out global ambitions. This isn’t just grand strategy but also real-world ramifications, for instance, Turkey’s attempts to seek out alleged “Gulenist” plotters abroad and extradite them. The path to this grand strategy has brought Ankara into conflicts and almost weekly disputes with countries in the Mediterranean, or Europe, Israel, Egypt, Saudi Arabia, India, China, Myanmar and the United States. Along the way, Turkey’s ruling party of Recep Tayyip Erdogan’s AKP has convinced itself that it is winning and that a mix of threats, military action and land grabs tend to result in adversaries climbing down. It’s not every day that a country can take on disputes with the United States, NATO, the European Union, UN and others and come away as confident and strong as Ankara appears. This is a strategy, not just a series of crises.

One recent instructive part of this strategy links the Mediterranean to disputes regionally and with NATO. Turkey had signed a deal with Libya’s embattled government in Tripoli on November 27 to demarcate an exclusive economic zone that is a political message that Turkey would not be sidelined from the eastern Mediterranean, according to Ankara. However, Greece, Cyprus and Egypt see it as a land-grab at sea. Libya is in the midst of a civil war that the government based in Tripoli is losing to forces of the Libyan National Army under Khalifa Haftar. The government doesn’t even control the land near where it negotiated the deal and the deal looks like a way for Ankara to exploit Tripoli’s need for support from Ankara. Greece expelled Libya’s ambassador on December 6 and Ankara condemned Athens.

As Turkey was trying to push NATO to support its Syrian operation, and signing deals with Libya, it also said it would remain in Syria until “terrorists” there are defeated, a potentially open-ended campaign that could keep Turkey in northern Syria for many years. Ankara wants to host a four-way summit with France, Germany and the UK to discuss its “safe zone development plan” to reconstruct areas Turkey took over in Syria in October. The UN Secretary-General came to Turkey and agreed to look into Ankara’s plan on November 1.

Turkey’s policies are evolving on numerous fronts but on all of them, it generally pursues similar steps of escalation and negotiation. Most of these policies have roots in historic Turkish interests that have merely expanded under the current government. For instance, Turkey always had an interest in keeping the Kurdistan Workers Party from entrenching in Syria or Iraq. In Syria, Turkey had achieved the Adana agreement through similar threats and negotiation in 1998, mediated with Egypt and Iran, such that it got Syria to close PKK offices. Turkey said in January 2019 that it had a right to enter Syria to attack the PKK. Ankara says the YPG is the Syrian branch of the PKK and accuses the United States of having worked with the YPG to create the Syrian Democratic Forces in 2015. The difference between 1998 and 2019 is that Turkey didn’t accept the United States’ “security mechanism” that was on the table since earlier this year, and got President Donald Trump to withdraw U.S. forces from the border.

Additionally, Turkey has had forces in northern Iraq since the 1990s seeking to hunt down PKK members and bases. However, it has expanded its presence through an operation dubbed “Claw” this year. It claimed to have killed 255 “terrorists” by July and launched a third portion of the operation in August. Turkey has also expanded airstrikes in Iraq to attack areas in Sinjar, the region that ISIS once committed genocide against Yazidis. Turkey claims local Yazidis joined PKK affiliates and carried out airstrikes in April 2017, August 2018 and November 2019. Turkey also carried out airstrikes near a refugee camp in Makhmour in December 2018. Only sixty kilometers from the Kurdistan Regional Government capital of Erbil, Turkey has pressured the KRG to clamp down on camp residents and alleged PKK members. There are questions now about how much Turkey’s presence will expand in northern Iraq and if it will become permanent.

Ankara’s role in northern Iraq is achievable due to its relations with the KRG. These relations, strained after a Kurdish referendum in September 2017 in northern Iraq, nevertheless hinge on economic and other ties. In November, the KRG’s prime minister went to Turkey to meet with Turkish officials.

In Syria, Turkey’s military role is conducted through agreements with Russia. It initially moved into an area near Jarabulus in operation Euphrates Shield to stop the SDF advance in August 2016 near Manbij. Then, after an understanding with Russia, it attacked the YPG in Afrin in January 2018, causing large numbers of Kurds to flee. Ankara set up twelve observation points in Idlib, eventually brokering a ceasefire deal with Russia in September 2018 to avoid a Syrian regime offensive against Turkish-backed Syrian rebels and extremist groups in Idlib. Turkey also helped transform the Syrian rebel and opposition groups into the Turkish-backed Syrian National Army on October 9, just days before Erdogan’s phone call with Trump got the United States to withdraw. The SNA has been controversial for its role in Turkey’s operation near Tel Abyad that was launched on October 9. Called “ill-disciplined” by the United States and accused of “ethnic cleansing,” more important for Turkey is that it can use former Syrian rebels to fight the YPG and achieve a ceasefire with Russia to allow Turkey to remain in northern Syria.

Turkey’s military role in Syria and Iraq is increasing and unprecedented in the region. While other countries, such as Israel, conduct operations in disputed territories, and other countries are involved in military campaigns in neighboring states, such as Saudi Arabia in Yemen, Turkey’s expansive role in Syria and Iraq is now far beyond anything it did in the past, since the end of the Ottoman Empire. It has exploited weak neighboring states and agreements with Russia and the United States to conduct its operations. It has also relied on relations with Iran to do so. Iran supports the Assad regime in Damascus and is close to the Iraqi government in Baghdad. Turkey’s main agenda in both Iraq and Syria is to destroy the PKK or groups it considers linked to the PKK. This is an outgrowth of the 2015 breakdown in the ceasefire with the PKK and the ruling AKP party’s attempt at home to reduce the role of the People’s Democratic Party (HDP). Ankara has removed numerous HDP mayors, accusing them of “terrorism” and jailed HDP politicians.

While the conflicts in Iraq and Syria are primarily border conflicts extending around forty kilometers into the countries, with airstrikes going up to two hundred kilometers, Turkey’s role increasingly runs into its relations with Russia, Iran and NATO countries. On the Russian front, Turkey shot down a Russian warplane in 2015 and the Russian ambassador to Turkey was assassinated in 2016 in Ankara. However, since 2017, when Turkey and Russia agreed to the S-400 deal, the countries have become increasingly close. This involves not only military deals but also the TurkStream pipeline that goes to Turkey and also eastern Europe from Russia. Moscow has hosted the Astana Syrian peace process with Turkey and Iran and through that Moscow and Ankara appear to be seeing eye-to-eye more on Syria.

Turkey went to the London NATO summit demanding that the alliance recognize the YPG as a terrorist threat to Turkey that is linked to the PKK. Turkey presented no evidence of YPG attacks on Turkey, but it said that its approval of a NATO Baltics defense plan was dependent on the YPG issue. Turkey’s Foreign Minister Mevlut Cavasoglu said on December 6 that Turkey did not concede anything in London, even though it appears it did not get the YPG “terrorist” label it wanted. Ankara claims that threats to its borders are a threat to NATO and in the past it got NATO’s Secretary-General Jens Stoltenberg to pay lip service to Ankara’s security concerns and ask only that Ankara show restraint. He defended Turkey’s role in Syria in mid-October.