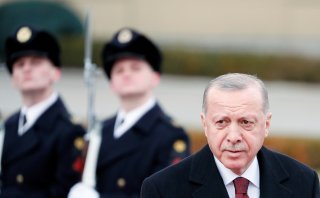 Forget George W. Bush’s “axis of evil.” The Turkish foreign ministry has identified a new “alliance of evil,” comprising the unlikely combination of France, Greece, Cyprus, Egypt, and the United Arab Emirates. What the five countries have in common is that they issued a joint denunciation on May 11 of Turkey’s “violations of international law,” including shipments of weapons to Libya in defiance of a UN arms embargo and drilling in Cypriot territorial waters. The temperature of Ankara’s rhetoric and the diversity of its targets both underscore how isolated Turkey has become thanks to President Recep Tayyip Erdogan’s adventures in Libya and the Eastern Mediterranean.

Ankara’s growing military footprint in Libya is Erdogan’s effort to compensate for his failure to establish Muslim Brotherhood-affiliated governments in Syria and elsewhere in the Middle East and North Africa. Since December 2019, Erdogan has provided military support to western Libya’s internationally recognized Government of National Accord (GNA) based in Tripoli. Libya is critical to Erdogan because it provides him an opportunity to put pressure on Egypt, Saudi Arabia, and the United Arab Emirates, with which Turkey is locked in a fierce battle for geopolitical influence across the region. The battlefield also offers Erdogan a chance to flex his neo-Ottomanist ideology—Libya holds an important place in the hearts of the late empire’s admirers, who see Italy’s 1912 conquest of the territory as a stinging defeat, and the present conflict as an opportunity avenge the perceived injustice.

The key role Libya plays in Erdogan’s regional strategy makes the GNA and its prime minister, Fayez al-Sarraj, ever more crucial for the Turkish president. The GNA’s main adversary is the self-styled Libyan National Army (LNA) of Gen. Khalifa Haftar, which is supported by Egypt, Russia, Saudi Arabia, and the UAE, and unofficially by France, and came close to capturing Tripoli in April 2019. Haftar’s battlefield gains prompted the GNA to seek military assistance from Turkey in December, resulting in a flood of Turkish material and advisors to the country. Later, the Turkish parliament even approved a one year mandate for military deployment to Libya.

Since January 2020, at least four major cargo ships transporting military equipment from Turkey to the GNA docked in Tripoli and Misrata. There are reportedly at least one hundred Turkish military personnel and eighty-six Turkish-made and Qatari-funded Bayraktar TB2 drones operating in Libya, which Ankara exports in violation of the UN embargo. In addition, Turkey has airlifted at least four thousand Syrian fighters to Libya to aid the GNA, pulled from Ankara’s various Sunni militant proxies. These proxies reportedly also include child soldiers as young as fourteen.

The tide of war has turned with Erdogan’s intervention, with the frontline of the conflict moving south, away from the capital. GNA forces have reestablished control between Tripoli and the Tunisian border to the west, captured al-Watiya airbase on May 18, and continue to push their way forward to Haftar’s stronghold in Tarhuna, which he used to besiege the capital. The LNA’s May 21 threat to unleash the “largest aerial campaign in Libyan history” and declaration of all Turkish positions as “legitimate targets” will not suffice to reverse its fortunes.

While Erdogan supports the GNA for ideological and geopolitical reasons, there is also an economic element. Tapping into hydrocarbon resources in Libya and the eastern Mediterranean is central to Ankara’s thinking about the region. In January 2019, Cyprus, Egypt, Greece, Israel, Italy, Jordan, and the Palestinian Authority established the Eastern Mediterranean Gas Forum in Cairo. France requested to join the forum as well and the United States applied to become a permanent observer. As Turkey’s ambitions and actions leave it further isolated, Erdogan has come to see the GNA as a key ally in thwarting this growing partnership that aims to contain his maximalist maritime ambitions.

To that end, Turkey signed a maritime boundary agreement with the GNA in November 2019 with the goal of creating a sea corridor between the two countries that stretched from southwest Turkey to northeast Libya, cutting through a zone claimed by Greece and Egypt. Moreover, Turkey has ambitions to play a key economic role in post-pandemic Libya, with the head of the Turkey-Libya Business Council predicting that Turkey can increase the market share of its products in the war-torn country from its current level of 13 percent to 30 percent.

On paper, Turkey’s support for the UN-recognized government of Libya should not raise eyebrows. But though it receives the UN’s backing, the GNA—four years after its birth—is still just a loose coalition of various militia factions, and has not expanded its territorial control beyond pockets in western Libya. Moreover, there are reports of jihadists serving among the ranks of pro-GNA militia and concerns that extremists could gain access to Libya’s oil wealth.

Despite Turkish successes on the battlefield, Ankara still has a very long way to go if it wants to completely defeat the LNA, with the front lines being far away from Haftar’s headquarters in Libya’s east.

Turkey’s support for the GNA and Sarraj is matched by the support the UAE and Egypt have provided to the LNA and Haftar, viewing the rogue general as a bulwark against the spread of political Islam in Libya—even though ultra-conservative Madkhali Salafists form an important contingent within the LNA. The UAE’s aid to Haftar has only expanded since his Tripoli campaign began, and both Abu Dhabi and Cairo have violated the UN arms embargo. Abu Dhabi has carried out over 850 airstrikes for Haftar and is also thought to have sent over one hundred deliveries of weapons by air between mid-January and mid-March alone, amounting to nearly five thousand metric tons.

Most recently, UAE-based companies were implicated in sending eastern Libya nearly eleven thousand tons of jet fuel, in further violation of the embargo. Additionally, the UAE is reported to have sent thousands of Sudanese men to fight in Libya. And while the UAE may be Haftar’s most committed backer, the septuagenarian warlord is also supported by Saudi Arabia, Jordan, and even Russia, which, according to a new UN report, has sent between eight hundred to twelve hundred mercenaries from its infamous Wagner group to the war-torn country.

With such an influx of foreign powers, the war of words was bound to heat up alongside the military conflict. On April 30, the UAE slammed Turkey’s designs on Libya by expressing its “categorical rejection of the Turkish military intervention” in Arab affairs. Turkey responded by accusing the UAE of “providing putschists in Libya with weapons, military equipment and mercenaries.” On May 12, Turkey’s Foreign Minister Mevlut Cavusoglu doubled down by blaming the UAE and Egypt for “trying to destabilize the whole region.” Cavusoglu’s barbs against the UAE, in particular, were pointed, with the minister claiming, “If you are asking who is destabilizing this region, who is bringing chaos, then we would say Abu Dhabi without any hesitation.”

The military conflict between Libya’s warring factions, and their respective patrons, is as much about the control of Libya and its resources as it is about the future of the Middle East and North Africa and the potential role the Muslim Brotherhood may play there. Given that the bitter hostility is not just about ideology, but also about the political survival of the governments and leaders involved, there does not seem to be a quick resolution to the Libyan civil war or any sustainable cessation to the armed conflict even during the coronavirus pandemic. Libya’s European neighbors across the Mediterranean, who have for the most part chosen to take a backseat in the country’s civil war, might want to brace for impact for yet another wave of humanitarian fallout and refugees resulting from the country’s protracted conflict.

Aykan Erdemir is a former member of the Turkish parliament and senior director of the Turkey Program at the Foundation for Defense of Democracies (FDD), where Varsha Koduvayur is a senior research analyst focusing on the Gulf and Philip Kowalski is a research associate focusing on Turkey.