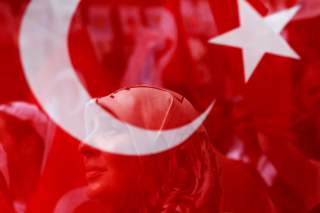 Sectarian violence has spread across the Middle East, with Sunni and Shiite populations engulfed by the blood-letting. But to make matters worse, the Sunni world has recently cleaved into two competing axes pitting a new Turkish-Qatari alliance against a bloc led by Saudi Arabia and the United Arab Emirates (UAE). Across the region, from Iraq to Libya, these opposing Sunni factions are now contesting each other’s influence, adding another layer of complexity to an already volatile region. As these axes now seek to project their power and influence while diminishing that of their rivals, the stability of the region could become collateral damage in this battle for primacy.

Turkey’s cross-border operation into northeast Syria in October 2019 is the latest example of how these bitter rivalries play out. Qatar was one of the few actors, alongside Hamas and Pakistan, that supported the internationally condemned campaign. Similarly, when Saudi Arabia, Bahrain, Egypt and the UAE severed diplomatic ties with Qatar, enacting a land, sea, and air blockade in June 2017, Turkey offered a lifeline, sending cargo planes with food and other goods. While both Turkey and Qatar are ostensibly U.S. allies and host key American bases, they are now working in tandem to promote a destabilizing Islamist agenda across the Middle East.

As we show in our recent report, “Brothers in Arms: The Consolidation of the Turkey-Qatar Axis,” Turkish-Qatari diplomatic relations picked up steam after Turkish strongman Recep Tayyip Erdogan’s Islamist-rooted Justice and Development Party (AKP) came to power in 2002. Turkey’s humanitarian assistance at the onset of the 2017 blockade was just the most visible sign of a strategic convergence that had been brewing for years, shaped by a shared affinity for Islamism that influences their regional engagement.

Islamism, particularly the ideology of the Muslim Brotherhood, is the heart of the Turkish-Qatari axis. Erdogan’s AKP has a long history with the Brotherhood, openly embracing the group after consolidating his rule within Turkey. Within Qatar, the Brotherhood has no room to operate, but Doha energetically promotes the organization’s ideology and interests abroad. Together, Turkey and Qatar have become permissive jurisdictions for a whole host of Islamist groups, prompting the U.S. Treasury to sanction Turkey- and Qatar-based individuals and entities for aiding and abetting Hamas, the Islamic State, and Al Qaeda among others.

The list of welcomed and sheltered Islamists includes luminaries such as Yusuf al-Qaradawi, an exiled Muslim Brotherhood cleric who encouraged suicide attacks against American service members in Iraq; Khaled Meshaal, leader of Hamas, the Palestinian branch of the Muslim Brotherhood; Saleh al-Arouri, commander of Hamas’ military wing, who planned the kidnapping and murder of three Israeli teenagers in 2014;  and Wagdy Abd El Hamied Mohamed Ghoneim, an extremist preacher who dubbed the campaign against the Islamic State a “crusader” operation.

Turkey and Qatar have also provided tag-team safe havens to terror financiers, often in glaring violation of U.S. and UN sanctions. When one country comes under pressure to expel someone, the other takes them in, a pattern seen repeatedly. When Meshal, a long-time resident of Doha, was briefly forced to leave Qatar in 2012, he made his way to Turkey. Meshal went back to Qatar in 2015 and was spotted at prayers next to Qaradawi in 2017. When Turkey came under pressure for hosting Arouri after he had been living there for five years, he relocated to Qatar.

Harith al-Dhari, a notorious funder of Al Qaeda in Iraq (AQI), and his son, Muthanna, provide yet more examples of this willful pattern. In fact, former Emir Hamad bin Khalifa Al Thani met with al-Dhari just one month after Washington designated him as a sponsor of AQI, in 2008. When Qatar inaugurated its Grand Mosque in 2011, al-Dhari was welcomed as an honored guest. He died in Turkey in 2015. Hamad, who had by then abdicated in favor of his son Tamim, traveled to Jordan to relay his condolences to Harith’s son Muthanna, and was even videotaped exchanging hugs and kisses with the latter.  Muthanna is under a UN travel ban, but that did not stop Qatar from letting him into the country, including for in-studio appearances on Al-Jazeera to rail against the U.S.-led coalition fighting the Islamic State. The head of Turkey’s Directorate of Religious Affairs, meanwhile, hosted Muthanna in Ankara in 2017.

The Turkish-Qatari partnership is growing across a wide array of fields, including defense cooperation, military ties, media, energy, and banking. Turkey set up a military base in Qatar in 2015, providing the tiny emirate of some three-hundred-thousand-odd citizens a vital deterrent against a bloc led by Saudi Arabia and the UAE. Qatar, meanwhile, rushed to Turkey’s aid when the lira suffered a crisis in August 2018; Doha provided an aid package that included a mix of economic projects, currency deposits, and investments, plus a $3 billion currency swap to shore up the lira (which Qatar then boosted to $5 billion last month.)

What makes the destabilizing Islamist agenda of Turkey-Qatar alliance so worrisome for Washington is that both countries are, independently, allies of the United States—at least on paper. Both host important U.S. overseas bases. Turkey, a member of NATO, hosts the Incirlik airbase that is home to American nuclear weapons and a U.S. Air Force command. Qatar hosts U.S. Central Command’s forward headquarters at Al Udeid airbase.

But Turkey and Qatar have become brothers in arms, pursuing joint ventures in illicit finance, supporting Islamism, and promoting extremist ideologies. Washington needs to develop a multipronged response that involves its transatlantic allies and regional partners to compel Ankara and Doha to curb their malign conduct. Options include conditioning future high-level dialogue with Qatar on concrete and verifiable steps taken on terror finance; exploring basing alternatives to U.S. facilities in Turkey and Qatar; and continuing to sanction Turkey- and Qatar-based individuals and entities involved in terror and illicit finance.

If Ankara and Doha abandon their adversarial policies, then Washington should welcome them back into its fold and be prepared to offer inducements, including defense projects that involve joint production with, and technology transfer to, Turkey and Qatar. But the greatest benefit Ankara and Doha would reap by changing their malign policies would be shedding their global image as permissive jurisdictions for illicit and terrorism finance, which would ameliorate their investment climate and help remedy their public diplomacy deficit.

The fundamental question for Turkey and Qatar is whether their leaders are more committed to a destabilizing Islamist vision than they are to the security and well-being of their own citizens. For Washington, the question is how long it can maintain an alliance with governments that provide sanctuary to extremist ideologies and terror financiers.

Aykan Erdemir is a former member of the Turkish parliament and the senior director of the Turkey Program at the Foundation for Defense of Democracies, where Varsha Koduvayur is a senior research analyst. Follow them on Twitter @aykan_erdemir & @varshakoduvayur