Two Million Infected? Iran Is Failing To Contain The Coronavirus. 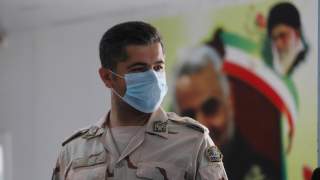 The deadly COVID-19 coronavirus outbreak has wreaked havoc throughout Iran, another disaster that highlights the Islamic Republic’s mismanagement and raises further questions about its legitimacy.

Iranian authorities claim 7,161 cases of COVID-19, ranking fourth behind China, South Korea and Italy. Yet the Islamic Republic has completely botched its response to the coronavirus, which has claimed the lives of a number of high ranking officials and lawmakers.

The regime’s dealing with the virus is similar to how it handles other crises—deny the news; blame foreign enemies, especially the United States; admit there’s a problem and then suppress the news.

Today, even as the contagion threatens to overwhelm the country’s health system, Tehran blames the sanctions and warns of being a victim of an American biological attack. The commander of the Islamic Revolutionary Guards, Gen. Hossein Salami, recently said the virus is part of a biological attack from the Great Satan.

As for dealing with the problem, officials contradict each other while the television broadcasts programs on how special prayers offer protection not only against coronavirus but also against cholera.

The coronavirus has taken at least 237 lives, according to government figures, although unofficial numbers from hospitals and doctors suggest a much greater death toll. “Crisis is not a word to describe it. Current conditions are war-like” said an official from Iran’s University of Gilan’s faculty of medical sciences. In videos released on social media, medical staff have complained of being silenced so as not to contradict official reports.

Just weeks ago, Iranian officials bragged about exporting face masks to China and offering messages of support to Wuhan, the epicenter of the virus. While many countries suspended flights to China, Iran was one of the few countries that didn't suspend incoming flights.

Yet, Tehran knew about the impact of the virus in early February. Supreme Leader Ali Khamenei curbed his physical contact with visitors, no longer allowing anyone to kiss his hand. The authorities faced a dilemma: the regime needed huge turnouts to commemorate the anniversary of the Islamic Revolution on February 11 and to take part in the parliamentary elections on February 21.

As news of the virus circulated by mid-February, the government said the United States had hyped the coronavirus to suppress turnout for the sham parliamentary elections, which was being boycotted by all opposition groups. The authorities didn’t want a low turnout.

Moreover, officials refused to quarantine Qom, on the pretext that “quarantine is a primitive method of dealing with the spread of diseases.” The shrine of Fatemeh Masoumeh typically draws millions of pilgrims and Islamic Republic authorities have refused to close it to worshippers, helping the virus spread throughout the country.

Iranian officials have a tendency of blaming U.S. sanctions for their own ineptitude and mismanagement. Yet, just last month, Foreign Ministry spokesman Abbas Mousavi said a Swiss humanitarian channel was not necessary as “medicine and foodstuffs were never subject to sanctions in the first place.” Despite the economic pains, the budget for religious institutions and the IRGC keeps growing. This increased budget for these unelected institutions translates into reduced services for ordinary people.

The Islamic Republic’s problem is not just its sheer incompetence and endemic corruption but its lack of legitimacy. Last November, the regime shut down the Internet as it cracked down on nationwide protests. The security forces killed more than 1,500 people, according to Reuters. The government has yet to release an official death toll, leading many to suspect that the real figure is much higher. In January, the Revolutionary Guards shot down a Ukrainian Airlines plane, killing all the 176 people aboard but denied any responsibility for three days. Tehran was forced to admit its role after outside pressure. Rather than show remorse, officials have threatened the families of the victims and warned them against speaking to diaspora media outlets.

Now, ordinary Iranians who are distrustful of official outlets are resorting to social media to spread the news of the coronavirus. As some reports suggest the number of infected could reach as many as 2 million, the arrival of Iranian New Year on March 21, is unlikely to bring much joy.