Two Senators Have a Solution for Deterring Iran 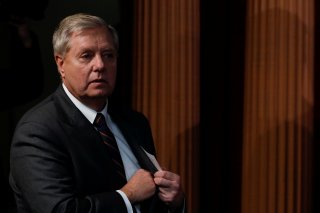 New developments make it imperative for Europe to understand that the Iranian nuclear deal, also known as the Joint Comprehensive Plan of Action (JCPOA) has been an Iranian con-job designed to advance, not derail, the mullahs’ nuclear weapons program. As part of this con, Iran has sought to persuade the West, especially the United States, to end economic sanctions in return for promises of Iranian good behavior.

What then are the new dangerous developments that make it imperative to find a new nuclear deal and jettison the JCPOA now?

Second, the European partners in the JCPOA have given Iran unlimited time to come back into compliance with the nuclear agreement, despite massive, deliberate and dangerous Iranian violations of existing JCPOA terms. In short, the three European partners to the JCPOA (Britain, France, Germany) have simply caved to Iranian blackmail that will give Iran more time to continue to build a nuclear weapons arsenal.

And the IAEA, which issues quarterly updates on Iran’s atomic program, issued an unprecedented separate March 3 report noting Iran’s “lack of cooperation and failure to provide access” to three critical nuclear sites while stockpiling an estimated one ton of enriched uranium sufficient to make one nuclear warhead, say analysts. One diplomat described the report as an unmistakable message from the IAEA to Iran: “There is a new sheriff in town.”

Fourth, Iran is now working to produce military equipment inside Syria, Yemen and Lebanon, a capability that significantly reduces the cost and time required to transport weapons overland from Iran. This Iranian strategy, unless challenged, adds to Iran’s already robust missile and weapons threats, and could dramatically increase Iran’s military influence in the region along with that of their terror proxies.

Fifth, the United Nations arms embargo on Iran expires in October 2020. With Iran’s already formidable missile inventory and rocket technology, the prospect of no limits on arms that Iran can acquire makes it virtually inevitable that Tehran will create even more terrorist mayhem. Worse yet, once the embargo ends, China and Russia are lined up to sell weapons to Iran, including more advanced missiles.

To counter these dangers, two American senators and members of the Senate Foreign Relations Committee—Lindsey Graham (R-S.C.) and Bob Menendez of (D-N.J.)—have introduced legislation in the Senate to completely eliminate the JCPOA. They would replace it with a new nuclear agreement.

Both senators were encouraged by the Trump administration to seek such a new agreement, especially if it is in parallel to Secretary of State Mike Pompeo’s comprehensive plan for deterring Iran and changing the Iranian regime's behavior. Both senators also discussed the new legislation with European leaders at a recent Munich security conference.

The key element of the new deal the senators propose is that it would prohibit all uranium enrichment not only by Iran but also by other Middle East countries, hopefully putting a lid on regional nuclear weapons proliferation that has worried proliferation experts. The proposed deal would also guarantee a supply of nuclear fuel for all of Iran’s nuclear reactors and those in other Middle East countries that have been built to generate electricity.

Graham noted that in addition to banning all enrichment by Iran—opposite to the JCPOA guarantee of an Iranian enrichment capability—Iran’s missile capability would be significantly curtailed by expanding elements of the current UN arms embargo. Also envisioned is a complementary agreement that Graham explained would be designed to end Iran’s support of terrorism and the proxy wars in Yemen, Syria and Lebanon. The ban would also apply to Iran’s support of Hezbollah, Hamas and Islamic Jihad.

Graham’s legislation highlights the growing realization by senators that Iran never gave up its original nuclear weapons work, hid its nuclear weapons work from the IAEA, and serially violated the JCPOA as part of Iran’s goal to export its totalitarian version of an Islamic revolution.

Thus, concluded Graham, the Euro III has every incentive to end the existing nuclear agreement with Iran, replace it with a new deal, and only then curtail the American and UN economic sanctions against Iran. After all, it is European cities that Iran would soon be targeting with nuclear-armed missiles, not just those in the Middle East.

Some analysts pushed back against Graham’s move. They explained Europe’s reluctance to confront Iran about its nuclear ambitions was due to the very-real Iranian threat to disrupt Middle East oil supplies on which Europe heavily depends. But, Graham countered, the current JCPOA foolishly allows Iran’s already growing military power to add nuclear weaponry. That would give Iran not less but even more leverage over the Europeans as they could be even more easily coerced into accepting Iranian political and economic demands.

What are the chances the senators’ proposed deal might become a reality? The prospects are good. The plan appeals to a wide spectrum of senators because it does not simply prohibit Iran from enriching uranium. It also addresses wider Middle East proliferation challenges beyond Iran that have been of considerable concern to Congress. Similarly, it should appeal to a number of nations in the UN that are weary of silently enduring Iran’s continuous aggression. And most importantly, Graham’s plan puts an end to Iran’s nuclear program before relief from economic sanctions can be considered.

In summary, there are many positive attributes of the deal the two senators propose, including support from both political parties in the Senate and the Trump administration.

All this might transform Graham’s proposal from a “nice idea” into a “real deal.”

Peter Huessy is president and CEO of GeoStrategic Analysis, a national security firm he founded in 1981.