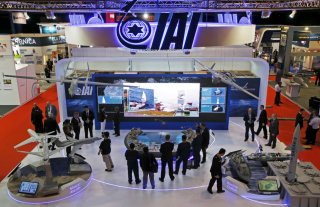 Israeli and Emirati defense firms have negotiated a strategic agreement to design an unmanned water vehicle able to engage in anti-submarine warfare.

The deal was inked in Dubai between Tel Aviv’s Israel Aerospace Industries (IAI) and Abu Dhabi’s EDGE defense conglomerate on Thursday, on the sidelines of the ongoing Dubai Airshow. It provided for the design of the “170 M” vessel, which could be used for both military and civilian purposes.

The announcement of the partnership comes nearly eight months after a March 2021 announcement by IAI that it would cooperate with EDGE to construct a drone defense system.

Following the August 2020 Abraham Accords which normalized relations between Israel and the United Arab Emirates (UAE), the two nations have emerged as close political and military partners. They have also cooperated closely with the United States, which under the administration of President Donald Trump agreed to sell the F-35 fighter jet to the UAE.

Faisal al-Bannai, CEO of EDGE, praised the cooperation agreement, describing it as a “defining moment” for the company.

“As EDGE invests extensively in autonomous capabilities,” al-Bannai wrote, “our co-development of a Counter-UAS will help strengthen our advanced technology portfolio.”

IAI President Boaz Levy also approved of the agreement, calling it a “stepping stone for further business and strategic alliances” between the two countries.

Once complete, the Israeli-Emirati drone would be able to operate autonomously if needed, and could independently carry out missions related to anti-submarine warfare. It could also be used for reconnaissance and surveillance, as a launchpad for certain types of aircraft, and could be reconfigured for oil and gas exploration for civilian use.

The two companies did not indicate when the drone would enter production, nor how much each side had invested in the project.

The Abraham Accords were ultimately also joined by Bahrain, Sudan, and Morocco, all of which normalized diplomatic relations with Israel for the first time in 2020. Sudan’s participation was noteworthy, as its capital, Khartoum, gave its name to the “Khartoum Resolution,” a document in which the Arab League indicated it would never recognize Israel, make peace with it, or participate in negotiations with it. In exchange for participation in the agreement, the Trump administration removed Sudan from the U.S. State Sponsors of Terror list and recognized Moroccan sovereignty over the disputed Western Sahara region.