The UAE-Israel Deal Is About More Than Iran 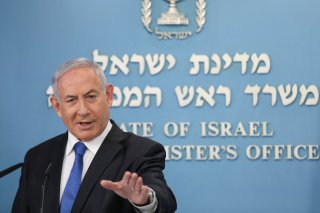 In short, GCC elites are increasingly unwilling to expend the opportunity costs involved in forswearing closer ties with Israel, but portraying the shift as a strategic necessity to confront an expansionist Iran is the most convenient explanation to offer their own populations and the world. When Netanyahu travels abroad, rather than having to discuss the rights of Palestinians, he usually manages to dominate the meeting with threat inflation regarding Iran and the question of what military concessions Western countries can provide to fill the seemingly bottomless pit that is the professed security angst of this nuclear-armed regime.

The Saudi and Emirati governments likewise benefit from the same strategy as exemplified by historically large arms sales to Saudi Arabia during both the Obama and Trump eras. Any card that causes Samantha Power, who is most known for her award-winning book on the genocide in Darfur, to enthusiastically defend a military alliance that includes Janjaweed child soldiers, during her time as UN ambassador, is certainly an effective one.

Threats and Opportunities for Iran

The UAE’s security relations with Israel have been ongoing for years. There is no clear explanation as to why making them public would result in those ties becoming deeper or more fruitful. The world has moved past the need for physical embassies to facilitate security arrangements and it's entirely likely that Israel and the UAE already have covert strategic coordination offices in each other’s countries. Proper communication is difficult for countries like Iran and the US, not so much for the lack of physical embassy facilities, but because their enmity renders any communication controversial and any agreement exposed to tired Munich or Turkmanchai comparisons.

To be clear, this is not entirely negative for Iran. Iranian officials have for some time considered the potential strategic upsides of the Israeli-GCC embrace becoming more public. Iran never intended to be the flag holder of the Shia world in a region subsumed by sectarian tensions. It strived to, since the revolution, play a leadership role in the Muslim world more broadly. During the last 20 years, Iran’s brand has been marginalized among Sunni Arab populations to the benefit of the Persian Gulf area Sheikhdoms. Iranian officials believe a public embrace of Israel by the GCC, juxtaposed against the dedication of Iran to the Palestinian cause, may show Iran as principled and GCC leaders as a band of curroptable, treasonous and ultimately untrustworthy princlings.

There are, however, some serious concerns for Iran. The two most serious concerns being that a more robust UAE-Israeli security cooperation can bolster the various anti-Assad forces they’ve each backed over time. And, more worryingly for Tehran, the UAE could allow Israel to use it as a base from which to launch air operations against Iran. These are both serious concerns but making Israeli-UAE ties more public does not in itself enhance these threats. Additionally, the UAE seems to have reversed course on trying to oust Assad from Damascus and its mentioned updated threat perception pertaining to Iran does not lend itself to making its territory available for Israeli aggression across the Persian Gulf.

Iran should be concerned about the deepening security relationships among its rivals but if Israel and the UAE wish to intertwine their regional objectives across the region, they will have to do so more publicly that will certainly enhance Iranian opportunities to enforce audience costs on Abu Dhabi.