Unfolding Trauma: For Palestinians, the 1948 Nakba Continues to Today 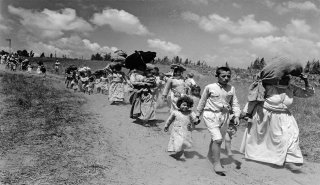 Yet, there is a momentum and episodic nature to these events that seem inevitable. And the Nakba is the context! Israelis know nothing about how Palestinians perceive it and continue to live the trauma of being uprooted and expelled. Israelis do not recognize that the violence against Palestinians is not just physical. It exists in the state itself, in its systems and structures and policies. It cannot be attributed to lone individuals who might be held to account but is hidden within the social, political, and economic systems that govern. Numerous policies and more than sixty discriminatory laws target Palestinian citizens of Israel and deprive them of all manner of rights while giving advantages to Jews. This structural violence is worse and its impact is more long-lasting than the physical assaults on Palestinians and their property.

Today, the people in the streets are fed up. Their revolt is the direct result of untreated trauma. They are acting on their own, revolting against the colonizer without any party or organizational support in the belief that resistance is the path to recognition, to the liberation of their lands, and the affirmation of their humanity. If only psychologically, the resistance has been effective, if perhaps short-lived, substitute for decades of lived impotence vis-à-vis their colonized reality. It enables Palestinians to feel less inferior and perhaps sometimes even on equal footing with their colonizers and makes them more capable of facing defeat or continued violence and subordination.

The trauma of the Nakba cannot be addressed until the rest of the world, and particularly Israel, recognizes its validity and importance. Jews and Palestinians are two peoples marked by definitive historical traumas that define their worldviews. The Jewish and Israeli narratives reached an epiphany of redemption in the 1948 founding and subsequent flourishing of the state of Israel. But for permanently dispossessed Palestinians living in exile or under occupation, the 1948 Nakba is not a completed historical memory. The trauma endures and continues to unfold in the daily, lived experience of most Palestinians. Global refusal to admit the arrogant genocidal impetus behind the founding of Israel is an enduring and ever-growing wound for which all the governments involved are culpable and complicit. Failure to recognize and address the deep and enduring impact of the Nakba and the founding of Israel prevents understanding of the Palestinian perspective. Recognizing and dealing with the consequences of the Nakba—including the displacement of most Palestinians from their ancestral lands and their ongoing statelessness—is the key to any solution, any amelioration, and the only way for Jews and Arabs, and the whole world, to finally move on.

Until we come to grips with the political and cultural legacy of the Nakba, calm, stability, and normality will elude Israel.

Carol Daniel-Kasbari, Ph.D., is an Adjunct Professor at George Mason University’s Carter School for Peace and Conflict Resolution, and a Non-Resident scholar with MEI's Program on Palestine and Palestinian-Israeli Affairs.