Unlikely Victory: How Israel and Lebanon Settled Their Maritime Borders 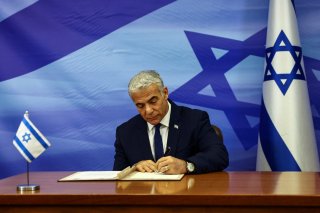 Last week, Israel and Lebanon, two countries that officially designate each other as enemy states, signed an agreement settling a long-standing maritime border dispute. While definitely not as important as Israel’s peace treaties with Egypt or Jordan or the Abraham Accords, which normalized Israeli’s ties with the UAE, Bahrain, and Morocco, this latest agreement reduces tensions in the region and provides an opportunity for Lebanon to break out of its economic collapse and political mayhem.

In order to make sense of the agreement, it is important to differentiate between two types of maritime zones as far as international law is concerned.

The first category covers territorial-sovereign waters, which stretch from the coast to the 12-mile mark. States have the same level of sovereignty over these types of waters as they do on land.

The second category is exclusive economic zones (EEZ), which begin 12 nautical miles from a country’s coastline and extend up to 200 miles away from the coast (unless an EEZ encounters that of another country).

The concept of economic waters developed in international maritime law as a group of principles for states to divide exploration rights and benefit from resources found in or under the waters, such as fishing zones, energy resources, and minerals.

Until the first decade of this century, no urgency was felt by the eastern Mediterranean states to mark out their EEZs. However, discoveries of large natural gas fields under the waters of Israel, Egypt, and Cyprus, and most likely in Lebanon, made matters more pressing.

In 2007, Israel unilaterally marked out, with floats, its territorial maritime border with Lebanon, based on its understanding of international maritime law. Lebanon, for its part, declared its own wish list on maritime borders, which consisted of its maximalist positions.

Later, in 2010, Israel and Cyprus, which also discovered a very large natural gas field in its waters, reached an agreement to demarcate their EEZs. Similarly, Cyprus and Lebanon reached their own agreement earlier in 2007 (though Lebanon has yet to ratify it).

These hasty diplomatic developments were a direct result of the understanding that hiding under the waters of the eastern Mediterranean are significant hydrocarbon resources, and that to fully benefit from them it is necessary to settle border issues.

After Cyprus and Israel, on the one hand, and Cyprus and Lebanon, on the other, settled their maritime borders, the one unresolved dispute left open in this Mediterranean triangle was the border between Israel and Lebanon. Over the last twelve years, the two countries engaged in indirect negotiations led by the United States.

For over a decade, Israel and Lebanon were unable to reach an agreement on this boundary. What made it possible now? The answer to this question seems to involve three critical elements falling in place at the right time.

The first involves the preliminary testing that has occurred in recent years north of the now-established boundary, revealing a significant gas field, mostly on the Lebanese side. While Lebanon made no headway in developing its gas resources, Israel made dramatic progress, building offshore platforms and benefiting from multiple fields within its EEZ.

Secondly, Lebanon’s economy is in complete shambles and the country’s political paralysis prevents the formation of a government capable of providing for the basic needs of its citizens. Blackouts are the norm rather than the exception, there is a chronic shortage of basic products such as food and oil, and the banking system is dysfunctional. These ills are joined by the destructive role played by Hezbollah, the Iran-backed terror organization.

It is no wonder, therefore, that Lebanon is eager to begin exploiting the natural resources it hopes lie waiting for it under the sea. This would be a game changer for both Lebanon’s economy and its volatile internal and regional political situation.

Thirdly, the Biden administration appointed a new energy envoy to the region, Amos Hochstein, who invested significant efforts into kickstarting talks. He earned the trust of both the Lebanese and Israeli sides and was able to break a ten-year freeze, conducting shuttle diplomacy between Beirut, Jerusalem, and Washington.

Hochstein created an American compromise formula, which on the one hand followed the Israeli position regarding sovereign waters and answered its security needs, but on the other hand relies on the Lebanese position regarding EEZs, thus making it possible for Beirut to make progress and hopefully produce and profit from its field, dubbed Qanna.

From a security perspective, Israel gained what it desired: The demarcation of a border with Lebanon that recognizes Israel’s territorial-sovereign waters.

From an economic perspective, the deal is consistent with Lebanon’s desire to gain possession of the waters up to a boundary known as Line 23.

Additionally, Israel will be compensated, if and when natural gas is produced from the mostly Lebanese field, a field where the existence of commercial-scale gas reserves has yet to be verified. The scope and terms of this compensation have yet to be negotiated between Israel and Total, the French company that has the exploration rights for the Lebanese gas field.

Within Israel, challenges to the deal from the political Right were rejected by the Israeli Supreme Court and the signing took place as planned.

The current agreement is not a peace treaty—far from it. Hezbollah will continue to threaten regional stability. However, not wanting to be perceived as being the force that quashed hope for a better economic future for the Lebanese people, Hezbollah leader Hassan Nasrallah declared that he would honor any agreement reached by Lebanon.

Ultimately, settling the maritime boundaries is a win-win for both Jerusalem and Beirut. Israel reduced the threat to a major economic asset (the Karish natural gas field) and signed a bilateral agreement with an enemy state—a diplomatic achievement in its own right. Lebanon can act on the hope of dramatically improving the fate of its people. A stable Lebanon is in the best interest of Israel too.

The increased role of the United States and France in the Lebanese arena is also a positive development and is preferable to leaving Lebanon under the sole grip of Hezbollah and Iran, which led that country to misery. And who knows, now that the precedent of a maritime border agreement has been set and the ice has been broken, perhaps there is increased potential for a future agreement on the land border between Israel and Lebanon. That, however, still seems far away.

Amb. Arthur Koll (Ret.) is a publishing expert with The MirYam Institute. He is the former Deputy Director-General of the Israeli Ministry of Foreign Affairs.