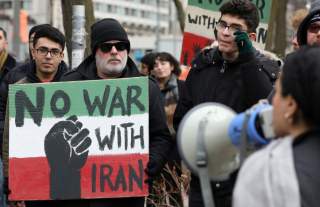 In all the din, first about an impending war between the United States and Iran and then over the relief that a direct conflict has been avoided. It seems most analysts have lost sight of the impact of the latest crisis on weak and unstable regional states caught in the crossfire between Washington and Tehran. Iraq is the most prominent among them. The near-war between Iran and the United States has threatened the fragile political consensus that has kept the country from disintegrating.

The U.S. drone attack that killed Maj. Gen. Qassim Suleimani and sparked a crisis in Iraqi territory was in violation of the agreement between the United States and Iraq regarding the deployment of American forces in Iraq. Additionally, it appeared that the attack did not have the blessing of the Iraqis, whose leaders quickly gathered together and voted to oust the U.S. troops from the country. Also, the drone strike not only violated Iraqi sovereignty but it killed a leading Iraqi military figure too. Abu Mahdi al-Muhandis, who died in the strike, was the deputy head of Iraq’s Popular Mobilization Forces (PMF) and commander of Kata'ib Hezbollah, a leading Shia militia formation, which is an important component of the PMF.

The deadly drone strike had four immediately visible consequences. First, it has heightened anti-American feelings in the Iraqi populace, especially among the majority Shia, which has led to the Iraqi parliament passing a resolution demanding the expulsion of all foreign forces from Iraqi soil. This has set off a crisis in U.S.-Iraqi relations, with President Donald Trump threatening to impose sanctions on Iraq if it demanded the removal of the five thousand American soldiers currently in the country.

Second, it brought to an abrupt end the demonstrations calling for the expulsion of Iranian influence and presence in Iraq, especially in the predominantly Shia parts of the country. Suleimani was hugely popular among the Iraqi Shia because of his role in leading the fight against ISIS. His death immediately set off a sympathy wave that turned the tide of popular opinion in favor of Iran.

Third, the wave of anti-Americanism that led to the parliamentary resolution calling for the expulsion of U.S. forces also clearly depicted the fissure within the Iraqi polity between the Kurds and the Shia Arab majority. The Kurdish representatives boycotted the parliamentary session that passed the resolution as most Kurds consider an American military presence essential to safeguard their autonomy in the north and to continue the fight against the ISIS. Moreover, the Kurds have little sympathy for Iran, which has been engaged in suppressing its own Kurdish population. The reopening of the Arab-Kurdish divide on this issue can have far-reaching consequences for the territorial integrity of Iraq.

Fourth, the projected removal of American forces and the killing of Suleimani, the two bulwarks against the revival of ISIS, will likely embolden ISIS sleeping cells, some of which are already active in Iraq, to increase their terrorist attacks in the country and emerge once again as a threat to its population. Since the United States considers ISIS a major security threat, the revival of ISIS fortunes in Iraq can be highly deleterious for long-term American interests in the region and beyond.

Since 2003, Iraq had become the principal arena in which the American-Iranian rivalry was played out. This had contributed significantly to the insecurities and instabilities plaguing Iraq. The blatant use by the United States of Iraqi territory for the slaying of one of Iran’s top generals is bound to heighten the American-Iranian battle for influence in the Middle East. As a result, Iraq is likely to become further destabilized. Iraq is a fragile state and has remained so since the American invasion of 2003, which demolished its state structure and spawned sectarian conflict on an unprecedented scale. In the aftermath, there was an escalation of American-Iranian rivalry in Iraq, and that has increased following Suleimani’s assassination, which has also accentuated the Kurdish-Arab divide in the country and is highly likely to add to its fragility, once again opening up the possibility of its eventual descent into a failed state. Iraq is the centerpiece of the regional order that was created at the end of World War I. Its unraveling will be bound to affect Syria and Lebanon and could lead to an unstoppable domino effect that would change the map of the Middle East.

Mohammed Ayoob is University Distinguished Professor Emeritus of International Relations, Michigan State University, and a senior fellow for the Center for Global Policy. His books include The Many Faces of Political Islam and, most recently, Will the Middle East Implodeand editor of Assessing the War on Terror.