Uprising Averted: Iran Completely Shut Down the Internet Within Its Own Borders. 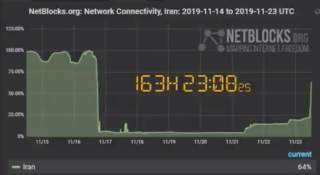 All of which leaves the United States and its international partners with a pressing question: are they equally invested in ensuring that the medium the Iranian opposition has come to rely upon remains accessible and resilient in the face of regime pressure? The answer could very well determine the future success of any effort to bring down the Islamic Republic.

Ilan Berman is senior vice president of the American Foreign Policy Council in Washington, DC. This piece is the sixth in a series of articles exploring the beliefs, ideas and values of different factions within the Iranian opposition, as well as the challenges confronting them.

The first installment, covering the agenda of former Crown Prince Reza Pahlavi and his supporters, can be found here. The second, outlining the worldview of the Mujahideen e-Khalq, appears here. The third, examining the activism of Masih Alinejad and the broader Iranian anti-hijab movement, is located here. The fourth, detailing the efforts of activists like Mariam Memarsadeghi and Tavaana to promote democracy within Iran, is accessible here. The fifth, introducing the “Council of 14” group of human rights activists and campaigners, as well as their international backers, appears here.