U.S.-Led Coalition Blocks Russia in Syria While Allowing Turkey to Terrorize the Kurds 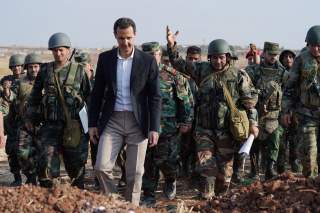 The Trump administration is using firepower to block Iran and Russia from coming up from the south while ignoring the pleas of the Kurds to stop a Turkish invasion from the north.

The Pentagon is using a well-known two-steps-to-the-right tactic to avoid becoming immersed in regional chaos. It is observing acts of war while not preventing them from happening in order to appease an ally that has more political clout than another partner—and a stockpile of U.S. nuclear weapons in its backyard. In fact, an official at the U.S.-led counter-ISIS coalition recently reiterated to the National Interest that “no U.S. forces will participate in operations related to the implementation of the ‘safe zone.’”

But this tactic may create problems than military officials initially expected.

“We hold the Pentagon responsible for all the crimes committed by Turkey if they don’t close the airspace,” Syrian Kurdish executive president Ilham Ahmed claimed at a press conference in Washington. “It doesn’t require any military commitment.”

Ahmed’s argument is based on the fact that the U.S. government is notified of all Turkish and Russian movements through the region under a “deconfliction” agreement between the various militaries operating in northeast Syria, so it is aware of when Turkey is preparing to launch an attack. To date, the U.S. military has not been willing to stop Turkish airstrikes against the Syrian Democratic Forces (SDF). And coalition officials say there have been confirmed sightings of U.S. forces near the Syrian-Turkish border. These officials told the National Interest that their movements were part of a deployment to the oil-rich region of Deir ez-Zor.

War hawks in the Trump administration have been obsessed with countering America’s adversaries, Iran and Russia, in Syria. They continue to cling to their long-floated plan to peel off Arab elements of the SDF in Deir ez-Zor, which would basically sabotage President Donald Trump’s attempts to remove U.S. troops from Syria.

Now that Trump is interested in securing the “oil region” around Deir ez-Zor, armored units are pouring into Syria. The number of troops that are being sent to protect that oil supply may surpass the number of troops that were in the country when Trump announced his “withdrawal” plan on October 6, essentially turning his 2016 campaign promise into the popular “one step forward, two steps back” dance that is so popular at Washington’s strategic planning parties.

In fact, some of these troops were caught on camera driving down the M4 highway, close to an active warzone where Turkish forces and Syrian rebels are clashing with the SDF, Russia, and the Syrian government. Others were sighted near the Syrian-Turkish border to the east of the combat areas.

“Coalition troops transit the M4 highway and other routes as it withdraws troops from northern Syria and repositions some troops to the Deir ez Zor region,” explained U.S. Air Force Staff Sgt. Zachary A. Boyer, a spokesman for the anti-ISIS coalition. “All Coalition military operations are de-conflicted with other forces operating in the region.”

The forces are supposedly in Deir ez-Zor to protect the oil fields from ISIS and bolster the SDF. But the Bradley armored vehicles rolling through the Syrian desert instead seem to pose more of a deterrent to Syrian president Bashar al-Assad, and his Russian and Iranian allies.

“[The Americans] have the will to stay, but we don’t have an answer on how long, in what manner, and why yet,” Ahmed said at the press conference. “The American presence should be conditioned to impose stability and security in the region.”

“The U.S. deploying heavy armored vehicles such as Bradleys to Deir ez-Zor means one thing: that it wants to have the firepower to hold off Russian, Iranian or Assad forces that might try to cross the Euphrates to take the oil fields. That’s what they're for,” said Center for a New American Security fellow Nicholas Heras, who has observed SDF operations in northeast Syria and serves as an occasional advisor to U.S. counterterrorism officials.

“Clearly their intentions are to keep [the oil fields] from falling into the hands of the Syrian government and Russia,” said former Ambassador Robert Ford. “We have less international legitimacy holding the oil fields. It seems to be a clear violation of international law.”

The Rojava Information Center, a collective of journalists based in northeast Syria, and Deirezzor24 both reported that coalition aircraft bombed pro-Assad forces in the eastern countryside of Deir ez-Zor on October 29. But a coalition spokesman says that no such military action has occurred.

“The Coalition did not conduct airstrikes in Syria in recent days,” the spokesman told the National Interest. “The Coalition de-conflicts military operations with other forces operating in Syria through pre-existing communication channels and interlocutors.”

“The type of operations that ISIS is trying to plan in Deir ez-Zor doesn’t require heavy armored vehicles to thwart,” Heras said. “ISIS has not tried to take hold or maintain control of ground in Deir ez-Zor because essentially the coalition owns the air and ISIS understands the consequences that would have for its network there.”

But in the north of the country, U.S. airpower has not prevented Turkey from launching numerous attacks on the SDF, which it began doing after Trump announced on October 6 that Turkey would “soon be moving forward with its long-planned operation into Northern Syria.”

Nearly two weeks after Trump’s announcement, Vice President Mike Pence brokered a stopgap cease-fire deal, which quickly collapsed. Soon after, Russia announced its own “safe zone” agreement with Turkey. Still, the fighting raged on. Turkish-backed rebels clashed heavily with pro-Assad forces who had gone to secure the border, and Russia postponed its patrols along the border as Turkish president Recep Tayyip Erdoğan declared his intent to “expand the safe zone.”

To alleviate pressure on the Kurds, Assad’s defense ministry has offered amnesty to the SDF fighters who joined his army on October 30. SDF leader Gen. Mazloum “Kobani” Abdi denounced “the invitation to engage as individuals” but demanded “the preservation of the SDF’s individuality.” The next day, Assad softened his tone.

“The situation will not return as before. There are facts on the ground which need to be addressed, and this will take time,” he told a Syrian television station. “There are armed groups; we do not expect them to hand over their weapons immediately.”