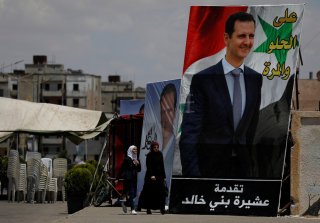 Normalization with Syrian leader Bashar al-Assad is emblematic of the new approach Turkish president Recep Tayyip Erdogan, once a sworn enemy of the Syrian regime, has taken. Last month Erdogan expressed his willingness again to meet with Assad during a multilateral summit in Uzbekistan.

The fact that Turkey, once a leading advocate for regime change in Syria, is now sending clear signals about its readiness to reconcile with Damascus after similar gestures from the United Arab Emirates (UAE) should lead the United States to consider a new policy toward Syria.

The United States should lift some sanctions to improve the lives of the Syrian people in return for ensuring Assad’s cooperation in eliminating Iranian influence in Syria. For the United States, allowing regional countries to normalize with Assad without being part of the new reality complicates its position in Syria, where the U.S. troops are periodically attacked by Iran-linked militias, regular run-ins with Russian military patrols occur, and Turkish incursions threaten to destabilize areas controlled by the Syrian Democratic Forces (SDF).

It’s been eight years since the United States first intervened in Syria and while the American public is hardly paying attention, the threat to U.S. troops will grow if a more realistic policy is not put forward.

No one despises Assad more than I do, having spent more than forty days of my youth in one of his prisons during the early days of the revolution. Nevertheless, even I admit that eleven years is long enough to use the same methods to change the reality in Syria. The time has come to abandon the idea of regime change, especially since Syrian opposition groups are overwhelmingly comprised of jihadists, so the country can be stabilized and Iranian influence in Syria eliminated once and for all.

The process of normalization with Assad is happening without Washington’s approval but allowing regional countries to craft a new strategy toward Syria without having a say in it is not in the United States’ interest.

Turkey’s primary objective in normalizing relations is to build a coalition with Damascus, Moscow, and Tehran to prevent the Kurdish-led Syrian Democratic Forces (SDF) from taking control of one-third of the country.

To achieve this goal, Turkey may be forced to make compromises with Iran and Russia which would make U.S. foes the biggest winners.

The SDF, on the other hand, is trying to revive its relations with Iran by allowing Iranian-linked militias to advance in eastern and northern Syria to thwart a potential alliance between Turkey and Iran.

The United States should reconcile its interests with these realities to prevent its forces from being attacked by Russian or Iranian fighters, and push Damascus to take steps that would improve the lives of the Syrian people.

Now is the best time to work with Gulf states and use the prospect of sanctions relief as leverage to prevent Iran from imposing its own conditions on Damascus. It will be too late for the United States to harvest any political gains from the sanctions if it re-enters the nuclear agreement with Iran that will pour billions of dollars into Iranian banks and enable Tehran to use economic aid to maintain its grip on Damascus.

According to an August New York Times report, the Syrian government asked Iran not to attack Israel from its territory. However, Damascus, weakened by war and sanctions, does not have the economic or military means to control its territory and oust Iran.

The prospect of a nuclear-armed Iran is a nightmare that has driven a new era of Arab-Israeli cooperation and a begrudging openness to deal with Assad after a decade of isolation.

To the Sunni Arab states, Assad symbolizes the worst kind of tyrannical anti-Sunni despot. However, the priority for Arab Gulf countries and Israel is that Assad’s partial victory does not play in favor of Iran.

Western countries like Greece and Cyprus can open channels for dialogue to motivate Assad to agree to compromises, such as the release of secular Sunni dissidents, establishing a timeline for the withdrawal of the Islamic Revolutionary Guard Corps (IRGC) and Hezbollah from Syria, and reconciling with the Kurds.

Assad can use gestures from Greece and Cyprus to show his supporters that the West is moving toward a genuine rapprochement, as the previous eleven years of the war have eliminated all trust between Damascus and the West.

Yes, Assad is a dictator and a killer, as well as a self-proclaimed enemy of America and its allies. But he will remain in power until someone in Syria decides to get rid of him. Until then, we do not have the luxury of hopes and dreams, while other key players in the Middle East are adopting new strategies toward Syria.

The Syrian people need stability and to live in their homeland with dignity, not as refugees. This will finally allow the country and the region to get back on track.

Hadeel Oueis is a writer and journalist focusing on the Middle East and a research fellow at the Philos Project.