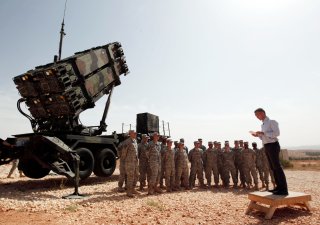 U.S. officials indicated on Tuesday that American troops had been involved in the defense of the United Arab Emirates (UAE) against a Houthi missile attack earlier in the week.

On Monday, as the UAE hosted Israeli president Isaac Herzog in his first visit to the country, Emirati missile batteries intercepted and destroyed a long-range rocket launched from Yemen. The attack marked the third time that Abu Dhabi, the UAE’s capital, had been targeted by rockets in the past two weeks. While two of the three missiles were shot down, one hit its target, a fuel depot, and killed three civilians.

While the United States has not formally acknowledged a role in stopping Monday’s missile attack, White House press secretary Jen Psaki announced on Monday that U.S. forces were using “Patriot interceptor [missiles] to … [support] efforts by the armed forces of the UAE.”

In the hours after the missile shootdown, the Pentagon confirmed that Patriot defensive systems had been active during the strike, but said that the UAE’s own air defense system had shot down the incoming missile.

The United States’ role in defending the UAE from a Houthi missile attack raises questions about the extent of America’s involvement in the war in Yemen, which President Joe Biden announced he would withdraw from in February 2021. However, while the White House publicly withdrew from “offensive” operations within Yemen itself, it has continued to aid the Saudi-led military coalition in defensive measures.

In practice, this commitment means that the United States continues to mount air defense operations in Saudi Arabia and the UAE, but does not directly support Saudi and Emirati reprisal strikes against the Houthis within Yemen. The coalition’s strikes have led to a significant number of Yemeni civilian deaths and the destruction of key physical infrastructure within the country. Amnesty International has raised concerns that some of the weapons used in these strikes were manufactured by the United States, raising further questions about the degree of de facto U.S. involvement in the war.

The United States also stations roughly 2,000 U.S. troops in the UAE, as well as the necessary facilities to launch drones and advanced F-35 fighters.

In a Monday meeting with Qatari Emir Sheikh Tamim bin Hamad Al-Thani, Biden used the United States’ involvement in the UAE’s defense as an example of the benefits of partnering with the United States, arguing that “America will have the backs of our friends in the region.”