U.S. to Provide ‘Livelihood Support’ to the Lebanese Military 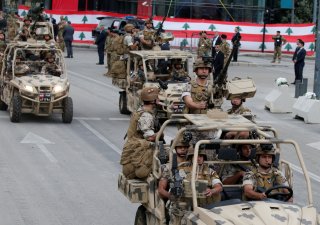 As part of its aid package for Lebanon, the U.S. Department of State announced on Monday that it had agreed to provide $67 million in aid to the Lebanese Armed Forces. Most notably, the aid package will include “livelihood support” payments rather than standard military equipment transfers.

State Department spokesman Ned Price briefly described the payments on Monday, stating that they would be used to help the Lebanese military “respond to a wide range of security, economic, and public health challenges facing the country.”

“We want to ensure that the Lebanese Armed Forces is able to carry out its duties and functions,” Price added, outlining the military’s responsibility to defend Lebanon from foreign and domestic threats and to preserve the country’s stability amidst its unprecedented political and economic challenges.

Price noted in his remarks that previous rounds of funding to the Lebanese military—totaling $2.5 billion over the past fifteen years—had helped it defeat Al-Qaeda and Islamic State branches operating in Lebanon and strengthen its authority along Lebanon’s border with Syria. The military was also tasked with responding to the COVID-19 pandemic, and it played a key role in responding to the August 2020 Beirut port blast that destroyed much of the city’s downtown area.

Much of the United States’ earlier assistance came in the form of lethal aid, including new weapons and equipment, rather than general funding to assist in other areas. However, due to Lebanon’s ongoing financial crisis and the significant devaluation of the Lebanese pound, the country’s army is nearly bankrupt. Lebanon has accepted food donations from Qatar and has resorted to offering helicopter rides to tourists in order to pay for their maintenance. The average low-level soldier’s wage has decreased to the equivalent of less than $100 per month, leading to extremely high desertion rates.

Given Lebanon’s financial situation, observers have suggested that U.S. aid would be far better spent in the form of direct cash transfers. To some extent, these programs have already been used; throughout 2021, the State Department granted the Lebanese military $59 million in discretionary spending to be used toward securing the Syrian border.

Price did not specify how much would be set aside for the livelihood support payments, suggesting that the exact figure would be decided in Congress. He underlined, however, that Lebanon’s stability depended on the continued cohesion of the military, and an influx of cash could help to restore morale and ensure unity, strengthening the country at a crucial moment.