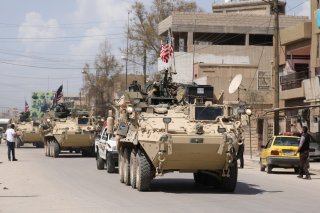 NBC News reported that the U.S. military responded with strikes from Apache attack helicopters, killing two or three militants and destroying three vehicles and pieces of equipment that were used to launch several of the rockets.

“We have a total spectrum of capability to mitigate threats across the region, and we have every confidence in our ability to protect our troops and Coalition partners from attacks,” he continued.

A senior Pentagon official on Wednesday asserted that the United States would continue to work to defend its servicemembers and interests in the region.

“We’re not going to hesitate to defend ourselves,” Colin Kahl, the undersecretary of defense for policy, told reporters, per CNN.

“We're not going to tolerate attacks by Iran-backed forces on our forces anywhere in the world, to include in Syria, and we won't hesitate to protect ourselves and take additional measures as appropriate,” he added.

On Tuesday, the U.S. military conducted airstrikes in Deir ez-Zor, Syria, that targeted infrastructure deemed to be used by groups with ties to Iran’s Islamic Revolutionary Guard Corps.

The airstrikes, ordered by President Joe Biden and carried out by F-15 and F-16 fighters, came a little over a week after several rockets struck near a military base in northeastern Syria that was housing U.S. troops. Multiple drones were also repelled in an attack near the At-Tanf base in southern Syria. The attacks did not result in any damage or injuries.

“These precision strikes are intended to defend and protect US forces from attacks like the ones on August 15 against U.S. personnel by Iran-backed groups,” Col. Joe Buccino, a spokesman for CENTCOM, said in a statement.

The president “gave the direction for these strikes pursuant to his Article II authority to protect and defend U.S. personnel by disrupting or deterring attacks by Iran-backed groups,” the statement continued.

The United States currently maintains roughly 900 troops in Syria, mostly split between the At-Tanf base and the country’s eastern oil fields.