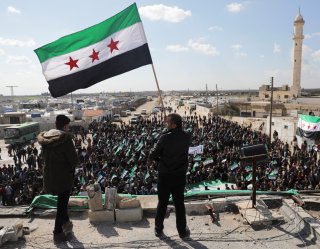 The U.S. State Department came under fire for allegedly endangering religious freedom in Syria at a recent hearing of the U.S. Commission on International Religious Freedom.

The Commission, created by Congress to advise the U.S. government, has held up the U.S.-backed, Kurdish-led territory in northeast Syria as a bastion of pluralism in war-torn Syria.

Witnesses at the Commission’s latest hearing on Wednesday accused the Trump administration of sowing chaos and endangering religious minorities by allowing Turkey to wage war on the Kurdish-led forces in northeast Syria.

Michael Rubin, resident scholar at the American Enterprise Institute, who had served as a Pentagon advisor during the 2003 invasion of Iraq, had the harshest criticism.

“Rather than stand up for religious liberty, the Trump administration treated it with disdain,” he testified. “The abandonment of Syrian Kurds came after a nearly yearlong internal campaign by U.S. Special Envoy James Jeffrey, a former U.S. ambassador to Turkey, who has long carried Turkey’s cause both inside government and out.”

Rubin pointed to a statement Jeffrey made in December 2018, several months after Turkish forces invaded the Syrian Kurdish enclave of Afrin.

“We want to have cooperation with Turkey across the board on all Syrian issues,” Jeffrey had said, referring to the U.S. relationship with the Kurds as temporary and tactical.

Rubin claimed that Jeffrey’s comments “appear to have convinced Turkish political and military leaders that there would be no consequence” to attacking the Syrian Kurds once again.

Turkey attacked Syria in October 2019 after U.S. president Donald Trump ordered a small U.S. peacekeeping force away from the border.

Hassan Hassan, director for non-state actors and geopolitics at the Center for Global Policy, claimed that the withdrawal announcement caused “chaos” and “confusion,” opening space for the resurgence of ISIS while forcing the Kurds to turn towards Russia.

The State Department pushed back against the allegations that it had facilitated Turkey’s inclusion.

“Ambassador Jeffrey has long been consistent and very clear that the United States strongly opposed any military operation by Turkey into northeast Syria,” a spokesperson told the National Interest. “This was conveyed to Turkey both publicly and privately on numerous occasions.”

The spokesperson pointed towards Jeffrey’s negotiations for a “safe zone” that would prevent a Turkish incursion, as well as the Trump administration’s efforts to secure a ceasefire in October.

“It was long-standing U.S. policy that our opposition to such an operation would be made through non-military means,” the spokesperson claimed, adding that the phrase “temporary and tactical” reflected U.S. policy “well before Ambassador Jeffrey assumed his current role.”

Charles Lister, director of the countering terrorism and extremism program at the Middle East Institute, told the National Interest that it was understandable to prioritize the U.S. alliance with Turkey over the relationship with Syria’s Kurds.

“It’s a long-established truth in diplomacy that strategic relationships with nation states will always take precedence over ties to non-state actors, no matter how friendly or challenged those strategic relationships might be,” he said. “We’ve got a long list of complaints to lodge at Ankara’s door, there’s no doubt about that, but we can’t just shut our eyes and ignore Turkey’s significance in the heart of the Middle East.”

Lister pointed to recent events in northwest Syria and in Libya, where Turkey has stepped in to halt Russian-backed military offensives.

“To use public testimony as a platform to accuse a veteran U.S. diplomat widely lauded across partisan lines for his commitment to American diplomacy of doing another country’s bidding in America is needlessly provocative and just not accurate,” he added.