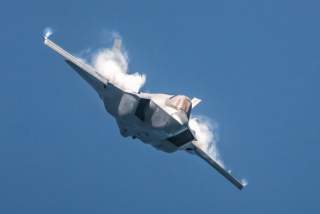 But Deptula is wrong. History time and again has proved it. Air power, no matter how sophisticated, alone cannot effect regime change. Bombing Iran would lead to disaster.

“With proper application, the effects of lethal force based on modern aerospace power, supplemented by offensive cyber operations, could result in the collapse of Iran’s economy, negation of their military, denuding of their nuclear programs and choking of their regional influence,” Deptula wrote at Breaking Defense, where he is a board member.

“Iran’s critical oil-refining capacity, oil-distribution network and power grid can all be rendered ineffective by these means in short order without any U.S. boots on the ground in Iran,” he added.

No ground troops would be necessary in Deptula’s imaginary decisive air war on Iran. “The flawed strategies applied over the last 19 years in Afghanistan and Iraq are not the answer to waging war with Iran,” he asserted. “Those strategies involved deploying hundreds of thousands of ground forces in the region to conduct prolonged occupation, nation-building and counterinsurgency operations—none of which would be applicable to Iran.”

Air-power advocates for decades have made similar promises. Apologists promised that bombers alone would defeat Nazi Germany, force North Vietnam to sue for peace and neatly end a brutal regime in Libya. They were wrong each time. And Deptula is wrong, irresponsible even, to promise the same thing in Iran.

Consider what Stephen Biddle from the New York City-based Council on Foreign Relations wrote about the U.S.-led air war on Libya in 2011. “The problem remains that warfare rarely allows big payoffs from small investments.”

But this unwillingness to commit undermines real leverage. Locals with existential stakes often prove more stubborn than distant Americans expect, and even high-tech firepower has serious limitations against low-tech but determined enemies who control the people on the ground through close-up violence.

Nor could air power even merely disarm Iran, rendering it incapable of striking back against America and its allies. During the 1991 Gulf War, U.S. military leaders vowed to hunt from the air and destroy Iraq’s main long-range weapons, its Scud missile launchers.

The effort was heroic.

None of it mattered. A post-war investigation revealed that U.S. and allied forces destroyed no mobile Scud launchers. Iraq in 1991 possessed between 400 and 1,000 ballistic missiles. Now recall that Iran in 2020 possesses tens of thousands of rockets and disperses them across a country that’s three times bigger than Iraq is.

No one really knows what would happen if the United States tried bombing Iran into submission. But it’s foolish to assume the results would be good for anyone.

Ask David Frum, a speechwriter for former U.S. president George W. Bush. “Inside the Bush administration, we thought we were ready to remake Iraq for the better—but we were not,” Frum wrote.

“We were ignorant, arrogant and unprepared, and we unleashed human suffering that did no good for anyone: not for Americans, not for Iraqis, not for the region. Almost two decades later, the damage to America’s standing in the world from the Iraq War has still not been repaired, let alone that war’s economic and human costs to the United States and the Middle East.”

A war with Iran would be worse. “The idea of repeating such a war, only on a much bigger scale, without allies, without justification, and without any plan at all for what comes next staggers and terrifies the imagination,” Frum wrote.