U.S.-Turkey Relations in a Time of Turmoil 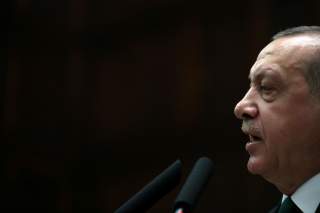 President Recep Tayyip Erdogan’s “control over the state apparatus is so complete now, he probably decides what kind of toilet paper gets bought in the universities” quipped Henri Barkey, an adjunct senior fellow for Middle East studies at the Council on Foreign Relations and the Bernard L. and Bertha F. Cohen Chair in International Relations at Lehigh University. This set the theme for a recent panel on U.S.-Turkey relations at the Center for the National Interest that shed light on a country which, under the increasingly autocratic grip of Erdogan, is beset by internal problems and external challenges. Barkey has experienced Erdogan’s authoritarian streak firsthand. As his co-panelist Steven A. Cook, Eni Enrico Mattei Senior Fellow for Middle East and Africa Studies at the Council on Foreign Relations, reminded the audience, Barkey was accused by Turkey of being a conspirator in the failed July 2016 coup attempt. In reality, Barkey was attending an academic conference on Iran, but the unjustified accusation testifies to the depths of Erdogan’s paranoia.

The discussion, which took place on October 4, was moderated by Geoffrey Kemp, senior director for Regional Security Programs at the Center for the National Interest. Much of the conversation centered on the domestic and international behavior of Erdogan because as Barkey observed, “Turkey has been transformed into a one man populist authoritarian regime.” He emphasized that in the aftermath of the failed coup, Erdogan has consolidated his control over all of the key institutions of Turkish state and society: the parliament, the judiciary, the military, and the educational system. Press freedom has evaporated; Turkey now jails more journalists than any other country, outstripping China and Egypt.

Barkey noted that “the biggest and most important challenge facing Erdogan is the economy.” Turkey confronts a serious economic downturn with inflation hovering around 25 percent, and even the most optimistic economic forecasts predicting a 3 percent GDP contraction in 2019. He said that Erdogan may not fully grasp the depths of Turkey’s economic predicament as he has “surrounded himself with acolytes and yes men.” For example, Berat Albayrak, Erodgan’s relatively inexperienced son-in-law, was recently appointed finance minister.

Steven Cook noted that Erdogan plays to domestic perceptions of Turkey as a “great power in its own right” citing his recent remarks at the UN General Assembly that the “world is bigger than five” (the five members of the UN Security Council). In this regard, Erdogan has sought to position Turkey as a major regional player, but results have thus far been mixed. Major challenges include Assad’s impending victory in Syria, Turkey’s push for European Union membership grinding to a halt, and increasingly strained relations with the United States. Nevertheless, Cook acknowledged that Erdogan’s omnidirectional approach to foreign policy has yielded some gains, not the least of which is a “working relationship” with Russia, which was something Ankara and Moscow never enjoyed during the Cold War. Furthermore, Europe is reticent to put excessive pressure on Ankara for fear of precipitating an economic implosion (European banks hold the majority of Turkey’s debt).

Cook questioned the conventional wisdom in Washington that the U.S.-Turkey relationship “needs to be rescued,” observing that Turkey’s strategic utility to the United States is “theoretical” at this point. While personal friction between Presidents Donald Trump and Recep Tayyip Erdogan has snarled relations, Cook attributed the U.S.-Turkey rift primarily to structural factors stemming from divergent interests and values. Despite enmity towards Assad, Turkey has been frustrated by U.S. support for the Kurdish YPG in Syria. The YPG is closely linked to the PKK, a group that has been locked in a decades-long struggle with the Turkish state for greater Kurdish autonomy, and which Ankara views as a terrorist organization, and its “mortal enemy.” Turkey’s talks with Russia over purchasing the S-400 missile system have unnerved its NATO allies, including the United States. Washington is also frustrated over the role that Turkish financial institutions have played in helping Iran circumvent sanctions. Finally, per Cook, the United States shares concerns with Israel and its Arab allies over perceived Turkish support for extremism in Gaza and elsewhere in the region.

The panel also discussed how the United States and Turkey have been at odds over the fate of two religious leaders: U.S. Pastor Andrew Brunson who was arrested and detained by Turkish authorities, and self-exiled cleric Fethullah Gulen, who lives in Pennsylvania, but whom Erdogan blames for the failed coup attempt in 2016. This summer, an ostensible deal between Trump and Erdogan to secure Brunson’s release fell through. Trump responded by imposing sanctions and doubling tariffs on metal imports, worsening an already bleak economic picture in Turkey. Also, on October 12 a Turkish court made a ruling releasing Brunson from prison. Both panelists predicted that Turkish officials would use such a ruling to tout the “independence” of the judiciary, when most Turkey watchers see the judiciary as totally subordinate to Erodgan.

Cook also pointed out that another irritant in U.S.-Turkey relations is the fifteen to twenty Turkish-Americans, who are being detained in Turkey on legally dubious terrorism charges. Three U.S. Foreign Service officers are also being held as “bargaining chips” for Gulen and other political enemies that Erdogan is seeking to extradite back to Turkey. Although Erdogan has demanded that Gulen be extradited to Turkey to face a trial for his “crimes,” hitherto U.S. authorities including the FBI, have found little evidence to implicate the septuagenarian cleric.

Despite warming ties with Russia and major differences with the United States, Barkey expressed skepticism that Turkey would ever leave NATO. “You can play footsie with the Russians as long as you have NATO behind you,” he remarked. Nevertheless, Cook cautioned that if Erdogan goes through with the S-400 purchase it will further deepen Turkey’s growing isolation within NATO.

Certainly, the strong personalities of Trump and Erdogan have contributed to fractious relations, but ultimately bilateral tensions go much deeper. As Cook pointed out, the rift between the once staunch allies is due to structural issues that go far beyond personal factors.