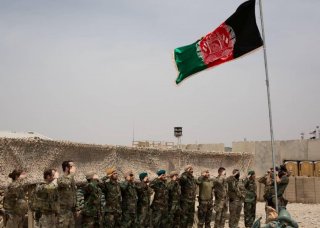 From the earliest days of U.S. operations in Afghanistan, the United States did something perplexing. Even while developing the Afghan National Army as part of a wider state-building enterprise, U.S. forces began training and funding separate units under the command of warlords, to assist in countering Al Qaeda. These were largely independent operations and not coordinated with Kabul. Many within these units were paid at salaries higher than what the formal army was offering—which directed recruits away from the army and empowered warlords over the official security forces the United States was supposedly supporting. In an article for Foreign Affairs, authors Anja Manuel and P.W. Singer commented that as a result, no coherent plan has emerged to integrate or demobilize warlords, and, “If things continue in this way, the present dream of a self-reliant army serving the Afghan people seems almost certainly doomed to failure.” They wrote that in 2002.

Fast forward nearly 20 years, and that prediction seems to have largely borne out. The Afghan security forces’ hold on the country remains tenuous, and they continue to rely on international support, particularly for the air force. The Taliban’s influence has grown steadily, as has its territorial control, its capacity to carry out regular attacks, and its sense that the war itself has been won. The contradiction between the goals of warfighting and institution-building is just one of many factors in the failures of the United States and NATO countries to build up capable security forces in Afghanistan, but it is one of the most important, most ignored, and unfortunately, likely to be repeated.

The United States engages in security cooperation with some 147 countries around the world, through measures such as direct security aid, training, joint exercises, and arming and equipping security forces. It is a challenging enterprise under the best of circumstances, with a growing body of work suggesting that its efficacy in achieving stated objectives is shaky at best. The intersection of assistance with local social, political, and security dynamics is difficult to predict and even more difficult to manage.

And Afghanistan has not enjoyed the best of circumstances. Instead, the United States was attempting its most ambitious security assistance effort while simultaneously fighting a war. As the United States found, the objectives of managing parallel efforts to dull the Taliban’s advance and simultaneously constructing and staffing a formal Afghan security sector were often at odds.

In fact, warfighting so dominated the U.S. perspective in 2001 that security sector development and reform barely registered among U.S. policymakers prior to the invasion or just after. Narrow military efforts to dislodge the Taliban and destroy Al Qaeda’s sanctuary took precedence over all else, obscuring the need for post-conflict planning, especially in the security sector. In the early days of the invasion, the development of the Afghan National Defense and Security Forces (ANDSF) was such a sideshow to the wider war effort that then-Defense Secretary Donald Rumsfeld even suggested the U.S. financial commitment to the Afghan security sector “should be zero.”

The phenomenon was compounded by early victories, including the apparent defeat of the Taliban and the “success” of the invasion, further obscuring the need to focus on rebuilding Afghan security forces. A deceptive calm of the immediate post-Taliban period led war-oriented defense planners to deprioritize the security sector, despite the urgent need for capable security services. As a result, security assistance and defense institution building lagged behind Afghanistan’s more immediate security challenges.

Even as the need for a new Afghan security sector became more apparent, wartime and defense institution building objectives were often at odds, particularly when it came to supplying soldiers for the frontlines. Between the need to create a quality force and the need for quantity of force, the wartime imperative of quantity consistently won out. Training cycles were frequently shortened, and the end strength of the ANDSF repeatedly increased with the aim not of strengthening security institutions, but of ensuring a sufficient supply of “trigger-pullers.”

The phenomenon was even more pronounced when it came to the development of the Afghan police sector. The pressing need for a system of law enforcement and criminal investigation was overridden by the need for additional frontline forces to fight the Taliban insurgency. Especially after the transition to a conventional counterinsurgency mission, the Afghan police became the “hold” force in the clear and hold strategy pursued by U.S. and Afghan forces. As a result, justice and law enforcement systems were virtually non-existent, creating a barrier for progress in state-building and undermining the legitimacy of the central government in the eyes of Afghans.

Similarly, despite a security assistance strategy that envisioned the development of a highly centralized state focused squarely in Kabul, the U.S. counterterrorism mission continued to depend on militia leaders and warlords working in parallel to the central government, and who often competed with the state for authority and legitimacy.

From the U.S. side, the focus on winning the war also distorted incentives to reflect honestly on the ANDSF’s shortcomings. Assessments of the ANDSF were often predisposed to exaggerate their performance, and trainers were routinely encouraged to overstate the effectiveness of Afghan troops.

Similarly, battlefield necessities frequently led U.S. troops to take the lead in joint operations, shielding Afghan forces from experiences and potential failings. Pressure to improve security conditions on the ground, coupled with a mandate for Afghans to lead operations created an environment where international forces filled gaps in Afghan capabilities, concealing serious deficiencies in the ANDSF’s performance and abilities.

Perhaps most poignantly, as the United States prepares to fully withdraw troops and contractors by September 2021, there are already reports that U.S. intelligence agencies are choosing to engage militia leaders operating outside formal Afghan security structures—a strategy of investing in non-state actors that both acknowledges the importance of Afghanistan’s informal security sector and perpetuates it.

When the United States invaded Afghanistan in 2001, its aim was not the development of an Afghan state. It was the defeat of the Taliban to prevent the territory from being a base of operations for future acts of international terrorism. Over the intervening two decades, state-building became a central component of the U.S. strategy, though only inasmuch as it created conditions for the U.S. to see an end to the conflict. As others have rightly pointed out, U.S. security assistance, even under the best of circumstances, is often plagued by an overly tactical approach over long-term capacity building. This dynamic was so exacerbated in Afghanistan that the U.S. strategy seemed to ping pong at times between warfighting, counterterrorism, security assistance, and retreat.

Although it is impossible to reverse the missteps of the Afghanistan security assistance endeavor, there are a few steps the U.S. and international partners could take to optimize security assistance in the future, whether residual assistance in Afghanistan or elsewhere around the world. First, the U.S. government must develop a more robust understanding of how a combat environment competes with security assistance objectives. The unique circumstances of 9/11 that led to the conflict in Afghanistan gave particular weight to the calculus to build up security forces while simultaneously conducting a war. But policymakers should be aware that a focus on tactical gains today at the expense of building longer-term capacities is not a sustainable strategy.

Even if they must take place in a conflict zone, assistance relationships should still be founded on an agreed-upon long-term vision that can accommodate on-the-ground developments, while maintaining a firm strategic trajectory. Objectives should be reasonably achievable through the limited means of security assistance and should be integrated into the broader policy aims of the U.S. and recipient governments.

Despite commonality in material, institutions, and subject matter, warfighting and security assistance are two vastly different undertakings. When layered on top of one another, as seen in Afghanistan, they can create dangerous contradictions in objectives, and in some cases, distort strategy and goals. With the U.S. engaged in active combat in at least 14 countries, and perhaps more depending on terms of classification, it is not inconceivable that the United States will find itself in this position again. If it must, it will be essential for policymakers to build a strategy that accounts for and de-conflicts the separate objectives of winning a war and developing the forces necessary to do so.

Lauren Woods is the Director of the Security Assistance Monitor (SAM) at the Center for International Policy, and Elias Yousif is the Deputy Director of SAM. They are the coauthors of a newly released report on security assistance in Afghanistan from 2001 to the present. They tweet @LDWoods3 and @EliasDJyousif.