Was the Taliban’s Top Political Leader Sidelined After a Gunfight? 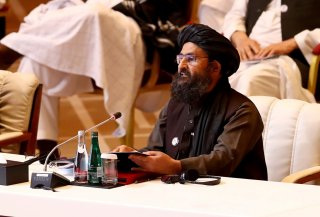 Political passions have on occasion driven even well-heeled politicians to brawls in the august halls of power. According to some reports, the Taliban, triumphant following their overthrow of the U.S.-backed government of Afghanistan, may not have proven immune to the temptation.

In mid-September, Bloomberg News reported allegations that earlier that month, in a cabinet meeting intended to hash out the composition of the Taliban’s transitional government, Khalil ur-Rahman Haqqani—a wanted international terrorist and a leader of the Pakistan-based Haqqani network— "rose from his chair and began punching” Mullah Abdul Ghani Baradar, the cleric who secured the 2020 deal that paved the way for the Taliban’s sweeping victory this summer. Baradar was also named in Time’s list of 100 most influential people in 2021.

Both Haqqani and Baradar belong to the Pashtun ethnicity, Afghanistan’s largest ethnic demographic encompassing roughly forty percent of the population, and a core base of support for the Taliban. But Baradar angered Haqqani by arguing the Taliban needed to be more inclusive and incorporate more minorities and non-Taliban political elites like former president Hamid Karzai to strengthen the transitional government’s legitimacy.

Allegedly, after Haqqani struck Baradar, bodyguards became involved and a firefight broke out at the meeting, resulting in several killed and wounded.

Initially, it was rumored Baradar had been killed, but later it became clear he was uninjured. The Taliban emphatically denied a violent incident took place, or indeed that there was any major disagreement whatsoever. Baradar himself appeared on TV and read from a script denying any divisions with the Haqqanis.

Historically, the Taliban has concealed reports of unfavorable internal developments—for example, founder Mullah Omar was claimed to be still living up to two years after his death from tuberculosis. However, it’s also plausible the reports of violent infighting were planted by the group’s enemies, or are an exaggeration of a real incident, as the report has not been independently verified by other sources.

But whether fists and bullets actually flew in the meeting room, as Bloomberg’s anonymous sources claimed, or merely harsh words were exchanged in a tense negotiation—the aftermath was decisive.

Afghanistan’s thirty-three-person transitional government ended up being ninety percent Pashtun. This includes twelve members from the group’s original base of power in Kandahar and four internationally-wanted terrorists from the Haqqani network. It did not include any leaders outside the Taliban or even Taliban leaders from western Afghanistan. Needless to say, there were no women either.

Khalil, the alleged instigator of the brawl was appointed Minister of Refugees, while his boss Sirajuddin Haqqani was made Minister of Interior, in charge of ensuring public security for the same cities he had targeted with car bombings that killed hundreds of civilians in the recent past.

Seemingly aware of the bad look, a week later the Taliban appointed a few minorities and outsiders to additional posts of little power.

A less prominent cleric named Mullah Mohammad Hassan was appointed to be Prime Minister, while Baradar was made one of two deputy presidents. But Baradar subsequently missed a prominent visit from Qatar’s foreign minister and the cabinet’s first meeting.

Thus, Baradar—for years perceived as the Taliban’s political leader and diplomatic point of contact—may have been sidelined by the movement he founded alongside Mullah Omar in 1994.

Baradar and the Haqqanis

Baradar has long been considered the Taliban leader most willing to negotiate with the United States and even handle internal disputes. He had lived outside of Afghanistan for two decades, first in Pakistan and later in Qatar where he negotiated the agreement for a U.S. withdrawal in 2020. However, his base of power within the Taliban itself diminished greatly during a period of imprisonment in Pakistan between 2010 and 2018.

The Haqqani network, meanwhile, is a fundamentalist group founded in the 1970s by Jalaluddin Haqqani, predating the Taliban considerably. During the anti-Soviet war of the 1980s, the network cultivated ties with Pakistani intelligence agencies and international jihadists such as Osama Bin Laden. Later, they were associates of Al Qaeda and allied with the Taliban in 1995 after the then-new group captured Kabul. However, the network didn’t fully merge with the Taliban until 2016.

From bases in Pakistan and southeastern Afghanistan, the Haqqanis orchestrated attacks that sometimes penetrated deep inside military and intelligence bases of international forces. However, they were most notorious for carrying out car bombings that caused massive civilian casualties, including a truck bomb that killed over 150 Afghans in Kabul in 2017, and an ambulance-borne bomb that slaughtered 103 people in a crowded Kabul square in 2018.

The negotiations to form the Taliban transitional government were attended by Pakistani spymaster Lt. Gen. Faiz Hameed, head of the Inter-Services Intelligence agency, who Bloomberg’s sources allege “favored” the Haqqanis, or by another account, assuaged their concerns by making sure they weren’t left out of the government.

The ISI agency regards Haqqani as a key ally and partnered with the network in the July 2008 bombing of the Indian embassy in Kabul that resulted in fifty-eight deaths.

For the sake of ordinary Afghans, one can only hope Taliban rule will prove less brutal than in its first period of governance in the mid-to-late 1990s. Unfortunately, early signs give cause for pessimism.

For example, it has re-instated a ban on public music, and Taliban fighters murdered a prominent folksinger. The minister of education has claimed that high school and college diplomas “have no value,” and schools have reopened for boys but not girls. Taliban fighters also reportedly beat and murdered a pregnant policewoman in front of her family, and have beaten journalists as well.

Such brutal tendencies threaten the Taliban’s quest for diplomatic recognition and foreign aid—and the group needs funding to halt Afghanistan’s slide towards financial and economic ruin and to maintain what government institutions remain.

China, Pakistan’s most important ally, is hesitant because it is generally opposed to Islamist groups, which it sees as inspiring Uighur separatism in Xinjiang province.  However, Beijing may be convinced it has more to gain than to lose by courting the Taliban, as a reliable commercial relationship could add an additional paving stone for its Belt and Road Initiative running through Central Asia. Recently, there were unconfirmed reports the People’s Liberation Army has conducted a feasibility study of deploying personnel to the Bagram airbase if invited by the Taliban.

There are also rumors that substantial Saudi financing may materialize for the Taliban, possibly as a tradeoff for marginalizing the southwestern Taliban commanders with ties to Iran, Saudi Arabia’s regional rival. Saudi Arabia was one of the only governments to recognize Taliban rule in the 1990s, along with Pakistan and the United Arab Emirates.

Other players include Turkey, keen to be seen as a global champion of Islam, which has already struck a deal with the Taliban to administrate air travel at the international airport near Kabul, and Qatar, which sees the events in Afghanistan as a victory-by-association of the negotiations it hosted on its soil.

For now, then, Baradar’s fall from favor suggests that Taliban leaders are confident they will receive the necessary international support even having accorded prominent seats in the government to terrorists with multi-million-dollar bounties on their heads.