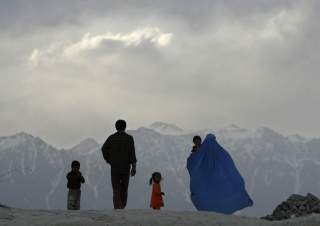 There’s a famous saying that the definition of insanity is doing the same thing over and over again and expecting different results.

By that measure, Washington has tested the limits of sanity with its strategy in Afghanistan: For seventeen years, it pursued the same policy while hoping in vain that it would produce the desired outcome.

Recent months, however, have brought a much-needed course correction. The new policy is rife with risk, but it’s the right policy—because it’s the only viable option Washington has left, the timing and conditions are right for it, and most importantly it puts America in a stronger position for an eventual but inevitable withdrawal from Afghanistan.

For nearly two decades, U.S. troops tried to wear the Taliban down on the battlefield, hoping that such relentless pressure would convince the insurgents to agree to negotiate an end to America’s longest-ever war.

That goal motivated the American troop surge a decade ago. More recently, it was reflected in the Trump administration’s Afghanistan strategy, which was announced by the president in 2017.

This consistent goal, however, has consistently failed. Years of U.S. war efforts have done little to convince the Taliban to stop fighting. This month, the insurgents announced the start of their annual spring offensive—a largely symbolic declaration, given that the Taliban now fights year round, even during the brutal winter months.

However, as President Donald Trump’s patience for fighting it out in Afghanistan has worn thin and his desire to bring troops home has increased, U.S. policy has changed significantly: It has given up on the idea of battering the Taliban on the battlefield and bringing the insurgents to the negotiating table from a position of weakness. Instead, it just wants direct talks with the terror group—in large part because it holds more territory than at any other time since the insurgency began in 2001, they have never been stronger.

To this point, there have been five rounds of talks, with the next round expected later this month. Zalmay Khalilzad, a seasoned Afghan-American diplomat, is the lead U.S. negotiator. The State Department—a marginalized agency during the early months of the Trump administration—is leading from the front in a determined effort to achieve what is now Washington’s prime objective in South Asia: concluding a deal with the Taliban that allows U.S. forces to leave Afghanistan.

The two sides have come close to reaching a framework agreement that would feature a timeline for a U.S. troop withdrawal and a Taliban pledge to deny space to international terrorists. Washington is also pushing the Taliban to agree to a ceasefire and to negotiations with Afghan leaders on a postwar political arrangement. However, the Taliban doesn’t want to address those latter two issues until there’s a troop withdrawal deal.

The Perils of Pushing for Talks with the Taliban

Washington has essentially agreed to enter talks with the Taliban from a position of weakness. That’s typically a no-no in negotiations.

Not surprisingly, there’s good reason to fear that these U.S.-Taliban talks won’t end well for Washington—or for Afghanistan.

First, the Taliban is on the offensive and comes into talks from a position of strength. Unlike the United States, the insurgents have no urgency to strike a deal. They have the option of turning down insufficiently generous concessions, rejecting unnecessarily harsh demands, and happily returning to a battlefield that’s been quite kind to them. By contrast, U.S. negotiators are under pressure to get a deal, because Trump wants out. Washington doesn’t have the luxury of taking it slow.

Second, the Taliban has refused to let the Afghan government join the talks until there is a U.S. troop withdrawal agreement. This raises the absurd possibility of Kabul getting shut out of the early stages of its own peace process. But because the Taliban has so much leverage, Washington is in no position to get the Taliban to relent.

Third, even if Washington and the Taliban conclude a deal, paving the way for a withdrawal of U.S. forces, the insurgents—seizing on what would be a battlefield opportunity for the ages—could decide to take up arms anew instead of laying down their arms, and try to overthrow the Afghan government instead of negotiating a deal with it.

In effect, by pursuing talks with the insurgents, Washington risks handing the keys to Kabul over to the Taliban.

The Case for the Least Bad Option

Still, despite these valid concerns, pursuing talks with the Taliban is still the right thing to do for four main reasons.

First, there is no military option. America and its allies clearly can’t defeat the Taliban on the battlefield. If more than 150,000 NATO troops couldn’t tame, much less defeat, the Taliban during the height of the surge, then you can bet your bottom dollar that the 14,000 there now can’t do so either. And there is zero political will or public appetite in Washington and other NATO capitals for a larger troop surge.

Second, the war is getting worse, and fast, with the trend lines pointing to an intensifying conflict. True, the war is in a stalemate: the Taliban enjoys ample influence and control in rural areas, while Afghan forces maintain influence and control of cities. Still, this is an increasingly bloody stalemate. Casualty figures for Afghan security forces and civilians reached their highest-ever point in 2018. Afghanistan’s opium harvests, which finance a large proportion of the Taliban’s operations, have also broken new records in recent years. And the Taliban has never controlled or contested more territory.

The sobering reality is that the Taliban keeps getting stronger, and the war keeps getting bloodier. If there’s ever been a time to double down on talks, it’s now.

The third reason why the administration should be pursuing talks with the Taliban is that conditions have never been better for them. Last June, the Taliban agreed to a brief truce to coincide with the Eid holiday, suggesting that it’s at least open to the idea of thinking about peace. Meanwhile, the Taliban has sent several of its very top officials to the talks with the United States, including a chief of staff to supreme Taliban leader Mullah Akhundzada. Also, lead Taliban negotiator Mullah Baradar is one of the group’s founding leaders. The Taliban wouldn’t be rolling out its biggest guns if it just wanted to test the waters and see what Washington has to offer in negotiations.

The fourth and most important reason for the Trump administration to pursue talks is that doing so makes it easier to justify withdrawing from Afghanistan—whether the talks succeed or not. The reasoning is simple: We’ve tried the military option, and that didn’t work. Now we’re trying the diplomatic option. If it works, great, and if it doesn’t, we can say we tried our best and then head for the exits.

There’s much to be said for getting out of Afghanistan, and especially after nearly eighteen years logged, hundreds of billions of dollars spent, and nearly 2,500 American lives lost.

If America stays in Afghanistan, then it will have to continue logging those years, spending those billions, and putting those American lives at risk—and with no reason to believe the war will end.

A Reality Check on the Risks of a Withdrawal

This isn’t to understate the risks of a U.S. withdrawal.

First, America would suffer a major reputational blow. Afghanistan would see itself having been abandoned by the United States, just as it believes it was after the Soviet withdrawal in 1989. And the Taliban would score a major propaganda victory, as it could boast that it had expelled the American invaders.

Second, a U.S. withdrawal could enable America’s core strategic competitors and rivals to step into the vacuum and deepen their footprint and influence in Afghanistan. China, Iran, and Russia are all in Afghanistan’s greater neighborhood.

Third, a U.S. departure, which would deprive already-beleaguered Afghan forces of critical support, could hasten destabilization and plunge Afghanistan into chaos and perhaps even civil war. The Taliban could make major advances, seize more territory, and even threaten to take over Kabul. What would be particularly tragic, beyond the increased violence, is that the very real progress made in Afghanistan over the last eighteen years could go up in smoke. It’s easy to forget, amid all the bad news stories from Afghanistan, that the country is in a better place now than it was before the arrival of U.S. forces. There have been major advances in human rights, girl’s education, and infrastructure development.

Fourth, a U.S. withdrawal could enable Afghanistan to revert to the terrorist sanctuary that it was in the late 1990s. Organizations such as Al Qaeda and the Islamic State, taking advantage of worsening militancy and the state’s eroding writ, could carve out new spaces to plan attacks on U.S. interests. The history of the late 1990s could repeat itself.

These risks are as real as they are serious. However, several are overstated, and others can be mitigated.

First, a postwar Afghanistan may be too violent and chaotic for U.S. strategic rivals to deepen their footprint. While they wouldn’t admit so publicly, Beijing, Moscow, and Tehran have all benefited from the security umbrella provided by the U.S. military. In the case of Beijing and Tehran, it facilitates their ability to pursue interests in Afghanistan (such as building infrastructure projects and assisting Afghanistan’s Shia minority, respectively). And for all of them, it helps prevent the undesirable cross-border spillover effects—such as an intensified drug trade and refugee flows—that would result from greater instability.