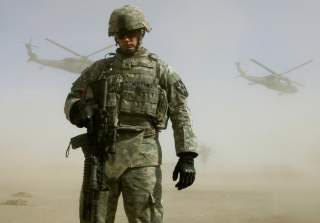 The U.S. military has been making preparations to comply with a request to leave Iraq by the country’s parliament and acting prime minister, leaving the U.S.-led counter-ISIS coalition without a backup plan for continuing its war against the deadly terror group.

The assassination of high-level Iranian commander Gen. Qassim Suleimani by a U.S. drone on the road to Baghdad International Airport on January 2 enraged political leaders in Iraq, who demanded an end to the U.S. presence. U.S. counterterrorism partners on the ground were left unprepared for the Iraqi reaction, as the Trump administration had never discussed the possibility that Iraq would oust U.S. troops.

The National Interest has learned from four different people involved with U.S. counterterrorism planning that U.S. officials had not previously discussed with partners participating in its counter-ISIS coalition, which relies on U.S. supply lines running through Iraq, what the next steps would be if those supply routes were dismantled.

This new layer of chaos is surfacing just as the coalition has suspended its counter-ISIS operations inside Iraq in the wake of a decision by Iraq’s outgoing prime minister, Adil Abdul-Mahdi, to ask U.S. troops to leave the country. In response, Brig. Gen. William H. Seeley III wrote a letter about “repositioning forces over the coming days” to the Iraqi ministry of defense. The letter leaked to social media on Monday.

“We respect your sovereign decision to order our departure,” Seeley stated.

Reuters and Agence France Presse confirmed the authenticity of the letter with both U.S. and Iraqi sources, but U.S. officials soon walked back its contents. Soon after American press verified that the letter existed, Gen. Mark Milley told reporters that it was an unsigned draft sent out for coordination purposes—but he did not deny its authenticity. Meanwhile, Secretary of Defense Mark Esper sought out reporters at the Pentagon and informed them that there had been no “decision to leave Iraq.”

Iraq’s backlash began after Trump chose to kill Suleimani from a menu of military options in December. Secretary of State Mike Pompeo had reportedly lobbied Trump for months to kill Suleimani who, according to Abdul-Mahdi, was traveling through Iraq on a diplomatic mission when he was assassinated. Iraqi military commander Abu Mahdi al-Muhandis was also killed during the drone strike.

The Trump administration’s lack of planning raises questions about why officials presented the president with an option likely to enrage Iraqi leadership or provoke a wider war with Iran that had the same effect if they weren’t prepared for the fallout.

The failure to plan ahead is a well-known pattern of the Trump administration, said Ahed Al Hendi, a Syrian-American activist who has attended meetings with Kurdish leaders. Al Hendi confirmed that U.S. and Syrian Kurdish officials never discussed this possibility.

“They never even discussed issues that were expected to happen, like the Turkish invasion,” he said, referring to Turkey’s long-threatened incursion into Syria, which occurred in October. “No wonder why they would never discuss . . . if the Iraqi parliament or the Iraqi government asked us to leave.”

Syrian Kurdish diplomat Sinam Mohamad confirmed that she had not met with U.S. officials to discuss the possibility that U.S. forces could be expelled from Iraq.

Additionally, two other people—one who had experience with counterterrorism planning and another who didn’t have permission to speak on behalf of their government—have confirmed to the National Interest that U.S. officials had never presented a serious contingency plan to Iraqi Kurdish leaders.

“[The Iraqi Kurds] knew this was coming, but [U.S. officials] never took it seriously,” one person said. “That is the problem with the State Department. They don’t plan.”

Al Hendi claimed that he had witnessed Iraqi Kurdish officials bring up the possibility of an Iraqi push to expel U.S. troops only to watch U.S. officials rebuff their concerns.

“When [U.S. officials] sit with the [Iraqi] Kurds, they always try to show them that they like to deal with the central government, and they respect the sovereignty of Iraq,” Al Hendi said. “I think we were so confident that we’re staying there, and that nobody was asking the U.S. to leave Iraq.”

The Iraqi Kurdish diplomatic office in Washington said that it did not have any comment to offer.

Defense Department spokesman Lt. Col. Thomas Campbell told the National Interest that the department does not “discuss internal deliberations or military planning except to say that the U.S. military is continually planning for contingencies.” The State Department did not respond to a request for comment.

The Trump administration began a “maximum pressure” campaign against the economy of Iran, which has close ties to many Iraqi political factions, in June 2019. But there is little evidence that the administration planned for a future without U.S. access to Iraq, even as maximum pressure moved from economic to military means.

Matthew Brodsky, a national security expert close to the White House, was eager to talk about the Trump administration’s logic of deterring Iran on Saturday night. But asked about the planning for an Iraqi expulsion of U.S. forces, he refused to go “further than what either the White House or State Department has said publicly.”

Neither the White House nor the State Department made any statements on the legal status of U.S. forces in Iraq until the parliament had already voted to oust U.S. troops.

Trump reacted to the news by promising that he would not remove U.S. forces from Iraq “unless they pay us back” for the cost of the post–2003 occupation, adding that his administration will impose “very big sanctions on Iraq” if “they do anything we think is inappropriate.”

Combined Joint Task Force Operation Inherent Resolve, however, erred on the side of caution. The coalition suspended all anti-ISIS operations on Sunday, about an hour before the Iraqi parliament vote, but blamed its decision on “repeated rocket attacks” launched by Kata'ib Hezbollah over the past few months.

“This has limited our capacity to conduct training with partners and to support their operations against Daesh [ISIS] and we have therefore paused these activities, subject to continuous review,” Lt. Gen. Pat White said in a Sunday morning statement.

Kata’ib Hezbollah is an Iranian-backed militia at the center of recent tensions. U.S. forces clashed with Kata’ib Hezbollah in Iraq in the last week of December, prompting the militia’s supporters to storm the U.S. Embassy in Baghdad on New Year's Eve.

A few days later, Suleimani and al-Muhandis were assassinated via U.S. drone.