Washington Should Not Forget Oman 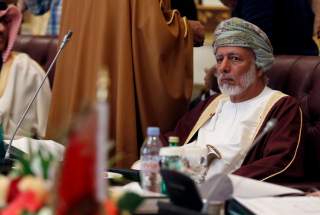 Whether it is the civil wars in Syria and Yemen, the fight against ISIS, Iranian aggression or the rift in Gulf relations, there is plenty happening in the Middle East to keep U.S. policymakers busy. However, with all the noise coming from the region, America should not ignore its relationship with the Sultanate of Oman.

Oman is a relatively small oil-producing kingdom with one of the Arab world’s smallest populations. It is also one of the oldest countries in the region. Because of its strategic location on the southeastern section of the Arabian Peninsula and the Strait of Hormuz, Oman and the United States share many of the same challenges in the Middle East.

Both countries have been partners for almost two centuries. The first contact between the United States and Oman was in 1790, but the relationship became formalized in 1833 after both nations signed the Treaty of Amity and Commerce—the first bilateral trade deal between the U.S. and an Arab Gulf state.

In 1840, Oman sent the first diplomat from the Arab world to be accredited to the United States. Oman became regionally important in a military sense for U.S. interests in 1980 when it became the first Gulf state to welcome an American military base.

Today, the U.S.–Oman relationship is broad. The countries share Oman’s only bilateral free trade agreement, which has been in force since 2009. There is also a close military relationship. The U.S. Navy regularly calls into Duqm, an important port located on Oman’s southern coast.

The United States can also use Oman’s military airfields in Muscat, Thumrait and Masirah Island. The Royal Air Force of Oman operates American F-16s, and other U.S. defense export deals are in the pipeline. However, with others creating closer links with Muscat, Washington cannot become complacent in this relationship.

While it is important that the United States works with multilateral organizations like the Gulf Cooperation Council (GCC), it should also maintain strong bilateral relations with individual countries in the Middle East. Oman is a preeminent example, and Muscat brings five important—and in some cases unique—attributes to the relationship.

First, Oman has served as an important interlocutor for the United States in the region over the years. Approximately 75 percent of Oman’s population observes Ibadi Islam—different from Sunni and Shia Islam, which allows it to avoid much of the sectarian strife which plagues the Middle East. This position has allowed Oman to play a unique behind-the-scenes role in facilitating many diplomatic initiatives in the region.

Secondly, for historical reasons, Oman has a very close relationship with America’s closest ally: the United Kingdom. Sultan Qaboos bin Said Al-Said has ruled since taking power from his father, with the help of the British, in a bloodless palace coup in 1970. In addition, the UK helped Oman to quell the Dhofar Rebellion (1962–1975). There is already very close Anglo–American cooperation in the Gulf, and trilateral U.S.–U.K.–Oman cooperation in the region brings strategic benefits for Washington.

Thirdly, for geographical and historical reasons, Oman has a unique relationship with Iran. Under certain circumstances, this could be beneficial to the United States. Oman and Iran are the two countries on either side of the Strait of Hurmuz. Like Britain, pre-revolutionary Iran provided 4,000 troops to help Oman defeat the Dhofar Rebellion. Over the years, Oman has helped to secure the release of U.S. hostages in Iran and in Yemen. Often, Oman’s relationship with Iran is misunderstood in the West. Publicly, Oman maintains cordial but pragmatic relations with Iran. Privately, senior officials express the usual concerns heard around the Gulf region about Iran’s activities.

Fourthly, Oman tends to offer an alternative and important point of view inside the GCC. This should be viewed by the United States as a strength, not as a weakness. Oman is very cautious, continuously balancing its relations with all countries in the region. In a region where many issues are dangerously viewed as either “black or white,” Oman’s nuanced and deliberate approach to regional challenges makes Muscat an important voice to be heard in the Gulf.

Finally, Oman is a regional and Islamic leader in preventing radicalism. Not a single Omani citizen has been known to join the ranks of ISIS. The Australian-based Institute for Economics and Peace’s Global Terrorism Index for 2017, which assesses the impact of terrorism on countries using a scale of zero to ten, ranks Oman a zero, making it one of only twenty-nine countries in the world and the only country in the Middle East and North Africa to achieve this score.

There are some sticking points in the bilateral relationship that need to be addressed.

The current steel and aluminum tariffs in place by the United States not only negatively impact the relations with notable American allies like Canada or the UK, but also smaller ones like Oman. Over the years, Oman has done much to diversify its economy, and the steel and aluminum sectors have played a key role in this. Not only are these tariffs bad for the American consumer, they also needlessly complicate America’s bilateral relationships.

Additionally, Oman has a long and porous border with Yemen, and there have been concerns that Omani territory has been used by Iran to smuggle weapons to the Houthis in Yemen. There is though no evidence of Omani authorities assisting or allowing Iran in its weapons smuggling. Anyone who has traveled to the region knows how remote and dissolute some areas are. If weapons are in fact making their way to Yemen via Oman, then this is an affront to Omani sovereignty.

The United States should help Oman with its border security and counterterrorism capabilities. This would benefit both countries. For centuries, Oman has been a friend of the Washington while serving as an important diplomatic actor behind the scenes in the region. Good relations with Muscat will benefit not only the United States, but also the UK and other allies in the region.

Only the geopolitically inept would fail to see Oman’s importance to advancing U.S. interests in the Middle East. America’s relationship with Oman should not be ignored.