Washington's New Worry: Iran Has a Reputation for Letting Its Lust for Revenge Simmer 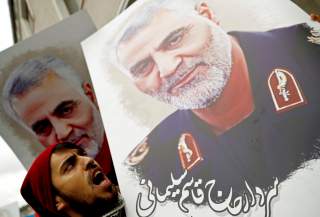 The assassination of Maj. Gen. Qassem Suleimani, the head of the Iranian Revolutionary Guard Corps (IRGC) Quds Force, has shocked the world. Qassim Suleimani was considered the second most prominent figure after Ali Khamanei, the current Supreme Leader of Iran. Suleimani, for the Iranian youth, was more like a heroic and spiritual figure than simply the head of the IRGC. He was known in the United States as the “Shadow Commander.” Suleimani was so prominent that he shaped Iran’s foreign policy. He was known to have sent a message to Gen. David Petraeus, who was the commander of the US forces in the Middle East in 2008, “Dear General Petraeus, you should know that I, Qassem Suleimani, control the policy for Iran with respect to Iraq, Lebanon, Gaza, and Afghanistan.”  Without a doubt, after the assassination of Suleimani, the Middle East will never be the same. So, what should we expect next?

Iran’s recent ballistic missile retaliation to American bases in Iraq and President Donald Trump’s subsequent press conference provide us with clues for the future. By deliberately missing U.S. military personnel, and giving out de-escalatory messages that Iran “has concluded its proportionate measure doesn’t seek escalation or war.” Tehran seems to be aware of its limits vis-à-vis Washington. In the same manner, by not further responding to Iran’s missile attacks and by signaling that he is open to negotiations with Iran, Trump too seems to desire that an all-out war not transpire. Although these are strong indications that we are unlikely to see a “2003 Iraq” type of military engagement, the “beef” between Washington and Tehran is not over. Iran’s leadership simply cannot afford to close the issue of “revenge” with only one salvo of a nonlethal missile attack. This attack created a perception that it is not comparable to the killing of, probably, the second most prominent figure in the country. Doing so would lead to the implosion of the regime and severely tarnish its credibility during a time when it is at its weakest due to constricting sanctions and the ensuing mass demonstrations.

Having to show restraint to overt bombing of American bases will remain a sore spot for Trump’s self-esteem. Furthermore, Trump, as seen in his post-missile strike speech, will continue to use Tehran’s unwavering desire to develop nuclear capabilities as a justification to take his own “revenge” when the time is right.

So, what should the next phase look like? It will be a protracted and highly elaborate American Iranian proxy war that very well may transcend the Middle East.

A network of major Shia militia organizations such as Asa’ib Ahl al-Haq, Kata’ib Hezbollah, and Badr Organization in Iraq, Hezbollah and the Amal Movement in Lebanon, the Houthi Movement in Yemen has provided the Iranian leadership unprecedented opportunity to project power beyond Iran’s borders. Hezbollah’s goal was to advance Iranian interest by fighting individual wars in Syria, Yemen and Iraq, in the post-Suleimani era, and it should be expected that the terror group will be united under one main idea: to expel the United States from the Middle East by any means necessary, just like the Mujahedeen did to the Soviets in Afghanistan. This effort will likely be made via covert attacks against direct American targets and/or American allies in the region. The formation of a comprehensive anti-American movement has already begun. Nasr al-Shammary, deputy head of the Harakat al-Nujaba group, one of the most hardline Shia groups in Iraq, announced that “We will regroup the forces of the resistance in a single entity to respond to Washington.” Moqtada al-Sadr, the prominent Iraqi Shia leader, reactivated his Mahdi Army last week, nearly a decade after dissolving the notoriously anti-American force.

Washington doesn’t have many options when it comes to countering the multifaceted Shia proxy network in the Middle East. Probably, the most viable choice for the Pentagon is the Kurdish People’s Protection Units (YPG), the Syrian branch of a wider Kurdistan Workers’ Party (PKK). Although the Pentagon used YPG extensively to roll back ISIS in Syria and Iraq, the signs of it being prepared to counter the Iranian influence have long been there. Long after the complete defeat of ISIS, the Pentagon continued to provide training  and supplied YPG with, by some estimates, thirty thousand trucks worth of weaponry. Having been dislodged from northern Syria after Turkey’s Operation Peace Spring, YPG is likely going to engage in anti-Iran efforts from southern Syria, such as the western Iraq (Ambar Province), although that comes with its own unique set of challenges. Finally, the world will likely see Washington’s increased efforts to reconcile the hostile Kurdish factions, particularly YPG/PKK and Barzani’s Kurdistan Democratic Party (KDP), to form a Kurdish/Sunni block to counter Iranian influence. Depending on the level of success, Washington’s effort may very well entail declaring an independent Kurdish state that would run from KDP dominated northern Iraq to YPG/PKK dominated southern Syria, cutting Iran’s access to Syria, Lebanon and the Mediterranean.

Iran’s ability to wage proxy warfare transcends well beyond the Middle East. In response to Israel’s 2008 assassination of Imad Mughniyeh, (a prominent pro-Iranian general who played a considerable role in Hezbollah’sdefeat of Israel in the Lebanon War of 2006), Iran waited for four years to “take revenge.” In 2012 Hezbollah blew up a bus carrying Israeli tourists in Burgas, Bulgaria, which killed seven and injured dozens. It can also be argued that the bus bombing was carried out as a reaction to Mossad’s assassination of Iran’s nuclear scientists Massoud Alimohammadi and Majid Shahriari in 2010.

The Suleimani assassination just opened up a new chapter in America’s ‘endless wars.’ Iran’s reaction pattern suggests that we will witness a protracted proxy warfare which can be spread out over time - months, even years. It has yet to be known whether Trump is going to fulfill his campaign promise of ‘bringing our boys back home,’ which, if happens, suggests Washington’s reliance on its own proxy forces, notably the Kurdish YPG. One thing is almost certain; neither Iran nor America and Israel would want the other’s total defeat. It is the growing Iranian threat that has legitimatized Israel within the wider Muslim-Arab Middle East, particularly Saudi Arabia and the Gulf Emirates, giving Israel the recognition and relative security that it has sought for decades. Also, as for Iran, in light of the excruciating sanctions imposed on the country, the Mullahs continue to seek legitimacy and power among the Iranian citizens by keeping the anti-Israel, anti-American sentiment alive. The United States has also benefited from the Iranian threat by easily imposing its terms on the oil-rich Arab states around Iran. Therefore, neither Israel, America, nor the Mullahs would desire the complete destruction of “the enemy,” since it appears the mutual animosity serves to the interest of each of these parties.