Welcome to the West Bank Wars 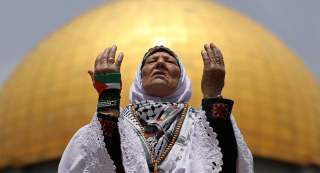 “Today, I announce my intention, with the establishment of the next government, to apply Israeli sovereignty over the Jordan Valley and northern Dead Sea,” Netanyahu said in a surprise press conference on September 10. “This will be the first step if I receive your trust.”

“This is the eastern border of the State of Israel,” he said. “This is our vital security belt. It is a defense wall that guarantees we will never return to being a country only a few kilometers.”

Israeli voters across the political spectrum dismissed the proposal as mere speculation. Hassan Muammer, a resident of the Palestinian territories, told the National Interest that he hadn’t even heard news of the latest proposal: “It's nothing new.” But the Palestinian Authority warned that Netanyahu’s action could scuttle any Israeli-Palestinian peace deal.

Israel captured the territories from Jordan and Egypt in a 1967 war, settling off a bloody, decades-long insurgency by the Palestinian independence movement. In the Oslo Accords of 1993, Israel allowed a semi-autonomous Palestinian Authority to govern Arab-majority cities and towns in the territories. But the Israeli military held on to Area C, a tract of rural land which has been settled by hundreds of thousands of Israeli citizens.

Netanyahu’s proposal would absorb the Area C settlements in the Jordan Valley. He made it clear that the Arab-majority city of Jericho would remain under the Palestinian Authority, and “not a single Palestinian will be annexed.”

But annexing the valley to Israel would cut the Palestinian Authority off from its only land border.

“The international community must act now to prevent Netanyahu and his allies from burying any remaining prospects for peace and a viable and independent Palestinian state,” said chief Palestinian negotiator Saeb Erekat. “Israel’s plan to annex the Jordan Valley, an integral part of occupied Palestine, is manifestly illegal and merely adds to Israel’s long history of violations of international law.”

The embassy of Jordan, which owns the east bank of the valley, referred the National Interest to a Twitter statement by Foreign Minister Ayman Safadi: “[the League of Arab States] is unanimous in condemning Israel PM announcement he will annex settlements & Jordan Valley in occupied [West Bank]. Killing all chances for peace for electoral purposes is irresponsible, dangerous. Intl community must state it rejects such futile attempts to consolidate occupation.”

The reaction to Netanyahu’s statement endangered President Donald Trump’s attempts to broker an Israeli-Palestinian peace deal, which have already been delayed by the resignation of Special Presidential Envoy Jason Greenblatt.

“There is no change in United States policy at this time,” a State Department official told the National Interest. “We will release our Vision for Peace after the Israeli election and work to determine the best path forward to bring long sought security, opportunity and stability to the region.”

The National Interest has confirmed that the State Department was aware of the proposal before it was made, and that the U.S. government does not see it as an obstacle to a future political settlement.

Israeli voters believe the proposal doesn’t matter—because it’s unlikely to be carried out.

“Even his language showed it’s a stunt,” Jerusalem-based journalist Sam Sokol told the National Interest. “This feels different to me BUT it’s also hard to see him following through the way he described.”

Mohammad Darawshe, executive director of the Center for Shared Society at the Givat Haviva Institute, compared Netanyahu’s campaign to a clearance sale: “willing to make any ridiculous reductions and concessions.”

“No need to take him seriously at this stage,” added the former director of the United Arab List, which represents Arab citizens of Israel in the Israeli parliament. “We remember his statement at Bar Ilan University where he pledge[d] to establish a Palestinian State as part of a two-state solution.”

Netanyahu endorsed Palestinian independence in a speech ten years ago, but has since walked back his statement.

“His main competitions are on the Right so he’s trying to show to those potential voters he can deliver what they want himself,” explained Israeli academic Elizabeth Tsurkov, a fellow at the Foreign Policy Research Institute. “The argument right-wing parties make is that Netanyahu needs to be pressured from the Right to enact a truly right-wing agenda and he is trying to prove them wrong.”

Netanyahu has been locked in a bitter rivalry with his far right former protegée Ayelet Shaked. Last week, Shaked pre-empted Netanyahu’s memorial for a 1929 anti-Jewish massacre in the Palestinian city of Hebron, challenging the Prime Minister to seize historically Jewish-owned properties from the city’s “murderous Palestinian mayor.”

“Applying Israeli sovereignty [to] the Jordan Valley is crucial for Israel’s strategic depth and security,” said Rachel Broyde, foreign spokesperson for Netanyahu’s Likud Party, in response to a question from the National Interest. “The only way Likud can do this is if we have the mandate to form the coalition. All those who want a right-wing government should vote Likud.”

“Being religious, I have faith and believe that all Israeli territories and all territories that were given to the Jewish people should be controlled by and should be part of the State of Israel,” said Nadav Newman, who grew up in Area C and plans to vote for a right-wing party. “That being said, I think anyone living there, being Jewish, Muslim, Christian, should be given the same rights and same abilities, as well as the same duties, as long as they're citizens and they're cooperative, and part of the nation.”

But an announcement so close to Election Day may not convince pro-annexation voters that Netanyahu is serious about accomplishing their goals.

“Politics is politics, and quite frankly, it's not as simple as him just saying I’m going to make this part of Israel,” Newman, who now lives in Jerusalem, told the National Interest. “That being said . . . I think he knows that if he, for any reason, is not able to build a government that will hold on and not collapse within a period of one month, he’s going to have to make a serious move that will impress the Israeli population.”

“We’ve seen an increase of settlers’ presence and action in the area after the statement of Mahmoud Abbas including Area C under the Palestinian control,” said Muammer, who lives in Battir, outside of Bethlehem. He claimed that a group of Israelis recently began construction work outside of his village, which is part of Area C. “I start talking with one of the settlers there, and they said we are going to cultivate olive trees.”

The new olive farm would be on land claimed by the Kisiya family, Muammer said.

On August 26, Israeli military vehicles demolished a nearby house and scenic restaurant belonging to the well-known local family. The Coordinator of Government Activities in the Territories, the military unit that administers Area C, insisted that the buildings had been constructed without a permit. The Kisiya family has also been engaged in a court battle with a group of Israelis that claims to have bought their land in 1969.

Muammer said that the land dispute has attracted attention throughout the Palestinian Christian community, including a visit by Archbishop Theodosius Atallah Hanna of the Greek Orthodox Patriarchate of Jerusalem. In a YouTube video of the demolition shared by the Kisiya family, a protester was seen waving around a cross while shouting, “the Virgin Mary will protect me and protect this land!”

“Christ said: Come unto me, all ye that labour and are heavy laden, and I will give you rest,” the Kisiya family said in a September 3 statement on their Facebook page. “I resisted this occupation at all levels of the courts in Israel, and won round after round, until they were unable to confront me legally.”

In practical terms, Area C is “already under Israeli sovereignty,” Muammer concluded. “Maybe there will be extra new legal regulations, that we will lose access to some left over parts, but the situation is already under the Israeli control.”