What do Republicans and Democrats Find Common Ground On These Days? Promoting Democracy In Iran 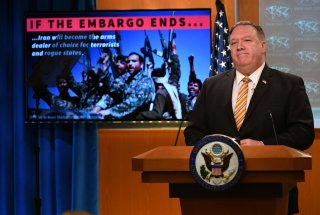 Bipartisan agreement in U.S. politics is extremely rare these days. But democracy for Iran is one cause that effortlessly unites the left and the right in unprecedented ways. On Wednesday, senior lawmakers from both parties joined leaders of Iranian-American communities in a Congressional briefing to introduce House Resolution 374.

The bipartisan resolution, endorsed by a strong majority in the House, condemns Iranian state-sponsored terrorism and expresses unambiguous support for the Iranian people’s desire for a democratic, secular, and non-nuclear republic in Iran.

H. Res. 374 has a growing list of Democratic and Republican co-sponsors, recently reaching 221 before it was presented to Secretary of State Mike Pompeo. The initiative involves representatives in Congress from forty-one states and twelve committees. It received enthusiastic support from the State Department as well.

During Wednesday's online conference, senior-ranking members of Congress, including Republican Tom McClintock and Democrat Brad Sherman, spoke to Iranian-Americans and lent their support to their cause.

McClintock said the resolution "comes at a time when the Iranian opposition to the regime, the National Council of Resistance of Iran (NCRI), is steadily gaining momentum. It has thus become the main target of the regime's global terrorism." Members of Congress point to a thwarted bomb plot against an NCRI rally near Paris in 2018 as evidence.

He also said: "Many of [NCRI] supporters have reportedly been arrested in Iran for their affiliation with this group."

The second-ranking member of the Foreign Affairs Committee, Representative Brad Sherman, said: "Now, more than ever, after thousands of people have been killed just in November of 2019, we stand with the people of Iran who are continuing to hold legitimate protests against an oppressive and corrupt regime."

The House resolution lines up equally well with Democratic principles and with the Trump administration’s strategy of “maximum pressure” on the Iranian regime. It outlines an assertive policy against a brutal regime but stops well short of endorsing boots on the ground. Instead, it supports the homegrown organized opposition.

Following the 2018 and 2019 mass protests against the theocracy, regime officials, including supreme leader Ali Khamenei, blamed the largest component of the NCRI, the Mujahedin-e Khalq (PMOI/MEK), for organizing and leading protests.

The largest series of protests broke out in 2018, a year that Maryam Rajavi, the NCRI's President-elect, had previously predicted would be a "year full of uprisings."

On Wednesday, in a video message to the Congressional online conference, Mrs. Rajavi commended representatives of the American people for co-sponsoring Resolution 374. She added: "The Iranian people have struggled against two dictatorships and for freedom. They overthrew the Shah and will continue their struggle to overthrow the mullahs’ regime and to achieve freedom. They are encouraged that this resolution supports one of their goals for a republic based on the separation of religion and state. The Iranian people will be inspired to know that the representatives of the American people hear their voice."

Previously, H. Res. 4744, condemned the regime's crackdown on dissidents, including the massacre of 30,000 political prisoners in the summer of 1988. Significantly, the new resolution makes it clear that such incidents are part of the DNA of the regime, and that they give Iran’s organized Resistance movement an undeniable right to pursue the ouster of the theocracy.

H. Res. 374 recognizes the Iranian people's struggle "to establish a democratic, secular, and non-nuclear republic of Iran." This is a clear expression of values that are shared across the political spectrum in the United States. It represents the endorsement of a grassroots Iranian movement to emulate democratic principles in the heart of the Middle East.

That vision has been laid out in some detail by Maryam Rajavi in the form of a ten-point plan for the free future of the country. If put into place with moral support from the American people and the rest of the international community, that plan would establish free and fair elections, separation of religion from the state, equal protection under the law for women and minorities, and a commitment to non-aggression and non-intervention with neighboring countries that are currently reeling under the destructive influence of the mullahs’ regime.

The further implications of the ten-point plan will inevitably be discussed in even greater detail at the NCRI annual rally scheduled for July. A number of American dignitaries will be in attendance, representing both parties.

The moral impact of this resilient support for Iran's democratic movement is immeasurably encouraging for people facing a ruined economy, political injustices, and fatal pandemics. At a time when the Iranian people show an overwhelming appetite for overthrow and democratic change, they can see that people around the world, especially in the United States, are cheering for their cause.