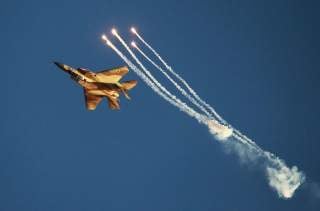 On June 18, the Syrian regime accused the United States-led coalition of targeting one of its military positions next to the Iraqi border in the Euphrates river valley. It soon emerged that the airstrike, which the coalition denied carrying out, had killed and wounded dozens of members of an Iraqi Shi’ite militia called Kata’ib Hezbollah. Iraq’s Popular Mobilization Units (PMU), of which Kata’ib Hezbollah is one member, claimed twenty-two fighters had been killed and that the airstrike hit its forty-fifth and forty-sixth brigades. A U.S. official told CNN that Israel had carried out the strike. The airstrike in mid-June did not come in a vacuum and has broad strategic implications. The strike was the first of its kind on Iraqi Shia militias operating in Syria. It also symbolizes Washington and Jerusalem's continuing concern with Iranian-backed militias operating in Syria.

The fallout from the airstrike rocked Iraq throughout the week. On Tuesday and Wednesday Kata’ib Hezbollah fighters clashed with Iraqi security forces, even though they are ostensibly a paramilitary government force that is part of those security forces. The deaths also put the Fatah coalition party in Iraq in an awkward position. It is made up of PMU supporters and its leader, Hadi al-Amiri, runs the Badr organization—a militia similar to Kata'ib Hezbollah. Amiri is trying to form a government with Muqtada al-Sadr, but he also has to work with the United States in Iraq. This is because the American-led coalition is still training Iraqi forces and supporting its raids against Islamic State remnants. Furthermore, ISIS is still a serious threat in Iraq and has killed several members of the Shammar tribe on June 19 and has destabilized parts of Kirkuk province in recent months.

The airstrike also puts Iraq and the coalition in a bind and sheds light on the influence of Iranian-backed militias across Iraq and Syria. Israel’s Prime Minister Benjamin Netanyahu spoke to U.S. Secretary of State Mike Pompeo and Russian President Vladimir Putin forty-eight hours before the airstrike and warned that Israel would strike Iran throughout Syria. Israel has carried out more than one hundred airstrikes in Syria. Over the last year, these strikes have grown more elaborate as tensions rose amid Israel’s warning that Iran—and Shia militias that it backs—are entrenching themselves. Yet Iran shows no sign of leaving Syria, which it considers a close ally.

After Washington withdrew from the Iran deal, it began to express more full-throated support for Israel's view of the Iranian threat in Syria and also skepticism over the role of Iranian-backed militias in Iraq. Pompeo said in May that “in Iraq, Iran sponsored Shia militia groups and terrorists to infiltrate and undermine the Iraqi Security Forces and jeopardize Iraq’s sovereignty.” Former Secretary of State Rex Tillerson voiced similar concerns in October 2017 when he called for the militias to “go home.” In response, Iraqi Prime Minister Haider al-Abadi said the PMU fighters “should be encouraged because they will be the hope of the country and the region.”

Iraq presents these militias as an increasingly official paramilitary group affiliated with the Interior Ministry, based on a 2016 law passed in Baghdad. However, Washington sees them as descendants of terror groups who fought and killed Americans after 2004. Ostensibly the PMU grew out of a fatwa by Grand Ayatollah Ali al-Sistani to fight Islamic State in June 2014, when the extremists threatened Baghdad. But it was made up of existing groups. Kata'ib Hezbollah, the unit that the airstrike targeted in Syria, was designated a terror organization by the United States in 2009. “KH has ideological ties to Lebanese Hezbollah and may have received support from that group. KH gained notoriety in 2007 with attacks on U.S. and coalition forces,” the State Department noted. Kata’ib Hezbollah leader Abu Mahdi al-Muhandis not only fought against America but once served alongside the Islamic Revolutionary Guard Corps in Iran in the 1980s. Similarly, Qais Khazali, once a U.S. detainee at Camp Cropper, became a PMU leader in 2014 and his Asaib Ahl al-Haq militia is influential in Iraq. Moreover, both of these leaders have called on the United States to leave Iraq.

The PMU, and its involvement in Syria, put U.S. policy in Iraq in jeopardy. In December 2017 an inspector general report for the Department of Defense alleged that the PMU had obtained nine M1 Abrams Tanks that were supposed to be in the hands of the Iraqi army. Kata’ib Hezbollah was one of the units that were photographed with a U.S. tank during the war on ISIS.

As the conventional ground campaign against ISIS wrapped up in the fall of 2017, PMU units began crossing into Syria to aid the Syrian regime. For these groups, whose ideological roots are in the Islamic revolution in Iran, support of Syria's Bashar al-Assad Assad or Lebanese Hezbollah is natural. For instance, Qasem Soleimani, the IRGC Quds Force commander has been photographed in Syria with the Iraqi militias. Furthermore, PMU leaders also began traveling to the Lebanese border with Israel to stand with Hezbollah in late 2017 and early 2018.

Now the militias have run afoul of Israel's growing attempt to prevent Iran's entrenchment in Syria. Jerusalem seeks to prevent Iran from gaining a "road to the sea.” Although the full details of Israel’s airstrikes in Syria have not been disclosed, reports indicate that it carried out more than one hundred airstrikes through the summer of 2017, many of them allegedly targeting arms transfers to Hezbollah or individual threats. Israel began warning about permanent Iranian bases in 2017, and several were hit with airstrikes. Then, after an Iranian drone flew into Israeli airspace in February, Israel began deeper retaliation. For example, Israel hit the T4 airbase in Homs province in April. Since then, Syria initially tried to blame some of these attacks on the United States. In early May Israel struck numerous Iranian-affiliated targets in Syria in response to a barrage of Iranian rockets fired at the Golan. In late May Assad said there were no Irania troops in Syria, in an apparent attempt to send a message to Washington and Jerusalem. Assad’s rhetoric was mostly semantics though because the Iranian presence in Syria is multi-faceted and consists of militias, agents, and infrastructure.

Kata’ib Hezbollah is one example of that. It is not “Iranian,” it is Iraqi. After the airstrike, Iraq’s Joint Operations Command sought to distance itself from the units across the border, claiming to local Arabic media that they were not official forces. Iraq’s Foreign Ministry condemned the airstrike but did not suggest a culprit. Meanwhile, Al-Ghad, an Arabic media outlet located in Jordan, claimed that Kata’ib Hezbollah vowed to defend itself in Syria with surface to air missiles.

The message sent to Iraq and Syria with the airstrike is that the presence of the militias is not acceptable and that they are being watched. The larger strategic picture is not just about the border area, but also about Assad’s moves in southern Syria. The Syrian regime is seeking to defeat the Syrian rebels in southern Syria near Jordan after seven years of civil war. Netanyahu spoke with Putin in mid-June and expressed concern about any Iranian or Shia militia attempt to use the regime’s offensive to gain a foothold in southern Syria near Israel’s Golan border. Netanyahu’s comments about striking Iranian forces anywhere in Syria come in that context. Israel wants the Iranian presence removed from Syria before the Syrian regime consolidates its control in the south. This is because Iran and its allies in Syria had come to help Damascus fight the Syrian rebels, but Israel does not want a post-Syrian civil war situation in which Iran has benefited from the power vacuum and established itself near Israel’s border.

Israel has reached out to Washington and Moscow on this issue. Putin has indicated that “foreign forces” should leave Syria as the conflict winds down. This could be interpreted to mean Iranian forces, but Moscow has not been clear in its language because it knows it cannot order Iran out of Syria. Moscow is also a player in southern Syria and the Euphrates valley—the strategic areas that concern Jerusalem. Moscow, Washington and Amman signed a ceasefire regarding southern Syria in July 2017. Russian contractors were involved in a pro-regime attack on U.S. coalition partners in February this year near Deir ez-Zor, and the coalition responded with airstrikes, allegedly killing Russians.

The mid-June airstrike sends a message to Tehran. It illustrates a new strategic paradigm that involves both the United States and Russia in Syria. As the administration works to confront Iran, this may be one of the first examples of a Jerusalem-Washington policy that leverages Israel's concerns. It also sheds light on attempts to interdict Iran's corridor of influence from Baghdad to Damascus. However, it also has wider ramifications for Baghdad and the Syrian regime offensive in southern Syria. Washington must decide if it is serious about rolling back Iranian influence in Syria or if it will continue to watch as Jerusalem acts.

Seth J. Frantzman is a Jerusalem-based journalist who holds a Ph.D. from The Hebrew University of Jerusalem.