What Pakistan Will Gain from Peace in Afghanistan 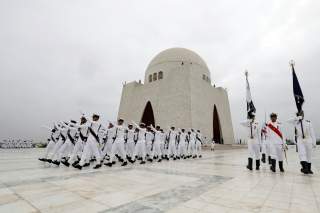 Pakistan’s expectations of substantial improvements in its security and trade relations with Afghanistan—and by extension with the United States—appear to be thin on the ground.

Paring the trust deficit down with Kabul is the foremost diplomatic challenge for Islamabad. There are two major irritants in Pak-Afghan ties: Pakistan’s diplomatic support to the Taliban, the insurgents whom the Afghan army is fighting; and Pakistan’s refusal to grant transit access to Indian goods destined for Afghan markets. Even as the former irritant seems to be settled down by the ongoing reconciliation process, the latter challenge will continue to take hold of Pakistan’s trade with Afghanistan in the times to come.

First, the Taliban nuisance. After Pakistan’s seriousness in facilitating the Afghanistan peace process, the perceptions in Kabul’s policy circles appears to be changing. The Afghan president’s special envoy and the chief of High Peace Council (HPC) Umar Daudzai visited Islamabad recently and appreciated the current government’s efforts for Afghanistan.

He also highlighted the potential of the Afghanistan-Pakistan Action Plan for Peace and Solidarity (APAPPS) in increasing bilateral trade and enhancing cultural exchange visits and people-to-people contacts. Under that framework, in June 2018, both the Afghanistan and Pakistan governments also agreed to establish liaison offices in each other’s military headquarters, ground coordination centers for better military coordination, and intelligence-sharing on cross-border flow of terrorists and drug-traffickers.

However, Islamabad must remember that the attitude change in the Afghan government is the result of goodwill created by making serious efforts to secure peace in the country.

In order to sustain the geniality in the ties with Kabul government, Islamabad needs to pursue amicable relations across the board, i.e., showing no preference for any side in Afghanistan. It must note that seeking stability in Afghanistan through facilitating the intra-Afghan peace process is only one way. Other ways to be pursued in tandem may be: easing the visa regime, promoting Pashto music/dramas/movies/entertainment shows, medical tourism and cultural exchange programs.

Unfortunately, in the last couple of years, Pakistan witnessed a sharp decline in trade with Afghanistan. This is because of the second irritant in the relationship: the India factor.

Previously, on many occasions, the Afghan government threatened to close down transit routes for Pakistan’s goods destined for Central Asian markets if Pakistan did not allow transit access to Indian goods destined for Afghanistan. Pakistani policymakers took so long to take firm action on this issue that Afghan and Indian businesses shifted the transit of trade through the port of Tehran.

The consequences proved terrible for the Pakistani economy. It was reported last year that the Afghan government shifted over 70 percent of its trade to Iran, India and China. Pakistan lost more than a 50 percent share in the Afghan market in the last two years, ceding the traditional markets of flour, women & men apparel and red meat to India and China. Thus, the Pak-Afghan trade was reduced from $2.7 billion in 2015 to $1.7 billion n 2017.

This is alarming for Pakistani businesses, as it signifies Kabul’s reduced dependence on Pakistani ports. Other reasons for the lowered trade included strict visa policy regime, a stern border security process, regulatory duty on imports from Afghanistan, and so forth.

In this context, the question of granting transit access to India also appears to have lost its merit. In the coming months, therefore, one of the biggest challenges for Islamabad will be to increase its trade volume with Afghanistan, especially since the latter no longer relies on Pakistani ports.

The next issue is Pakistan’s access to Central Asian markets through Afghanistan and vice versa. At one point, Pakistan had the opportunity to offer Afghanistan a transit corridor for its goods to India (and potentially vice-versa). This has ceased to be the case now, as mentioned above.

In the future, Pakistan’s trade with Central Asia will likely be contingent upon the favorable ties with Afghanistan. That congenial factor is Pakistan’s sincerity in ensuring peace in Afghanistan through convincing the Taliban for talks with the Afghan government or the High Peace Council.

Islamabad also expects that, even when U.S. troops withdraw and law and order get out of hand in Afghanistan, its border-fencing will stop cross-border terrorism and the uncontrolled movement of people towards Pakistan. Pakistan’s army recently claimed to have completed a 900 km-long border wall with Afghanistan, while the remainder of the total 2,600 km will be completed this year. Deployment of troops will also complement the border-security management process.

Although these measures may check the cross-border flow of terrorists, they will also obstruct the conventional inter-cultural exchanges of people on both sides of the border. Moreover, the Kabul government has never recognized the border with Islamabad and continues to oppose the wall, which manifested itself in the cross-border skirmishes between the two armies. Thus, whether peace is restored in Afghanistan or not, the Afghan government will continue to oppose the wall and the Pakistani government may lose goodwill among the Afghan populace.

Therefore, Islamabad needs to ensure that some border crossing points remain open and regularized to facilitate people-to-people contacts, trade and cultural exchanges. For this, the current government’s initiative to keep the Torkham border open is an encouraging step.

Recently, U.S. Senator Lindsay Graham, during his visit to Islamabad, talked of urging the Trump administration to sign free trade agreement with Pakistan in exchange for its help in Afghanistan. In his view, the economic engagement would markedly transform the nature of bilateral ties from the transactional to one of strategic.

These claims are only his expectations rather than a policy. It is not something to count on.

Frankly speaking, Washington and Islamabad share no common enemy and their interests diverge on the United States’ strategic rival—China. Still, if Pakistan pursues balance in its relations with major powers and seeks its national interest instead of being party to either side, it could attain the best of both worlds. Nonetheless, for a strategic partnership, both money and the addressable market play an important role. By having money in the bank and offering substantial market opportunities, Pakistan will be able to bolster its relationship not only with the United States, but also with all major powers in the world. In the short run, that doesn’t seem to be the case in Pakistan.

Here’s the good news. After nine years, ExxonMobil, a large American oil & gas firm, along with the Italian company Eni Pakistan Limited and two Pakistani firms, have started an exploration of oil and gas reservoirs near the Karachi coast. Cargill, another U.S. company and a well-known food and agriculture producer, which looks forward to investing $200 million in the Pakistan’s agriculture and dairy industry.

Whether these developments will also lead to a resumption of the United States’ military sales, military training program, and soft diplomacy in general is yet to be seen. For now, it looks more likely contingent upon Afghan peace.

In the ultimate analysis, the current government’s pursuit of friendly relations with all neighbors, a nonaligned approach in interstate relations and a constructive role in regional stability will help the country meet its expectations from the ongoing Afghan peace process.

Riaz Khokhar is a research assistant at the Center for International Strategic Studies (CISS), Islamabad. His areas of interest are Pakistan's foreign policy and South Asian strategic affairs. He can be reached at [email protected], or Twitter @Riaz1Khokhar.