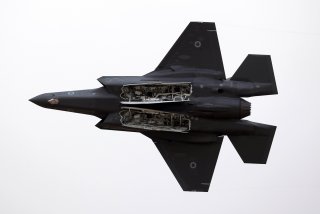 This week Congress will vote on the Trump administration’s proposal to sell the United Arab Emirates (UAE) highly advanced F-35 combat aircraft. We are leaders of the Jewish Institute for National Security of America (JINSA), an organization which fervently believes a strong Israel is vital to American national security, and we consider on balance the sale merits proceeding.

There are legitimate concerns about this sale. Foremost among them is the threat it could pose to Israel’s qualitative military edge (QME).

Israel’s defense establishment reportedly was very concerned when learning that America committed to sell the UAE F-35s as part of the historic UAE-Israel normalization and peace agreement, known as the Abraham Accords. Indeed, since 2016, Israel has been the only Middle Eastern country with F-35 jets, according it certain operational advantages. Israeli defense officials also worried that, if the UAE received permission to purchase F-35 jets, it would snowball, and other countries would demand them, and maybe receive them, too. Qatar has already asked for them, and Saudi Arabia can be expected to as well, especially if they pursue normalization with Israel.

Further, this UAE sale follows hundreds of billions of dollars in advanced weapons sales to the region over the past decade, along with Turkish and Iranian arms buildups. Accumulatively, this creates concern for Israeli military planners.

Adding to Israeli anxiety is that, while the UAE is a moderate country posing no threat to Israel today and a stalwart American ally which has fought alongside American forces against the Islamic State and other adversaries, the Middle Eastern region has a history of today’s friend becoming tomorrow’s foe. Such was the case with Iran, which was one of Israel’s and America’s closest allies in the 1970s before the Islamic Revolution of 1979 transformed it into their most ardent enemies. Turkey was a close partner of Israel in the 1990s and now acts as an antagonist.

The U.S. government evidently takes these concerns seriously, as it is legally obligated to uphold Israel’s QME, which is commonly understood to mean sustained Israeli military superiority, including considering the impact of U.S. regional arms sales on Israel’s security. Then-Defense Secretary Mark Esper met Israeli Defense Minister Benny Gantz twice in the Pentagon in the fall and worked out a secret agreement to uphold Israel’s QME.

This prompted the Israeli government not to oppose the sale of the F-35 jets. In fact, Israeli prime minister Benjamin Netanyahu and his political opponent Defense Minister Benny Gantz issued an extremely rare joint statement noting that “The Prime Minister and the Defense Minister both agree that since the US is upgrading Israel’s military capability and is maintaining Israel’s qualitative military edge, Israel will not oppose the sale of these systems to the UAE.”

Israel’s Ambassador Ron Dermer asserted that Netanyahu and Gantz “don’t agree on a lot of things within Israel” but agreed that the sale “would not violate the U.S. commitment to maintaining Israel’s qualitative military edge, and we feel very confident about that.”

While these statements stand on their own, it’s also notable that it could take six years to deliver the planes, offering time for Washington to veto delivery if the UAE’s political order or foreign policies become antithetical to the United States, just as it recently stopped delivery of F-35s to Turkey following the latter’s purchase of Russian S-400 air defenses. This is an unlikely scenario given the UAE’s historic stability and moderation, and having never fought with Israel in its fifty-year history.

Israel’s apprehension about setting a precedent is legitimate. However, the U.S. government doesn’t have to oblige future requests for the F-35 jet and undoubtedly would be attentive to Israel’s view of them. For instance, Egypt for years has wanted F-15 jets, which Israel and the Saudis have had for decades, but the United States has declined to sell them, despite Egypt’s longstanding peace agreement with Israel.

Some Americans are worried whether the UAE government can ensure security for the F-35 jets, amid the Russian and Chinese presence in that country. However, U.S. Air Force F-35 jets have been based in the UAE with seemingly little incident. U.S. officials will need to feel comfortable with UAE security of the F-35 jets before delivering the stealth aircraft, but we believe any concerns can be addressed.

Selling F-35 jets to the UAE might also offer the United States some strategic advantages. As America retrenches from the Middle East, it is important for it to equip its allies sufficiently so they can advance common interests. Selling F-35 jets to the UAE would certainly give Iran pause, and send a strong signal to Turkey, a UAE nemesis, of American opposition to its growing regional aggression.

Perhaps the most important reason to sell F-35 jets to the UAE is that it’s in the vital interest of America and Israel that the Abraham Accords remain successful and that they are widely seen as such. So far, they have been. Indeed, while the cultural, medical, economic and strategic benefits accruing to the UAE from the agreement are enormous, what has stood out has been the incredibly warm, overwhelming enthusiasm for it by the UAE. It has stunned many Israelis and many American observers accustomed to the far colder stance maintained by Israel’s other Arab peace partners, Egypt and Jordan. A messy Congressional fight, especially one that requires a presidential veto, could lead the Emiratis to cool their enthusiasm and ties with Israel and discourage other countries from making peace with the Jewish state. This would amount to a huge missed opportunity for Israel, America and the region.

Since this sale is likely to proceed—given insufficient opposition in the Senate to override a Trump veto of a resolution of disapproval—it might be best for Congress and the incoming Biden administration to focus greater attention on ensuring America upholds Israel’s QME, even beyond what then-Secretary of Defense Mark Esper might have committed to Gantz in October.

JINSA has proposed multiple, mutually reinforcing ways to do just that. First, accelerate weapons delivery to Israel under the current, Obama-signed MOU for defense assistance, which would not cost American taxpayers one extra dollar. Second, upgrade America’s arms stockpile in Israel with precision-guided munitions that Israel would need for a major war with Iran and Hezbollah, and which U.S. forces could also use regionally. Third, increase sharing with Israel of relevant signals intelligence and lower classification barriers to the mutually-beneficial bilateral sharing of certain intelligence, such as weapons and technologies, including radar and early-warning capabilities. Fourth, develop with Israel more coherent, integrated plans for joint research and development of next-generation defense technologies, and integrate them in both countries’ arsenals. Together, these steps and others will support QME by building sustained, cumulative strategic superiority for Israel over potential adversaries.

And if Congress wishes to spend extra on QME, then it and the incoming Biden administration could build on Barack Obama’s memorandum of understanding of defense assistance to Israel by augmenting the $500 million per year allocation on missile defense.

The sale of F-35 jets, like foreign policy in general, is complicated, especially for those who believe in a strong Israel and a robust U.S.-Israel security relationship. In retrospect, it might not have been the best choice to effectively append the F-35 jets to the Abraham Accords, but appended they are.

Every opportunity offers risks, but on balance we prefer investing in the success of the Abraham Accords with some number of UAE F-35 jets and upgrading Israel’s QME rather than risk scuttling the burgeoning Middle Eastern peace. Congress and the incoming Biden administration should make the same choice.

Michael Makovsky, a former Pentagon official, is President and CEO of the Jewish Institute for National Security of America (JINSA). Gen. (ret.) Charles Wald, former Deputy Commander of U.S. European Command, is a Distinguished Fellow at JINSA’s Gemunder Center for Defense and Strategy.