What Is Turkey Doing in Northern Iraq? 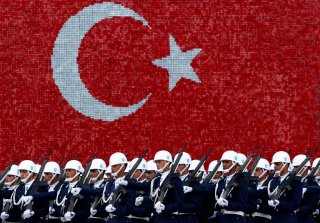 Over the summer, the Turkish Air Force conducted one of its largest air campaigns in recent years against the Kurdistan Workers Party (PKK), a State Department-designated terror organization. Operation Claw-Eagle, which began in mid-June, struck more than eighty targets that spanned from Iraq’s Syria border to Iran border, some two hundred miles in the east-west direction. The Turkish Armed Forces said it launched the campaign due to “the increased PKK attacks on Turkey’s observation points in North Iraq.” However, the military operation should be seen as a part of Turkey’s current wider Middle East and the Mediterranean policies also signaling the level of Turkey’s military and intelligence readiness to conduct those policies.

With the collapse of the “Peace Process” in mid-2015 and the resumption of PKK attacks, Ankara commenced a comprehensive action plan to eradicate the organization. To this end, the Turkish Armed Forces (TAF) began taking steps to move the line of contact from within Turkey’s southeastern provinces into northern Iraq, where the PKK has a dozen training camps scattered in formidable mountains. In order to create a buffer zone south of the Turkish-Iraqi border, TAF built thirteen heavily reinforced permanent military bases and asphalt roads to be able to move heavy equipment and armored vehicles to those bases.

A further blow to the PKK came with the restructuring of the Turkish Intelligence Agency (MIT) under Hakan Fidan. MIT established a headquarters in Erbil, the capital of the Kurdish Regional Government (KRG), where it gathers and processes intelligence regarding the PKK activities. Such Turkish security apparatuses as intelligence, military, and police would in the past suffer greatly from a lack of coordination because each would answer to different state representatives rendering the intelligence processing very inefficient. As Turkey shifted to a presidential system in 2018, the ability of those security institutions to coordinate grew exponentially. By a presidential decree, MIT came under the direct jurisdiction of the president allowing it to acquire authorization to conduct operations beyond Turkey’s borders. This harmonization has been proven effective. Turkey began to neutralize top PKK executive cadres not only deep inside northern Iraq, particularly in the famous PKK headquarters at the Qandil Mountains, but also in northern Syria, where PKK’s offshoot, the YPG, (the People’s Protection Unit) aims to create autonomy. The combination of intelligence gathering, the ability of unmanned aircraft to pinpoint and the use of Air Force have resulted in the killing of prominent PKK executive council members such as Guluzar Tural, Nazife Bilen, Riza Altun, Ismail Ozden, Ali Aktas, Garip Muhammed, Mikail Ozdemir, severely crippling the organization’s decisionmaking process. In an unprecedented move, on May 27, Turkish F16s killed Kasim Engin, the PKK Central Committee member, in the Asos region, some 111 miles south of Mt. Qandil. What makes this assassination unique is that it not only reveals that Turkey’s military operations have been pushing the PKK top echelon deeper south away from the Turkish border. Turkey has also begun hitting targets within the area controlled by the Patriotic Union of Kurdistan (PUK) of the Talabani clan. PUK is known to display a hostile attitude towards Barzani’s Kurdistan Democratic Party (KDP). This brings us to how the regional dynamics have helped Turkey come closer to defeating the PKK.

Of the two main components of the Kurdistan Regional Government of Iraq, the KDP has had close relations with Turkey in the last three decades; whereas its rival PUK has fomented a de-facto alliance with the PKK and Iran. The president of the Kurdish Regional Government and the head of KDP, Nachirvan Barzani denounced PKK’s presence in Iraq as “illegitimate.” This intra-Kurdish schism and the threat of PKK for the Barzani have greatly allowed Turkey to collaborate with the KDP particularly in establishing an elaborate network of intelligence gathering in north Iraq.

Besides the Kurdish Regional Government, Turkey has received the support from the Iraqi government under the new prime minister Mustafa Al-Kadhimi. Al-Kadhimi is known for his distaste of the Iranian influence in his country. In what is coined as “show of force” against Iran, the very next week after coming to power in May, the Al-Kadhimi government arrested the pro-Iranian Thaer Allah militants who had shot protesters in the southern oil-rich Basra. Working with Turkey, he saw this as an opportunity to reduce the Iranian influence in Iraq and increase trade to offset the failing Iraqi economy, Al-Kadhimi has turned out to be an instrumental partner for Ankara’s war against the PKK. On June 12, three days before Turkey’s recent Operation Claw-Eagle began, Turkey’s intelligence chief Hakan Fidan paid a secret visit to Baghdad.

While Turkey’s ever-soaring indigenous defense technology, particularly unmanned aircraft, high level of inter-institutional coordination in Ankara, as well as support from the local jurisdictions in Iraq have facilitated the containment of PKK, it is only a part of Turkey’s regional chess game.

Many in Ankara are convinced that the United States has been working to unite the Syrian and Iraqi Kurds under the PKK umbrella forming an independent hostile state across its southern border spanning from Iran to the Mediterranean Sea. Therefore, Turkey does not distinguish between the People’s Protection Units (YPG) in Syria and the PKK, treating them as the same. Alarmed by the rapid YPG territorial gains in Syria in 2015 and the declaration of autonomy, Turkey launched three cross border operations which ultimately dislodged YPG and pushed it farther south. In this regard, Operation Claw-Eagle also aims to disrupt the creation of such an entity mainly by hindering the flow of militia and weaponry from north Iraq to the Syrian YPG.

The Turkish jets, among the many targets, struck the PKK’s training camp in Sinjar, a strategically located town on the Syria-Iraq border. The PKK, by opening a trade route between Qandil and YPG, sees Sinjar as the location with the potential to break the KDP-Turkey encirclement in Syria and Iraq. It must be noted that the Iranian proxy Popular Mobilization Forces (PMU) also called in Arabic, “al-Ḥashd ash-Shaʿbi,” effectively controls the Sinjar region indicating PKK-Iran cooperation. For Iran, Sinjar is an important part of the weapon and militia pipeline between Tehran and its proxies in Syria and Lebanon. Brian Hook, the current U.S. Special Representative for Iran, stated, “Credible reports indicate that Iran is transferring ballistic missiles to Shia militia groups in Iraq.” Paul Davis, a former Pentagon analyst and now a senior fellow at Soran University explained that “with its proxies controlling the Sinjar region, Iran gains options and flexibility. The control of such strategic territory increases the lethality and range of missiles,” adding that “U.S. military bases in the region could also be the target of such attacks.”

Iran has always been a sore spot in Turkey’s fight against the PKK with its ambiguity for cooperation. Turkey’s interior minister Suleyman Soylu said that “around one hundred PKK terrorists are in Iran's Dambat, near Turkey, which constitutes a real danger.” Thus, Operation Claw-Eagle constitutes a message for Iran.

Ultimately, Operation Claw-Eagle should be seen as an indication that the Turkish Military has reached a point where it could send fleets of F16s over Libya, perform numerous naval large scale drills in the Mediterranean, while at the same time conducting a series of massive air and ground campaigns against the PKK in large swathes of northern Iraq. This is a clear message to the anti-Turkey block of countries (France, Greece, United Arab Emirates and Egypt) in the Eastern Mediterranean. With this overall momentum in Turkey, we should expect a more assertive Turkish presence in Libya, Iraq, and Syria. The scope of Turkey’s exertion will be greatly determined by how Ankara handles Moscow and Washington.

Ali Demirdas, Ph.D. in political science from the University of South Carolina, is a former Fulbright scholar, professor of international affairs at the College of Charleston (2011–2018). You can follow him on Twitter: @demirdasPhD.