Why America Has Misdiagnosed Russia’s Role in Syria 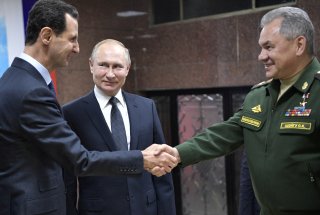 Makhlouf had been a pillar of support for the Syrian regime, especially when the regime’s overall situation during the initial phases of the civil war was precarious. He established a charity, Jam’iyat al-Bustan and attached to it a militia whose number grew to thirty thousand. In return, Assad granted him important government contracts and concessions. Makhlouf was entrusted with securing some of Syria’s important oil and gas fields, including the Hayan Gas factory. Among other concessions, Makhlouf’s company Syriatel monopolized he country’s communications. His wealth grew exponentially catapulting him to become the ill-reputed richest man in Syria. But his rise as an untouchable and an equal to Assad, coupled with his huge appetite for illicit profiteering, was frowned upon by none other than the royal family and its underlings. Not only did Makhlouf fail to secure Syria’s oil and gas fields but also he failed to pay his fair dues in taxes to the regime. Whereas Assad felt both uneasy with Makhlouf’s powerful image and cheated by Makhlouf’s pitiful remuneration, Assad’s wife Asma and sister Bushra were furious with his family’s extravagant lifestyle at a time many Syrians have been living below the poverty level and for monopolizing Syria’s most rewarding contracts. Makhlouf’s children have unreservedly splashed their fortune and propagandized their expensive cars and jets.

As a result, Assad began clipping the wings of Makhlouf in 2019 before Russian media published its critical reports on Assad. In fact, the coincidental timing of the release of Makhlouf’s videos on the heels of the publication of Russian reports is more about Makhlouf’s grievances with and fallout with Assad. The idea that Makhlouf is, as Hodge posits, Russia’s man and his clan, unlike other Alawi clans and militia, is rooting for Russia is a naïve understanding of the Alawi clans and especially of Russia’s treatment of corrupt and mafia-like entities.

What’s happening in Syria today is an attempt, pushed by none other than Putin himself, to clamp down on all Mafia-like figures in Syria who operate outside the purview of the state, thereby handicapping the Syrian economy. This has been amply corroborated by Aleksander Aksenenok of Russia International Affairs Council:

The economic challenges now faced by Syria are even more serious than during the active phase of hostilities . . . it is becoming increasingly obvious that the regime is reluctant or unable to develop a system of government that can mitigate corruption and crime and go from a military economy to normal trade and economic relations.

To be sure, Putin is more or less replicating his policy vis a vis the Russian vory [Russian Mafia] in Syria in order to establish an economically viable state. Therefore, he has been unhappy with Assad’s militia leaders and other powerful corrupt businessmen and criminals who have run afoul of the state. They have created a loose criminal organization virtually more moneyed than the state and as influential as the state. Makhlouf was at the center of this Mafia enterprise. Putin pressed Assad to both stop tolerating overt or implicit challenges to the state and to allow these mafia members to operate only in so far they accepted the state’s overall political and economic control and enriched its coffers. Anyone who is intimate with Putin’s relationship with the vory v Zakone [thieves-in-law] could safely argue that Putin is pressuring Assad to mold Syria’s loose Mafia enterprise into a state-controlled organized crime, corporately minded and affiliated with certain elements of the state. In this respect, as Aiman Mansour, an astute Israeli scholar, observed Assad’s move against Makhlouf was in step with his other moves against similar businessmen, like the Jaber brothers and Muhammad al-Qatarji.

Putin knows neither he nor Assad can stamp out corruption in Syria. Putin ascribes to the Russian proverb: “The wolf may lose his pelt, but never his nature.” As such, his unhappiness with Assad is more about his thus far inability to tame the Syrian vory!

Considering all of this, Washington’s misreading of both Russian policy in the Middle East in general and Syria in particular and Syria’s palace dynamics is a recipe for other serious blunders. If these egocentric and haphazard views of Russian policy in Syria become the drivers of American foreign policy, then one should not be surprised if Russia (potentially supported by China) supplants Iran as the leader of the anti-American “Resistance Axis” in the Middle East.

Robert G. Rabil is a professor of political science at Florida Atlantic University. The views expressed in the article are his own. He can be reached @robertgrabil.