Why America Should Keep Supporting the Lebanese Armed Forces 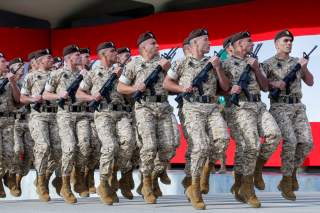 Thanks in no small measure to American political and military support, consecutive Lebanese governments continued to support the Lebanese Armed Forces (LAF), which thus far has tried to remain, as much as possible, impartial to political sectarianism and, under certain circumstances, reserve an independent decision making capacity despite being under civil authority. In fact, the resuscitation of the LAF as a credible domestic force, respected and trusted, unlike other institutions, by most Lebanese has deepened the Hezbollah-LAF nuanced and contradictory relationship.  Largely misunderstood, this relationship has been frowned upon by a number of neoconservatives and their supporters who perceived the LAF as an arm of Hezbollah and therefore have tried to equate Hezbollah with the LAF.

Conversely, the pentagon, American intelligence and the U.S. embassy in Beirut have supported the LAF as a force of stability and an ally against terrorism. Separate U.S. state department classified dispatches in 2008 made public by Wikileaks uncovered a secret operation Cedar Sweep, whereby American military flew planes over Lebanon in 2008 to identify Hezbollah positions. They also revealed that Defense Minister Michel Murr had given American diplomats advice to pass on to Israel so as to help the latter attack Hezbollah while keeping the LAF uninvolved. It’s noteworthy that the leak of American classified cables and dispatches have put anti-Hezbollah leaders on the defensive and made some of them target for assassination.

This secret cooperation with the U.S. military shored up Hezbollah’s decision to seize Beirut in May 2008 when the Islamist party felt that its security had been compromised by the Lebanese government. The LAF, broadly speaking, did not intervene until the fighting was almost over. Then Commander of the Army Michel Sleiman defended his position by stating that “the events in Beirut and throughout the country represented a real civil war that no national army in the world can confront.”

The events in Summer 2008 highlighted the Hezbollah-LAF nuanced and difficult relationship. On the one hand, Hezbollah represents the Shi’a community in consociational Lebanon that the LAF’s mission is to secure irrespective of sect; on the other, the LAF faces in Hezbollah a strong force threatening the cohesion of the country and by extension that of the army. No doubt, the events of 2006, 2007 and 2008 put in sharp relief the necessity to build up the LAF into a modern, capable force while deeply ingraining its esprit de corps as a shield for its cohesion. Consecutive governments, supported by the United States, have pursued this national goal that more or less transcended political sectarianism. Nevertheless, it would be naïve to suggest that political sectarianism following the eruption of Syrian civil war in 2011 has not affected the LAF-Hezbollah relationship.

In fact, the Syrian civil war has had serious security ramifications for Lebanon. Notwithstanding the influx of approximately 1.5 million Syrian refugees into Lebanon, Al Qaeda affiliate Jabhat al-Nusra (currently branded Hay’at Tahrir al-Sham) and the Islamic State set up secret cells in Tripoli and along the Lebanon-Syria border and seized the northeastern border town of Arsal and its hills. Rising up to the challenge, the LAF, headed by a Christian, supported by Internal Security Forces, headed by a Sunni, and the General Directorate of Security, headed by a Shi’a, devised a comprehensive security plan to address the growing jihadi threat, which included creating an Islamic Emirate in Tripoli. In spring 2014, two thousand soldiers raided a number of neighborhoods in Tripoli and arrested dozens of Salafi-jihadis. At the same time, the LAF set up checkpoints along the border with Syria and around Arsal and its surroundings. No less significant, the LAF reinforced its military and intelligence efforts to deny Al Qaeda and the Islamic State a safe haven in the over-crowded Palestinian refugee camps. Needless to say, Lebanon, whose population is 4.5 million, is the host of over 1.6 million Syrian and Palestinian refugees. The LAF has played a key role not only in stabilizing the refugee camps but also preventing Al Qaeda and the Islamic State from setting up emirates in the country.

In 2017, the LAF devised a military plan, Dawn of the Hills, to defeat the Islamic State in Arsal and its hills. The brilliant and meticulous execution of the plan illustrated the professionalism and enhanced analytical and fighting capability of the LAF, which was celebrated by the country’s sects and most cross-sectarian leaders. However, this successful military campaign was at the last minute contested by Hezbollah’s unilateral agreement with the Islamic State to withdraw from Lebanon. At the same time, Hezbollah, to the chagrin of the LAF, promoted a narrative of secret cooperation with the LAF as part of its nationalist security equation: The People, Army, and Resistance.  The LAF have frowned on Hezbollah’s unilateral political and security actions, which have engendered virtually a unanimous begrudgement among LAF officers over Hezbollah “holding its rifle” outside the purview of the state.

No doubt, this latest episode has brought to the surface the simmering tension in LAF-Hezbollah relations. But it also underscored the qualitative and quantitative improvement of the LAF as a fighting force and a force of stability in a country beset by a weak national identity, political sectarianism, endemic corruption, and regional tribulations. Commenting on the LAF and its nuanced and contradictory relationship with Hezbollah, former U.S. Ambassador to Lebanon Jeffrey Feltman wrote:

The Lebanese Armed Forces (LAF), while devoid of the offensive rockets and missiles of Hezbollah, are an increasingly coherent and sophisticated military defense force, thanks in large measure to years of patient U.S. support. In light of the LAF’s improved capacities, Nasrallah’s arguments that Hezbollah is needed to defend Lebanon begin to sound increasingly hollow, especially when, as with the tunnels and in 2006, Hezbollah is the party most responsible for placing Lebanon in danger of a catastrophic war.

But this complementary view of the LAF, shared almost universally by American Military and Intelligence, has come under significant censure by some neoconservatives and diplomats worried about Hezbollah’s alliance with Iran and its ramifications for the region at a time the Trump administration is pursuing a “maximum pressure” policy on Tehran. This attitudinal development gained traction following Israel’s Operation Northern Shield in December 2018, which discovered tunnels that Hezbollah had excavated from Lebanese territory into Israeli territory, apparently to be used in a Hezbollah future offensive against northern Israel. This discovery bolstered Israeli accusations that the LAF (as well as UNIFIL) has forsaken its role under UNSCR 1701, which ended the 2006 War, as the only legitimate force in southern Lebanon by allowing Hezbollah to build an offensive military infrastructure in southern Lebanon.

This only whetted the appetite of some far right analysts and neoconservatives in Washington to pair Hezbollah with LAF. Lebanon is Hezbollah and Hezbollah is the LAF. They argued that Lebanon has fully fallen under the control of Iran and Hezbollah and that the LAF has become in essence an arm of Hezbollah. Therefore, they asserted that American military support of the LAF is woefully misguided and should be stopped.

Admittedly, some concerns aired by Israel and U.S. diplomats are legitimate and need to be taken under consideration when the U.S. government apportions its military support to Lebanon. In fact, there’s a bill under the name “Countering Hizballah in Lebanon’s Military Act of 2019” was introduced to Congress to address some concerns about the LAF’s relationship with Hezbollah. The bill calls on the U.S. president to submit a report to Congress certifying that the LAF has taken serious steps to both limit the influence or expel members of the LAF who are close to Hezbollah and to demonstrate its commitment under UNSCR 1701. Unless the president waives this certification on national security grounds, Congress will restrict U.S. military support of the LAF by 20 percent.

Whereas this bill attempts to tackle carefully raised concerns about the LAF’s relationship with Hezbollah, the effort to pair Hezbollah with the LAF is reckless, irresponsible, and dismissive of both the reality of Lebanon as a confessional country and the reality and mission of the LAF. Most importantly, this effort is indifferent to Lebanon’s stability, apparently guided by political and security considerations solely related to Iran, oversimplifying the domestic and regional challenges confronting Lebanon. Prime Minister Saad Hariri conceded that “Hezbollah is a regional problem.”  No doubt, there may be few officers who support Hezbollah on ideological and/or sectarian grounds; but most officers and rank and file members of the LAF are proud Lebanese serving the security and stability of the nation irrespective of sect and independent from regional intervention.

The recent ongoing cross-sectarian protests sweeping Lebanon against the institutional pauperization of the masses, endemic corruption, and the political elite, including Hezbollah leadership, have reinforced the importance, impartiality and patriotism of the LAF. The popular “Thawra” [Revolution] has wide sympathy among the leadership and rank and file of the LAF. Commander of the Army Joseph Aoun has refused to clear the streets and therefore disperse the protests upon the request of President Michel Aoun and the pro-Hezbollah political camp. In fact, the LAF have protected the protesters from Hezbollah thugs in Beirut’s martyr square, though it stood idly by in some southern majority Shi’a towns. In response, the pro-Hezbollah political camp has relied on certain units in military intelligence to clear the roads along the southern intersectional approach to the capital, leading to violent skirmishes with the protesters and the murder of a Druze activist. These skirmishes not only reinforced the LAF command leadership’s support of the Thawra but also inflamed the passion of retired senior army officers to vocally criticize the political elite, including the pro-Hezbollah leadership, and publicly support the historic cross-sectarian popular revolution.