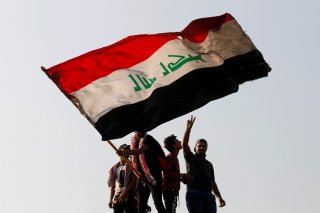 On February 1, Iraqi President Barham Salih joined the secretary-general of the Gulf Cooperation Council (GCC) in Baghdad to discuss joint economic, security, and regional concerns. Secretary-General Nayef Falah al-Hajraf confirmed the GCC’s pledge to support Iraq in its fight against terrorism and its commitment to achieving political stability and sovereignty. Iraqi Prime Minister Mustafa al-Kadhimi also met with the GCC leader and ]outlined the necessity for Baghdad to work with its Gulf neighbors to “combat terrorism and the ongoing campaign to pursue its remnants.”

These remarks follow a pair of suicide bombings that tore through a crowded marketplace in Baghdad on January 21. The blasts killed over thirty people and injured dozens of others, rattling a city that had not experienced a large-scale suicide bombing in more than two years. The resurgence of Islamic State (ISIS) activity reflects Iraq’s current instability. In recent years, Iraq has grappled with economic collapse, political corruption, sectarian conflict, and the spread of coronavirus. Additionally, Iraq’s disordered security forces, muddled by the presence of Iranian-backed militias, have paved the way for the return of extremist attacks.

Iraq has also suffered an unreliable power supply in recent years, contributing to public protests and frustration that the government cannot provide this basic necessity. By 2019, between 30 to 40 percent of Iraq’s energy was acquired from Iranian electricity and natural gas sources. In the last year, Tehran has taken advantage of Iraq’s dependency on various occasions, including slashing its exports in December 2020 from nearly 50 million to 5 million cubic meters.

In addition to combatting terrorism, the GCC-Iraq meeting on February 1 outlined power supply sharing proposals that would help Baghdad obtain a more stable energy source from the Gulf. This is not the first time Iraq and the GCC have worked on strengthening relations. In 2019, Baghdad signed an agreement with the GCC to construct a power line from Kuwait that would import 500 megawatts of electricity.

The signing of the GCC solidarity pact in early January boosted the prospects for power-sharing. The cooperative agreement, brokered by the United States and Kuwait, ended Riyadh’s three-year-long blockade of Doha. This newly unified Gulf front can provide Iraq with the regional allies and energy security it desperately needs. In this week’s meeting in Baghdad, Secretary-General al-Hajraf updated Iraqi officials on progress with the power line first discussed in 2019.

In response to this power-sharing proposal, Iranian-backed groups in Iraq protested Iraqi officials to halt any further collaboration. One militia alleged the GCC is “aiming to destroy what remains of the Iraqi economic security and perpetuate a state of instability in Iraq.” In reality, Tehran’s encroachment on Baghdad’s political, economic, and security spheres is the real roadblock to Iraqi sovereignty.

The restructuring of Gulf relations with Iraq reflects the consequential shifts the Middle East has experienced in recent months. In 2020, Israel normalized relations with four of its Arab neighbors (UAE, Bahrain, Sudan, and Morocco) in the U.S.-brokered Abraham Accords. Similar to the catalyst driving the Gulf solidarity pact, Israel and its neighbors prioritize the same security concern—Iran. As new these regional alliances unfold, Tehran’s spheres of influence will be tested.