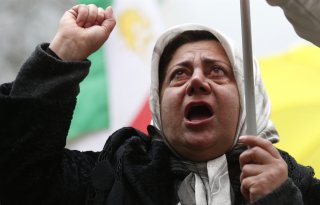 It would be difficult to overstate the dismay I felt when Ebrahim Raisi was inaugurated as the next president of Iran, last month. It was a harsh reminder of seeing him as a member of the “Death Commission” in the 1988 massacre of thirty thousand political prisoners.

Only a few days after his “election” in response to a foreign journalist regarding his role in the extrajudicial executions, he said he was defending human rights and asked to be praised or even rewarded for his service.

I personally bore witness to that massacre when I was about six years into the fifteen-year sentence I received for supporting the Mujahedin-e Khalq (PMOI/MEK) in the aftermath of the 1979 revolution. Many of my friends and fellow prisoners were killed as part of the massacre. Groups after groups of prisoners were executed in the hall at the end of what is called the “death corridor.” One day they took me to that execution hall. The guard took away my blindfolds, and I was horrified to see dozens of lifeless bodies piled on top of one another, with the guards stealing their watches and other valuables. At the end of the hall, twelve ropes hung from the ceiling and wrapped around the neck of twelve blindfolded prisoners standing on stools. As they bravely chanted “death to Khomeini, hail to freedom,” prison guards knocked away the stools; the twelve dangled in the air until they stopped moving. I passed out.

That image will never cease to haunt me. Neither will my recollection of the mounting dread that all political prisoners shared in the weeks leading up to the killings, as we grew increasingly aware of the regime’s resolve to stamp out the MEK in its entirety. The massacre stemmed directly from a fatwa issued by the regime’s first supreme leader, Ruhollah Khomeini, which declared all MEK members to be enemies of God and called upon the judiciary to execute them without mercy or hesitation.

It was that fatwa that led to the creation of the Tehran “death commission,” and this, in turn, revealed the depth of the bloodlust felt by Raisi and other figures who would go on to rise through the ranks of the clerical regime. Before being put forward as the only viable candidate in the June presidential election, Raisi spent more than two years as the head of the judiciary and proved that his bloodlust remains as intense as ever. In that role, he oversaw one of the greatest crackdowns on dissent since the time of the 1988 massacre and directed the judiciary to systematically torture thousands of detainees even after fifteen hundred peaceful protesters had been shot dead in the streets in November 2019.

Insofar as this compounded Raisi’s legacy as the “henchman of 1988,” his response to Iran’s nationwide uprising in November 2019 made it both more predictable and more impressive that the Iranian people would so fully reject his presidential candidacy a year and a half later. Civil unrest in the clerical regime ruling the country has been nearly constant since Raisi took office. Protests have focused on a wide range of specific issues including unpaid wages, blackouts, and water shortages, but growing numbers of them have also condemned the regime in its entirety. In this way, they stand as likely precursors to further mass uprisings like that which took place in November 2019.

The resilience of my fellow inmates was, for me, the defining image of the 1988 massacre. While nothing can diminish the horror of seeing so many innocent men and women executed in groups, the horror cannot erase the inspiration that comes of seeing them go bravely to their deaths, refusing the regime’s demand to renounce the MEK and by chanting slogans like “death to Khomeini” and “long live freedom” all the while, declaring their continued loyalty to the movement for a free Iran.

It is because of this experience that I have no doubt regarding our struggle’s eventual triumph over Iran’s theocratic dictatorship.

Now, I am hopeful that the international community will echo both of these sentiments and follow up on them with serious action. It can do this by launching a long-overdue investigation into the 1988 massacre and bringing to account Raisi and other regime leaders for their role the greatest crime against humanity since Word War II.

Asghar Mehdizaeh, a former political prisoner, spent thirteen years in different prisons in Iran, including twelve years in the notorious Evin Prison in Tehran, and Gohardasht Prison in Karaj (west of Tehran).