This Is Why Iran Won't Negotiate with Trump 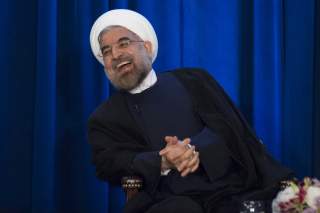 The recent exchange of barbs between Iranian president Hassan Rouhani and Donald Trump has given rise to speculations about a potential North Korea-style rapprochement between Iran and the United States following the latter’s unilateral withdrawal in May from the 2015 Iran nuclear agreement, officially known as the Joint Comprehensive Plan of Action (JCPOA). Such speculations partly stem from the fact that Trump and several high-ranking members of his administration, most recently Secretary of State Mike Pompeo, have underscored America’s readiness for a new round of talks on Iran’s nuclear programme and its regional behavior.

Tehran’s response to these overtures, however, has been one of outright rejection. In June, an open letter signed by a group of a hundred Iranian reformist politicians and activists calling on the country’s leadership to start negotiations with the United States anew was met with disdain and ridicule, with most detractors objecting that Trump is not a reliable negotiating partner.

But there is one person of note in Iran who is less concerned about Trump’s erratic character than the general hostility of the Washington foreign policy circles towards Iran—Supreme Leader Ayatollah Ali Khamenei. During the lead-up to the 2015 nuclear accord, Khamenei repeatedly warned that he considers America to be untrustworthy, and that he allowed President Rouhani’s government to pursue diplomacy with it only to satisfy the critics of his harsh stance.

In several public addresses, he also bitterly reminded his audience of the United States' long history of foul play and antipathy towards Iran. This included particularly how the Bush administration—with substantial input from then-Undersecretary of State for Arms Control and International Security Affairs John Bolton, and over the objections of Secretary Powell and his deputy Richard Armitage—scuppered an interim agreement with the European troika of the United Kingdom, Germany, and France back in 2004.

Khamenei's claim that he was personally opposed to the negotiations was, of course, a gambit meant to shore up his base in the event of the talks' failure, but it shows how pessimistic he was about the possibility of reaching a long-term settlement with the United States. Khamenei, who has the ultimate say in the direction of Iran's foreign and nuclear policy, also knows that striking a deal with Trump will not be the end of his problems. Any potential agreement with Trump, especially if it is a vague document similar to the Trump-Kim joint statement, would have to be voted on by a largely unimpressed House, and few issues can command such strong bipartisan support on Capitol Hill as opposition to Iran does.

No more helpful is the fact that such a deal is bound to be stridently decried from across the political spectrum, which may lead the next U.S. president to give it the same treatment that Trump gave his predecessor’s achievement (though probably without the fanfare of an official pullout). With his skepticism now justified, Khamenei is unlikely to allow the government to engage in further negotiations with America in the foreseeable future—a sad byproduct of Trump’s shortsighted actions.

On the other hand, Iran is probably very able to withstand a new round of sanctions for a few years. Despite the nosedive in the value of the Iranian rial—which was partly in reaction to the American withdrawal from the JCPOA—Iran's economy will be fine for the time being. This is because the absence of an international sanctions regime on Iran means Tehran will still be able to easily procure much-needed imported goods on foreign markets and conduct business with mid-sized European and East Asian companies that have little business interests in the United States.

The Trump administration’s stated aim of bringing Iran’s oil exports to a virtual standstill by  November 4 is also unlikely to materialize—though they have already suffered a drop. Furthermore, the value of Iran’s foreign exchange and gold reserves is estimated to be over $132 billion—giving it enough cash to survive two or three years even with zero oil exports. This is because the country's total imports stood at $54.2 billion in 2016.

It thus seems more than doubtful that Trump will be able to bring the Islamic Republic to its knees before the 2020 U.S. presidential election, as the Iranians are very well aware that caving into his pressures on the eve of the election would provide him with precious political capital and boost his campaign. They will, instead, stake their chances on his defeat. And if he gets reelected, he has to wait until June 2021, when the Iranian electorate takes to the polls to elect a new president, for any possible overture from Tehran.

Crippling sanctions are not likely to meet the U.S. president’s expectation that Iran will be brought into line with American regional and security interests either. Quite to the contrary, if anything the sanctions’ chokehold is more likely to elicit knee-jerk reactions from its Islamic Revolutionary Guards Corps. One would also do well to remember that Iran’s costly involvement in the Syrian civil war began at the height of Obama-era sanctions.

Trump’s gamble on the Iran deal is unlikely to pay off, but he might not be as clueless about it as he pretends. He has dismantled one of the most outstanding feats of diplomacy in recent memory, only to replace it with vague hopes of regime change in Iran.

Mehdy Shaddel is a historian of the late antique Middle East who writes on current affairs as well. He can be followed on Twitter @MayShaddel.

Image: Iran's President Hassan Rouhani laughs as he speaks during an event hosted by the Council on Foreign Relations and the Asia Society in New York, September 26, 2013. REUTERS/Keith Bedford